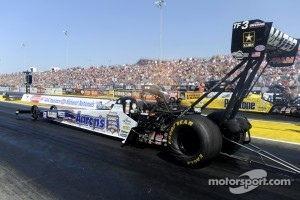 Brown’s victory in the final round came against Clay Millican in a close race. Brown’s 3.761-second pass was quicker than Millican’s pass, although Millican went faster at 319.67 mph.

It was Brown’s 22nd Top Fuel win. Gray beat Del Worsham in the Funny Car final. Gray has the distinction of having advanced to the final round in the NHRA’s Top Alcohol Dragster, Top Alcohol Funny Car, Pro Stock and Funny Car categories.

Johnson edged Jeg Coughlin in the Pro Stock final by just .0054 of a second, an estimated 20 inches. Johnson’s win was a rare hole shot victory over Coughlin, who is among the best in all of drag racing at the starting line.

Johnson’s reaction time was a near-perfect .005 of a second. It was Johnson’s 17th Pro Stock win.

Goodyear employs about 69,000 people at manufacturing plants and facilities in 22 nations. Based in Akron, Ohio, Goodyear is among the largest tiremakers in the world and is the worldwide leader in race tire innovation.