Gray to debut a brand new Chevy at the Gatornationals

There is a significant amount of excitement regarding Shane Gray and his Gray Motorsports Pro Stock team heading into this weekend’s Amalie Motor Oil NHRA Gatornationals at historic Auto-Plus Raceway at Gainesville.

Gray will debut a brand new KYMCO USA Chevy Camaro at the Gatornationals, which is the third of 24 races in the 2014 NHRA Mello Yello Drag Racing Series, while his brother, Jonathan Gray, will make his NHRA Pro Stock debut, joining Gray and Dave Connolly to give Gray Motorsports a three-car team at one of the most tradition-rich races of the NHRA season.

The way Shane Gray sees things, the only way it could get any better would be to pick up his first career Gatornationals victory. 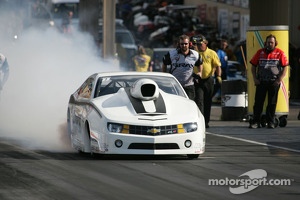 “I’m really excited about this new car and I’m looking forward to running the KYMCO colors in Gainesville,” Shane Gray said. “It’s a big race for the team, but we aren’t treating it any different than we do the rest. All of us will be out there doing the best we can, and we plan on winning.”

A year ago, Antron Brown (Top Fuel), Johnny Gray (Funny Car), Allen Johnson (Pro Stock) and Hector Arana Jr. (Pro Stock Motorcycle) were winners of the NHRA Mello Yello Drag Racing Series event, a significant note considering Johnny Gray, who retired from full-time racing at the end of last season, is also Shane and Jonathan Gray’s father. Shane Gray remembers the weekend well and would like nothing more than to keep the family in the winner’s circle in 2014.

“It was really cool seeing him win last year,” Shane Gray said. “He certainly paid his dues, so anytime he won it was real important to me. Last year was special and it all kind of started at this race for his team. Hopefully this year we’ll go to Gainesville and make him proud.”

Currently sixth in points, Gray, who has three career wins including last fall in Las Vegas, advanced to the semifinals at the season-opening event in Pomona before falling to Vincent Nobile in the second round at Phoenix.

After testing the new Camaro heading into Gainesville, Gray feels confident about how it will perform in its official debut this weekend. The next step is performing up to his ability on the starting line against a loaded class that includes reigning Pro Stock champ Jeg Coughlin. His Mopar teammate Allen Johnson was the most recent event winner in the class, while fellow Dodge driver V Gaines currently holds the series points lead.

Gray also spoke highly of his talented teammate Connolly, who is currently fifth in points and has 23 career Pro Stock wins. Together, Gray believes the team is capable of competing with anyone in the class and didn’t shy away from revealing the high expectations he has for the Gray Motorsports team in 2014.

“I really feel like this team has the potential to be as good as any two-car team,” Gray said. “I think it’s going to be real good, especially when we get a little bit of momentum coming our way. We’re still learning everybody’s personalities, learning what the cars want and learning what the engines want. Once we get there, and as long as the Gray Motorsports drivers do their part, then we’re going to be dangerous.

“The more this new and improved Gray Motorsports team runs together, the better this whole deal is going to get. We know we’re not performing up to our potential just yet, but we’re getting closer.”

John Force wrote another chapter in his legendary Funny Car career by claiming the 2013 title – his 16th Funny Car championship – and he is the early-season points leader in 2014 after winning in Pomona. Force is a seven-time Gatornationals winner, but Ron Capps and a host of others, including Force’s daughter Courtney, Alexis DeJoria, who won in Phoenix to claim her first career victory, Matt Hagan and Robert Hight are other capable winners at the ultra-fast facility.

The Amalie Motor Oil NHRA Gatornationals marks the first of 16 events for the Pro Stock Motorcycle category. Matt Smith enters the season as the defending champ, earning his second world title after winning four times in eight final round appearances. Others to watch in the two-wheel category include three-time Gainesville winner Eddie Krawiec, Andrew Hines, Michael Ray, defending event champ Arana Jr., who will be joined by his father Hector Sr. and brother Adam, and newcomer Chaz Kennedy.

The NHRA Lucas Oil Drag Racing Series and the NHRA Pro Mod Drag Racing Series, which is also making its 2014 season debut, will thrill the crowds as well during the weekend with intense competition on the track.

As always, fans will have the opportunity to interact with their favorite drivers as they’re granted an exclusive pit pass to the most powerful motorsports attraction on the planet. While visiting the pits, interactive NHRA Nitro Alley and the NHRA Manufacturers Midway, fans will also want to check out NHRA’s popular Hot Rod Junction presented by the Wally Parks NHRA Motorsports Museum that offers a spectacular display of many nostalgic dragsters, race cars and hot rods on display, including vintage machines that were driven by “Big Daddy” Don Garlits, K.S. Pittman, “Big John” Mazmanian, Bruce Larson, among others. There will also be several NHRA Legends of Drag Racing autograph sessions, allowing fans the rare opportunity to meet drag racing stars of the past.