Anderson Driven to Double-Up in Houston 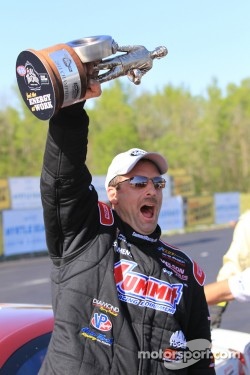 Mooresville, N.C., April 26, 2011 – By all accounts, Summit Racing Pro Stock driver Greg Anderson is among the best in the NHRA’s most competitive category. His 66 national event wins and four championships trail only Hall of Famers Bob Glidden and Warren Johnson in the all-time rankings for the “factory hot rods”, with his 11-year streak of winning at least one race (extended two weeks ago with his win in Charlotte) the longest active run among all professional categories. Even so, as the Full Throttle Drag Racing Series heads to Baytown, Texas for this weekend’s O’Reilly Auto Parts Spring Nationals, the defending Pro Stock champion is quick to deflect any personal praise or predictions of success, preferring instead to credit his crew while maintaining the same aggressive approach to competition that he has used since first climbing behind the wheel.

“I work very hard at being a better driver, because in this class it can often be the deciding factor,” said Anderson. “That’s why I approach every race feeling like I am the underdog. I know my boys are going to give me a great Summit Racing Pontiac, which in turn puts the pressure on me to do my job. Knowing that, I stay driven to perform at my very best so I can help put us in a position to win.

“As tough as the competition is right now, you have to have the complete package. You’re not going to win because you have more horsepower, or a better car set-up, or even a better driver. You have to put all three together it you want to get the Wally, with no room for error.

“Take our last race in Charlotte. From the first round forward, every quad was filled with potential race winners. Fortunately, even though everybody we raced did a great job, this KB Racing team was able to deliver when it needed. With a great hot rod underneath me, I was able to concentrate on my driving and things ended up going our way. It’s the same game plan we’ll be using in Houston, where we hope to get similar results.”

Having conquered the four-wide format, Anderson and the world’s best quarter-milers will return to the conventional two-by-two racing this weekend at the recently renamed Royal Purple Raceway, where a totally different challenge awaits. Although the sea level altitude will provide maximum power for the normally aspirated contingent, the KB Racing crew will have to quickly find the proper tune-up to transfer the added horses to the tricky Baytown racing surface.

It’s a very tough racetrack, and to win we’ll have to manage it better than the rest of our competition.

“Going back to two-wide racing, the first qualifying session in Houston is going to seem a little quiet with only one other car to worry about,” joked Anderson. “The one thing that will remain the same, however, is that someone is going to win the race, and we want it to be one of our Summit Racing Pontiacs. It’s a very tough racetrack, and to win we’ll have to manage it better than the rest of our competition.

“Racing in Baytown offers numerous challenges, testing the teams’ ability to adapt their cars to the racing surface. We’ll make good power because we’re at sea level, which makes it even tougher to negotiate the racetrack, but also makes it a lot of fun, because we certainly don’t like to run slow. The cars will run fast, but be finicky, so it’s going to fall into the crew chiefs’ hands to make the most of it. Fortunately, I think I’ve got the best in the business. This team is performing at a high level right now, thinking properly and not making a lot of mistakes, which shows on the racetrack, so I’m definitely looking forward to this weekend.”