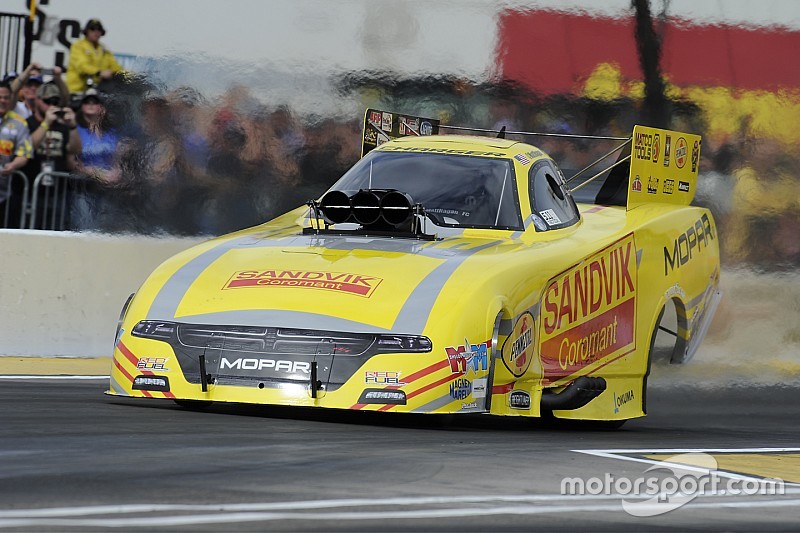 Matt Hagan’s 3.878 at 330.88 in his Sandvik Coromat Dodge Charger R/T was enough to narrowly beat Don Schumacher Racing teammate and reigning champion Ron Capps 3.883 at 330.88 in a thrilling final round. To get there, he had to beat Cruz Pedregon, 2016 Arizona Nationals winner Tim Wilkerson, and P1 qualifier Tommy Johnson Jr.

Said Hagan afterward: “It’s just great, we got ourselves a hotrod right now. The car is running strong. My lights are on point right now. I’m just feeling it, feeling this racecar, this team.

“We’re just digging. Everybody is working hard. The car is going down the racetrack every lap. How much more could you ask for? It’s a great feeling to crawl in the car with the confidence that it’s going to run strong and then when your lights are good it’s a real hard combination to beat.”

Leah Pritchett didn’t quite beat her 3.658-sec record from earlier in the weekend but she didn’t need to in order to become the first Top Fuel driver since Gary Scelzi in 1997 to win the first two races of the year.

Just like last year, Pritchett defeated Brittany Force in the finals with a 3.705-second pass at 328.22mph in her DSR Papa John’s Pizza dragster earned her the third victory of her career, and in another great final, Force came up just 0.001 short, losing to Pritchett on a holeshot.

“I’m learning to do what it takes to get into that extreme, severe mindset of what it takes to do what we’re doing,” explained Pritchett. “Honestly, I’m trying to keep up with my team and make them proud of me as a driver and do the job that is expected of a Don Schumacher racing team.

“And I think we’re doing pretty OK with that. We’re blessed with the equipment and the talent capabilities of the people and everyone that it takes to make it. I’m happy I can hold up my end of the bargain.”

Anderson raced his Summit Racing Equipment Chevy Camaro to a 6.547 at 211.43 to defeat Drew Skillman and his Ray Skillman Auto Group Chevy Camaro’s 6.565 210.50 for the 87th victory of his career and second at Wild Horse Pass Motorsports Park. It was Anderson’s 140th final round.

“It was brutal today, but I knew it was going to be coming in,” Anderson said. “The class is awesome right now. I think every race I had today was decided by less than a foot.

“You just don’t get better racing than that. It’s fantastic out there. It’s just a battle royale every time you stage the car. Anybody can win and that’s what it’s all about. ”

Anderson defeated Kenny Delco, Shane Gray and rookie Tanner Gray in the quarterfinals and semifinals on his way to the final.

Johnson Jr., Pritchett and Line are No. 1 qualifiers Saturday at Arizona Nationals