Hagan vs. Force: NHRA Funny Car championship finale could be a stellar battle 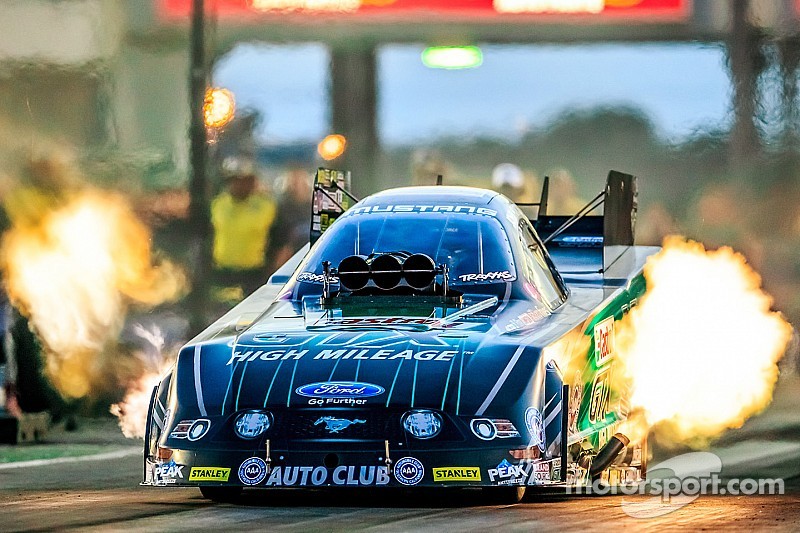 With recent history in mind, it is not surprising the 2014 NHRA Mello Yello Drag Racing Series Funny Car world championship is coming down to another thrilling battle between Matt Hagan and reigning world champ John Force.

The two talented Funny Car stars have duked it out on an almost annual basis during the Mello Yello Countdown to the Championship, with 2012 being the lone exception. The 2014 edition could be the most memorable of all, which would prove fitting for this weekend’s 50th anniversary of the Auto Club NHRA Finals at historic Auto Club Raceway at Pomona.

Hagan, who won the world championship in 2011, leads 16-time champion Force by just 21 points heading into the final event of the season, which means a finish for the ages could be coming this weekend. As expected, Hagan would not have it any other way.

“Me and John have been battling it out four years out of the last five of my career, and John has won two, I've won one, and I'm planning on winning this one,” Hagan said. “I don't plan on walking away with one championship. I plan on having multiple. So I have to dig deep and work hard and do whatever it takes to do that. John brings the best out of me.

“I've got a lot to show and a lot to give and a lot to prove. But I think it's just good racing for the fans. It's coming right down to Pomona. They're getting what they paid for, and it's going to be one hell of a show, and I'm excited to see it myself.”

Shawn Langdon (Top Fuel), Hagan (Funny Car), Rickie Jones (Pro Stock) and Eddie Krawiec (Pro Stock Motorcycle) were last year's winners of the season-ending race that will once again be televised nationally on ESPN2.The 50th anniversary of the Auto Club NHRA Finals will also get a marquee main event of Hagan and Force trying to ward off each other – as well as the rest of the deep and talented Funny Car field – to claim the world championship.

It is a routine Force has mastered routinely throughout his legendary career, topping Hagan in 2010 and last year down the stretch. But as Hagan continues to improve it doesn’t get any easier for Force, who knows his 10,000-horsepower Castrol GTX Ford Mustang will have to be in prime form to make up the gap. That said, Force knows being too consumed in what lies ahead is a surefire way to lose a mental edge that will be needed all weekend.

“If you wrap your head up in it, all the things that could go wrong or go right will go through your head, none of that does any good,” said Force, who has three wins and 11 final round appearances in 2014. “I've got a good race car, and we're going to give the fans what they want, and that's a race, and we're going to entertain them, and at the end the champ will walk away. If I start thinking, ‘I’ve got to beat this kid,’ then it starts getting mental. I'll wait until race morning, Sunday morning, and that's when I'll put on game face and I'll go after Matt Hagan, because I am chasing him.”

Force became the hunter when Hagan won in Reading to jump into the series points lead. Force narrowed the gap with a final round finish in Las Vegas, but Hagan and his team have been strong when it counts in 2014, advancing to three finals and winning twice through five races in the Countdown to the Championship.

Force, though, has always delivered at Pomona as his NHRA-best 15 wins at the famed facility attest. It shows Force’s uncanny ability to finish strong on a consistent basis and that will likely again be the case this weekend. But being at his best also means worrying about everyone in the field and not just Hagan.

A minor lapse in concentration could be a major downfall for either Hagan or Force, especially dealing with the likes of Courtney Force, who trails Hagan by 121 points, Robert Hight and Tommy Johnson Jr. Other Countdown competitors include Worsham, Ron Capps, Tim Wilkerson, Cruz Pedregon and Alexis DeJoria.

Hagan and his 10,000-horsepower Mopar Express Lane/Rocky Boots Dodge Charger led the points for most of 2013 before Force’s late surge. The tables have been reversed this season and Hagan has noticed a quiet confidence from his team, which is led by crew chief Dickie Venables.

“We're driven to go out and get this thing done,” Hagan said. “It's just kind of one of those deals everybody is kind of silently brewing, hungry, ready to go race this last race.”

That calm approach is also evident in Hagan, who has built on the lessons he has learned over the years from battling it out with Force. How that translates on the track will be determined this weekend but Hagan likes his chances.

“I believe in my team and I know that we've got the stuff and what it takes to get it done,” Hagan said. “We're going to have a battle on our hands with John, but we're not racing John, we're racing the racetrack and we're racing our race car. As long as we go out there and race as hard as we can and get as much E.T. on that racetrack as we can, it's going to take care of itself. Like I said, the calmness, it comes from confidence, and the confidence comes from Dickie Venables and knowing that he's up there making the right calls.”

In Pro Stock, one of the most intense playoff battles could be settled at Pomona. By winning in Las Vegas, Erica Enders-Stevens, who has five wins this season, took over the points lead from Jason Line. Enders-Stevens is trying to become the first female to win an NHRA world championship title in Pro Stock and leads Line by 17 points. Dave Connolly is 84 points back in third, while other Countdown participants are Shane Gray, Allen Johnson, Vincent Nobile, V Gaines, Chris McGaha and rookie Jonathan Gray.

The 2014 world championship in Pro Stock Motorcycle is coming down to Screamin' Eagle Vance & Hines Harley-Davidson teammates Andrew Hines and Krawiec. Hines currently holds the points lead over Krawiec and stretched his lead to 92 points by winning in Las Vegas. It will set up an exciting duel in Pomona, as both riders are looking for their respective fourth world championship titles.

As part of the 50th anniversary celebration, NHRA will feature many of the sport's greatest legends and those drivers will share some of their favorite memories from 50 years of the Auto Club NHRA Finals. "The King of Speed" Kenny Bernstein, "Big Daddy" Don Garlits, "TV" Tommy Ivo, Tom "The Mongoose" McEwen, Ed "The Ace" McCulloch, Shirley "Cha Cha" Muldowney and Don "The Snake" Prudhomme will be featured during the event and participate in a series of special NHRA Legends Chats and a special autograph session on Saturday afternoon in the popular Hot Rod Junction.

The NHRA Legends Chats will run from 10 a.m. until noon on Saturday and the special legends autograph session will take place between Saturday's pro qualifying sessions. Fans can attend the Legends Chats and autograph session by obtaining a special commemorative 50th Anniversary NHRA Legends Card, which will be available on a first come, first served basis at the Hot Rod Junction.

NHRA fans also will play an important role in the 50th anniversary celebration as they will help decide the most iconic moments in the history of the Auto Club NHRA Finals. Fans can vote for their favorite moment from the event via interactive pages set up on NHRA.com and via NHRA's Facebook page.

Special celebrations throughout the weekend are scheduled to highlight this significant milestone event. In addition to the NHRA Legends Chats and special autograph session featuring the legends, there will be several NHRA-exclusive Cacklefests showcasing the vintage dragsters of the sport's early days, a special car corral in the Hot Rod Junction featuring a wide variety of vintage dragsters and classic race cars and The SealMaster Track Walk, where fans can walk on the famed Auto Club Raceway at Pomona track prior to Sunday's final eliminations. The SealMaster Track Walk also will feature several of the sports legends.

As always, fans will have the opportunity to interact with their favorite drivers as they're granted an exclusive pit pass to the most powerful and sensory-filled motorsports attraction on the planet. This unique opportunity in motorsports gives fans direct access to the teams, allowing them to see firsthand the highly-skilled mechanics service their hot rods between rounds, and enjoy some cherished face time and get autographs from their favorite NHRA drivers.

Jerry Savoie hoping to end 2014 on a high note

NHRA closes out season at Pomona with championships on the line