For NHRA Funny Car racer Mike Neff, a state of total exhaustion has proven to be a good thing.

At the end of each NHRA Full Throttle Drag Racing Series event, if Neff’s tired-meter is pushing extreme limits he knows it has been a good weekend. 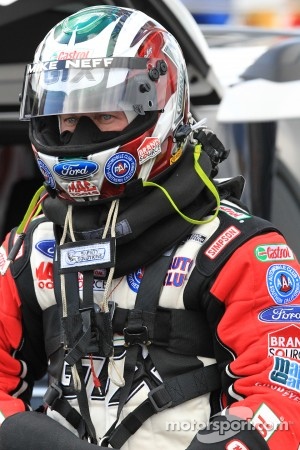 Castrol GTX Ford Mustang pilot, Mike Neff, preparing for his reentry into competition as a driver

And for the last four races, the throwback racer who has come to define NHRA’s 60th anniversary celebration so far by pulling double-duty as both crew chief and driver like so many NHRA legends in the sport’s early days, has had some really good weekends in his Castrol GTX Ford Mustang.

Neff has raced to four straight final round appearances, posting a victory at the NHRA SuperNationals in Englishtown, N.J. two weeks ago. It was his second victory of the season as the California native who now calls Fishers, Ind. home holds the series lead in the Funny Car category as the regular season heads down the backstretch.

“I am getting in the groove,” Neff said. “Going rounds helps. That is four finals in a row. My team is in the groove of what they have to do. I am getting into the swing of it too. Going to the final takes a lot out of you. We have been training for this lately the last four races.”

Neff, who guided Force to the world championship title last year as crew chief, moved into the dual roles this season when Force’s daughter Ashley moved out of the cockpit of one of the team’s 7,000 horsepower Funny Cars for the season to focus on starting a family.

Driving the car was nothing new for Neff, who raced to one win in six final rounds during two seasons behind the wheel in 2008 and ’09. In ’08 at Bristol Dragway he was the No. 1 qualifier and posted a runner-up finish to Melanie Troxel in a very late night rain-delayed finish.

While he may have been tired as he launched his car in that final round well past midnight back in ‘08, nothing has compared to what he has endured this season while juggling a wrench in one hand and his race helmet in the other.

“Trying to do both (jobs), it just wears you out,” Neff said. “I’m working on trying to get myself to be able to go the distance all year long, both mentally and physically. My goal is to feel as good on the last run on Sunday as I do on the first one.”

Neff has captured two world championship titles as crew chief, as he claimed his first with Gary Scelzi in 2005. If he can win the Full Throttle Countdown to the Championship this year, he will be the first to win a season crown pulling double-duty since Eddie Hill (’93), Dick LaHaie (’87) and “Big Daddy” Don Garlits (’85-’86) accomplished the feat in Top Fuel. Only Shirl Greer (1974) has done it in Funny Car.

“Doing both jobs just puts more pressure on you,” Neff said. “I’m more tired at the end of the day. When I was just the crew chief, I was busy, but I had down time where I could just chill out.

“(Now) I’m running up there looking at the track. I’m trying to figure out the set up, I’m trying to tell everybody what they need to do and then, at the last minute, I’ve got to throw on my crap and get in the car.”

Once he’s strapped in the car, he has to change gears and put on his game face for driving the car and get ready to battle a host of tough challengers, including two-time champ Cruz Pedregon, speedy Matt Hagan, consistent Jack Beckman, veteran Ron Capps, ’09 champ Robert Hight and his boss, the 15-time champ.

“I just want to be a contender and have a chance,” Neff said. “Right now, I’m rooting for my teammates, especially Force, to get rolling because it’s going to take all three of us thumping for one of us to win the championship.”

Jason Line is one of six winners this season in a parity filled Pro Stock division, however Line holds the edge as the only driver to earn multiple victories. Line, a former engine builder for Joe Gibbs Racing on the NASCAR circuit, has raced to three wins in his Summit Racing Pontiac GXP. Second place Greg Stanfield has yet to win but has been consistent in his Safety Sentry GXP. Defending world champ Greg Anderson is a two-time winner at Bristol as is defending winner Edwards in his Penhall/Interstate Batteries GXP. Hometown favorite Allen Johnson has some momentum after his win in New Jersey two weeks ago and a host of young drivers, including rookie Vincent Nobile, Erica Enders and Shane Gray, are trying to better their positions in the series standings.

Pro Stock veteran Allen Johnson has proven in the past that his team can rise to the occasion and win races when absolutely necessary.

The nine-time NHRA Pro Stock winner will try to channel that focus and determination this weekend at the 11th annual Ford NHRA Thunder Valley Nationals presented by Tri-Cities Area Ford Dealers, June 17-19 at his hometown track, historic Bristol Dragway. Tony Schumacher (Top Fuel), John Force (Funny Car) and Mike Edwards (Pro Stock) are the defending winners of the event which will be televised on ESPN2 HD.

A native of nearby Greeneville, Tenn., Johnson would love to win at Bristol so he could celebrate with a large gathering of his family and friends who will be at the track to support him in his quest to win a race that he’s wanted to win since Bristol was added to the series schedule in 2001. 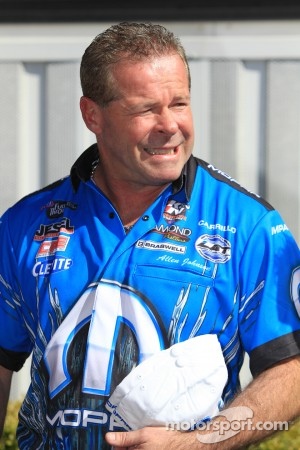 Johnson sits in perhaps his best position yet to pull off the mission as he’s still riding high from winning the NHRA SuperNationals two weeks ago at Englishtown, N.J.’s Raceway Park.

“Momentum in racing anytime is great, but to have some heading into your home race is even better,” Johnson said. “The car is very consistent right now and we can continue to fine tune it and learn things. We are really looking forward to heading to Bristol and hopefully we can keep it going for Mopar and Dodge, and make it two wins in a row.”

At Englishtown, Johnson beat rookie phenom Vincent Nobile in an all-Dodge final round. The win moved Johnson to seventh in the point standings, up from outside the top 10 earlier in the season. Johnson never panicked due to his team’s slow start which included three first round losses in the first five races, because he knew there would be some growing pains as the team worked diligently to introduce a new chassis for the J&J Racing/Team Mopar Dodge Avenger.

“I was ready for this start,” said Johnson, who has raced full-time in NHRA since 1997. “We knew we had the chassis in the development stage and it was going to take some time. We wanted to be good by this time of the year and be great by the time the Countdown (to the Championship) starts. We’ve had a couple of bad breaks that have cost us, like at Topeka when we had a fast car and the engine gave up on us. Overall we’re pleased.”

As the regular season moves into the second half, only a handful of races remain until playoff time. Johnson, who finished sixth in the standings last year after having one of the most consistently fastest cars in the regular season, wants to change that outcome in this season’s six-race Full Throttle Countdown to the Championship. Johnson says his plan for the new car is nearly complete.

“This Mopar Dodge Avenger has been fast, and we always have plenty of power with the Mopar HEMI under the hood,” Johnson said. “We have been taking a different approach this year and have been working into developing a good product with this new chassis. I think we are almost there, but not quite. We are almost where we want to be with six races left until the Countdown. We are still refining things, and continue to work hard each and every day.”

Other pre-race favorites in Pro Stock include series leader Jason Line, a three-time winner this season in his Summit Racing Pontiac GXP. Line's teammate, defending world champ Greg Anderson, is a two-time Bristol Dragway winner, as is defending race winner Edwards. Two prominent drivers in the 200 mph category have been running strong this season and are looking for their first career victories, including national record holders Rodger Brogdon (6.495 seconds) and Erica Enders (213.57 mph). Rookie candidate Nobile has been to four finals with one victory and sophomore standout Shane Gray won earlier in the year at Topeka in his Service Central GXP.

Mike Neff has been pulling double duty as both crew chief and driver for his Castrol GTX Ford Mustang and all the hard work is pulling off for the former Auto Club Road to the Future Award winner as he currently leads the Funny Car point standings. Neff has a four-race final round streak going and is red hot after winning the last event, in Englishtown, N.J. His championship challengers will need to step up the pace to slow his charge. Jack Beckman and Robert Hight, sit second and third in the point standings and are also multi time winners this season. Cruz Pedregon’s Snap-on Tools Toyota may be the quickest of the category but the two-time world champ is still looking for his first victory of the season after posting two runner-up finishes. You can never count out the top two from last season, defending world champ John Force, a three-time winner at Bristol, and local favorite Matt Hagan, a Christiansburg, Va., cattle rancher who drives the ultra-quick DieHard Dodge Charger on weekends. 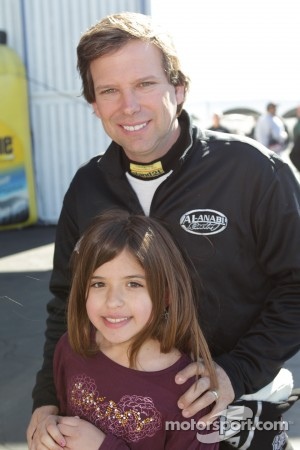 Del Worsham and his daughter