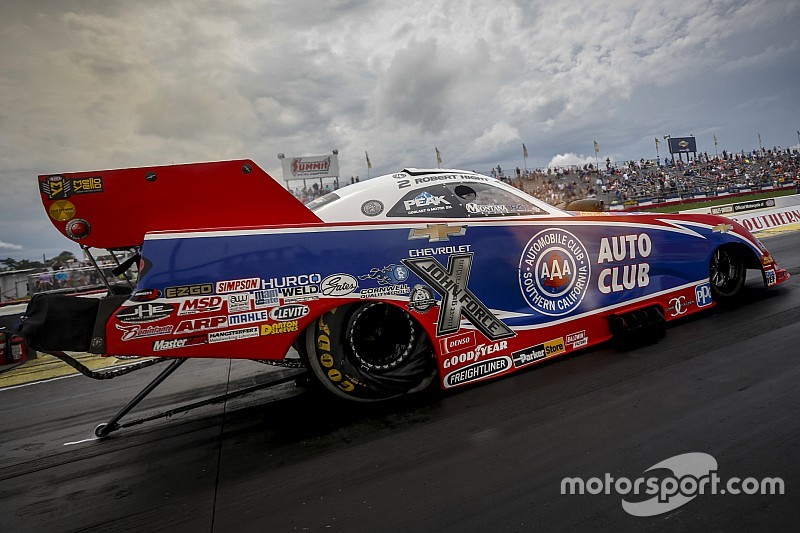 Hight, the current points leader, qualified #1 in his Auto Club Chevrolet Camaro SS and earned his fifth win in 2019 by going 3.973-seconds at 325.45 mph in the final round against Matt Hagan’s 4.030 at 316.60. With the victory, Hight’s second straight at Sonoma, the two-time world champion became only the third driver in Funny Car history to reach 50 career wins.

To get there, he beat Blake Alexander and Tommy Johnson Jr., while Hagan picked up his 58th final-round berth with round wins against J.R. Todd, Jack Beckman and John Force. Hight and Johnson also clinched spots in the Mello Yello Countdown to the Championship.

“The first national event I ever attended was right here, and I never honestly dreamed I would get to drive a Funny Car,” said Hight, who now has three wins in Sonoma. “I still have to pinch myself. It’s hard to believe I’m at 50 (wins).

“Matt Hagan had the best car out there in the second and third round, and we had to step up in the final. We didn’t want to get outrun, and we really pushed in the final and got the win.”

Torrence scored his second win this season and third in his career thanks to his final-round run of 3.804 at 320.20 in his Capco Contractors dragster to beat No. 1 qualifier Clay Millican’s 3.842 at 321.65. To reach the final round, B. Torrence beat Steve Faria, Austin Prock and his son, points leader and defending champ Steve Torrence. It ended S. Torrence’s impressive string of nine straight final rounds in 2019, while Millican beat Brittany Force and Antron Brown to earn his 16th career finals appearance.

“We had a good car going into raceday and we were just steady,” B. Torrence said. “We had a really tough race against Steve, and we knew Clay had a good car. It took it all (to beat him). We have a good car and we’re capable of winning everywhere we go.

“I couldn’t do this without Steve’s team and it takes all of those guys. They make certain I have a very well-prepared car every time I show up, and they make me look good.”

Anderson kept his hopes alive to sweep the Western Swing after winning his second straight race this season and 93rd of his career. He went 6.602 at 208.71 to beat No. 1 qualifier Alex Laughlin in his Summit Racing Equipment Chevrolet Camaro in the final round. Anderson, who is the only driver in Pro Stock history to sweep the Western Swing, will have a chance to follow his 2004 sweep next weekend in Seattle.

He reached the final round with victories against Kenny Delco, Jeg Coughlin Jr. and teammate Jason Line, while Laughlin beat Val Smeland, Erica Enders and points leader Bo Butner to reach his sixth career final round. Butner also earned his spot in the Countdown to the Championship.

“It’s been a long time since I won two races in a row and it’s more of a mind game than anything, and you’ve got a find a way to get that right,” said Anderson, who has a class-best six victories at Sonoma.

“This is going to do a lot for me. Sonoma has always been one of my very favorite tracks on the circuit. I love the tracks where the cars run fast. As two races have shaken out, I’m the only guy standing with a chance to (sweep the Swing), and I’ll go into Seattle with a smile on my face, eager to race and see if the cards can fall the right way again.”

Points leader Andrew Hines made it a double-win weekend by earning his seventh victory of 2019 and 55th in his career with a 6.790 at 198.00 on his Screamin’ Eagle Vance & Hines Harley-Davidson FXDR in the final round to beat Matt Smith’s 6.822 at 197.36. It follows Hines’ win in the Mickey Thompson Pro Bike Battle on Saturday, and gives the winningest rider in class history the Pro Stock Motorcycle version of the Western Swing sweep.

Hines won last weekend in Denver and the class doesn’t race next weekend in Seattle. The seven victories are also a career-best in a single season for Hines. He beat Kelly Clontz, Scotty Pollacheck and Jerry Savoie en route to the final round, while defending world champ Smith beat Jianna Salinas, Ryan Oehler and Hector Arana to advance to his 53rd final round. Eddie Krawiec, Smith and Hector Arana Jr. all clinched berths in the Countdown to the Championship this weekend.

“It’s absolutely mind-boggling what we’ve been able to achieve this year,” said Hines, a three-time winner in Sonoma. “The confidence with my motorcycle and my team, and the level of performance and professionalism the guys bring to the starting line every single time, it’s unsurpassed right now.

“I can sit on that starting line with confidence and it’s just unreal. I feel I’m probably riding the best in my career and I just want it that much more.”

* Clinched berth in NHRA Mello Yello Countdown to the Championship