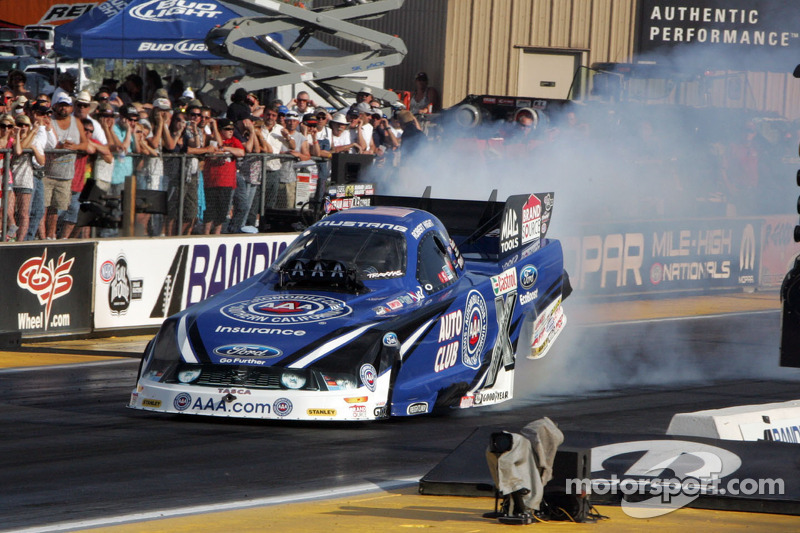 Robert Hight will enter the 48th annual Auto Club NHRA Finals with a number of goals. While Hight is out of contention for the 2012 NHRA Full Throttle Funny Car championship he has a teammate, Mike Neff, in the thick of the championship battle. Hight and the rest of the John Force Racing Funny Car contingent will be focusing on trying to take out points leaders Jack Beckman and Ron Capps early so Neff can have a shot at his first championship as a driver. 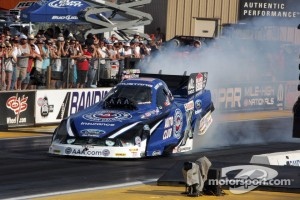 “Every race we enter with the Auto Club Ford Mustang our goal is to qualify No. 1 and win the event. This race we want to hopefully get Beckman or Capps in the first round and take them out to help Neff. We saw John Force come back in 2010 for the championship so I have every confidence in Neff and his guys,” said Hight.

In addition to trying to take out Neff’s competition Hight wants to move up the point standings and secure a top five points finish. He is currently tied in 7th place with boss and teammate John Force.

“We got off to a really hot start this season and we won four races in a row. These Funny Cars are constantly changing so we just struggled in the middle of the season and never really got a handle on it in the Countdown,” said Hight. “The biggest thing I think is we never gave up and we are figuring some of the problems out. We tested after Las Vegas and we are going to test after Pomona. This will be an exciting off-season even though it was a frustrating season.

Every season of Hight’s career he was won at least four races and he has the chance to equal Neff’s 2012 win total of five if he gets the Wally this weekend. Hight will have a busy week leading up to the racing action. On Wednesday night Hight will drop the puck at the ECHL Ontario Reign hockey game versus San Francisco Bulls. On Friday he will start the day on KTLA’s morning show live from Auto Club Raceway at Pomona and he will close the day as a panelist at the Night of Champions at the Auto Club Museum.

“I love racing at Auto Club Raceway at Pomona. It is my sponsor’s race so you want to do well but there also seems to be so much going on in addition to all the championship battles. I am going to the hockey game in Ontario and then we have the Night of Champions event on Friday. These are some great fan events plus you’ll have awesome racing action. Every round of qualifying will be critical and then the race on Sunday will be pressure packed,” added Hight.