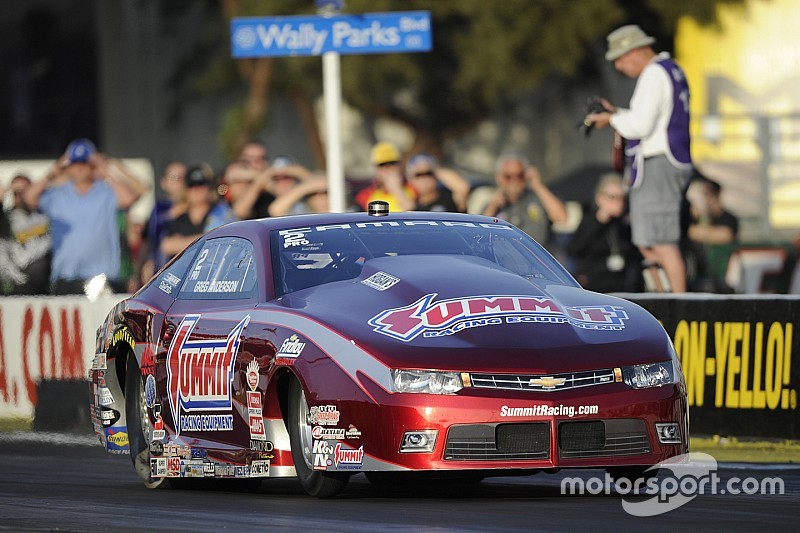 The cars aren't nitro-fueled, but NHRA's Pro Stock class has presented the most intriguing technical challenge of the 2016 season. On the eve of Round 2, Annie Proffit looks at the new hurdles facing PS racers.

This weekend’s second race of 24 in NHRA’s Mello Yello Drag Racing series takes place at the site of pre-season testing, Wild Horse Pass Motorsports Park, formerly known as Firebird Raceway. With the event starting on Friday and running through Sunday, there are currently a full complement of 16 entries each in the nitro categories: Top Fuel and Funny Car.

Yet where the entrylist takes a dip is Pro Stock which is undergoing a near-complete culture change in 2016. At the season starter, the 56th Winternationals on the Auto Club Raceway at Pomona dragstrip, Pro Stock had a good turnout for its reinvention, with 16 racers on the premises and ready for final eliminations on Sunday morning.

There were hiccups in that first race - as everyone anticipated - with two-time and reigning titleholder Erica Enders-Stevens unable to post an effective quarter-mile pass in the first round as she raced teammate and five-time Pro Stock champion Jeg Coughlin Jr. in a pair of Dodge Dart racecars. In the second round, 2012 champ Allen Johnson was unable to complete his run and Coughlin fouled. And throughout the field, elapsed times ran about a 0.15 seconds behind what the cars were turning in 2015.

So why the sea-change? Because last year Pro Stock ran carburetors where electronic fuel injection is now decreed, had no limitation on rpm levels as opposed to the current 10,500rpm maximum and had longer - by two inches - wheelie bars at the rear of the cars. These rules have even changed the appearance, as the bulbous air intakes on the hoods are now part of Pro Stock history.

The final at Pomona saw Summit Racing teammates and multiple champions Greg Anderson and Jason Line competing against one another, and their rivals saw the irony, if not the funny side of this. Summit Racing had (a) run the highest rpm levels prior to 2016 – some said they were close to 12,000 rpm – and (b) complained the loudest when new rules were announced.

Yet by not changing other competitive aspects of the team, this group were able to make appropriate mechanical adjustments and be prepared for the first race better than their competitors.

A lack of competitiveness has forced Shane Gray to reevaluate his package in Pro Stock. Currently running a Chevrolet Camaro just like Summit Racing’s three entries (Bo Butner is in the third car), half of Elite Motorsport (Drew Skillman and Vincent Nobile), Alex Laughlin, Chris McGaha, Aaron Strong, Joey Grose and Matt Hartford (the latter ably assisted by Warren and Kurt Johnson), Gray announced he’d skip the Phoenix race to “refine” his tune-up in time for Gainesville next month.

While Gray made it to the quarterfinals before being ousted by Butner, he believes there’s work to be done. The four-time race winners declared:

“We just were not happy [with the tune-up at Pomona], and knowing everyone else will likely get better as the season moves along only amplified the thought that we need to catch up right now.

“I enjoy drag racing but not enough to be out there just for the sake of making qualifying passes, waving to the crowd at driver intros and then hoping for the best on race day. We’re out here to win; if we’re not in position to put our sponsors in the winner circle every time we pull through the gates, then we don’t need to be here.”

The Pro Stock community shrank going into the new season with Gray’s brother Jonathan on the sidelines and with two-time 2015 winner Larry Morgan unable to make the bell when his sponsor left him high and dry a week before the first race. Morgan wasn’t about to spend his own money to race, and thereby missed his first Winternationals since 1984.

While some have dropped out due to technical changes or foundering fortunes, reigning champ Erica Enders-Stevens celebrates her 200th race in NHRA’s Pro Stock category this weekend at Phoenix. She wasn’t happy with the pace of her car at Pomona, nor the aforementioned loss to Coughlin in the first round, so can only hope to add to her 21 victories, 14 runner-up finishes, 18 No. 1 qualifiers and an overall 217-128 win-loss round record.

Elite has seven championships on the Mopar side of its workshop but Coughlin noted the engines used at Pomona were “literally just assembled. There was simply no time left to test or dyno anything, so the guys put in their best effort and we did the best we could under the circumstances. His -0.002sec jumpstart in the second round rendered it a moot point as to whether he would have ultimately had anything for Summit Racing, but we should get a clearer picture of his potential this weekend.

Former Mopar factory driver Allen Johnson, still in a Dodge Dart, had a mechanical mishap in the second round in Pomona, giving Line a free pass. The Greenville, Tenn. native thinks he’s got a handle on the car, but declared: “To win in Phoenix, we just need to make four good qualifying runs and learn on each of those runs to get faster. Then, we can go into race day with a great setup and all the gremlins gone.”

Will another driver come out of the woodwork to give Pro Stock a full 16-car field this weekend at Wild Horse Pass Motorsports Park? To be honest, that’s almost incidental to the technical intrigue in the category right now. NHRA qualifying takes place on Friday and Saturday at 1:30 and 4pm MST and eliminations begin at 11am on Sunday.

Records are made to be broken… but like this?