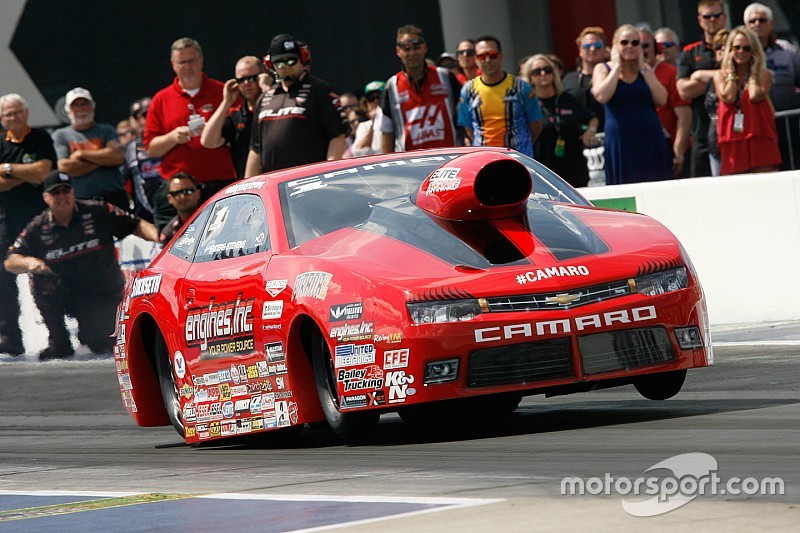 MODERATOR: Erica is the driver of the Elite Motorsports Chevy Camaro and claimed her second Pro Stock world championship with nine victories and 11 final-round appearances during the season. She has 21 career victories, which is the most by any female Pro Stock driver, and is now second on the all-time female win list behind Angelle Sampey.

Erica, another incredible season for you and your Elite team, just wrapped up on Sunday. Have you had a chance to process it all yet?

Erica Enders: Not really. I've been super busy since all of that happened with SEMA. Flew to Houston late last night, got meetings and stuff today. I haven't had some downtime for it to set in. But Sunday was just an incredible day. To be able to lock up the championship after winning second round when my teammate Vincent (Nobile) beat Greg (Anderson), going on to win the race, it's just like all this stuff is so storybook, so awesome. I'm really blessed to be a part of a great team and great organization at Elite Motorsports. Our season's not over yet. We get to go to Pomona next week and plan on winning that one, too. We'll see how it goes.

How does the team stay hungry for Pomona?

We're all racers. We all grew up at the racetrack. I started in a junior dragster. Rickie Jones was at the track when he was a little kid as well. We stay hungry because it's our passion and we want to be the best. My guys are perfectionists. We go out and make an excellent run and win the race, then come back and analyze the data and say, We needed to do this and that. They just want to be perfect. Even though we were the best that day, they want to get better.

I'm the same way as a driver. I want to go in and just do the best that I can for the guys that work so incredibly hard for me. Yeah, I mean, we're going to go to Pomona. We accomplished what we wanted to as far as the championship is concerned. That pressure is off of us. But we definitely want to go out there and finish the season strong.

Looking through your numbers, it seems incredible that 2012 was your first race win. To go from 2012 now, two championships, 21 victories, talk about the last couple days being a whirlwind, but what has this been like to be right in the middle of all that?

It's pretty surreal, to be honest. I mean, I spent my entire career trying to get to this point. I've said it a million times before, but I've had way more valleys than I've had peaks. It took me seven years trying to make Pro Stock work in order to get my first win. It just seemed like an eternity. Once that first win happened, I won a handful of races over at Cagnazzi's. My career took a turn for the best when I joined Richard Freeman and Elite Motorsports. It just goes to show with the right people, anything is possible. Money and sponsorship doesn't hurt, horsepower doesn't hurt, but those things don't win races, those things don't win championships. It's been proven over and over again because the most wealthy guys in the sport haven't been able to get it done.

We run on a very limited budget and we've been able to do it. It's just the right group of people in the right places. We have great team chemistry. We've gelled so well. We work well together. We trust each other. Most importantly, we have fun. Having that much fun I feel like makes us even more successful on the racetrack. It has been a whirlwind to have been able to win 21 Pro Stock races in three years. It's crazy. I had always hoped, but I never thought it would happen. Just goes to show that God's timing is perfect.

I don't know. That's a tough question because, I mean, being able to accomplish what we did in the fashion that we did it in 2014, I didn't think it could ever be topped. The first is always the best and the most memorable. But having the second and doing it back-to-back is pretty cool because I wanted to prove so badly that it wasn't a fluke and that we do mean business. My guys are just incredible. The most important part of it is being able to enjoy the success with the people I care about the most.

Last year, having it go down to the final round at the final race of the year, then this year it was so different because we were able to lock it up in Vegas with one more race to go. So we'll go into Pomona kind of with a little bit of weight off our shoulders. At the same time, I just mentioned, we want to go out to Pomona and win that race as well. My guys are perfectionists and extremely competitive. To be able to do it back-to-back says so much about our team and what we're capable of.

From the short time from Las Vegas when you clinched the title for this year till now, have you been surprised by anyone at all who contacted you to congratulate you?

No. I mean, not really. I've gotten to spend some time with Shirley Muldowney since then. We did an event at SEMA yesterday. She's in my hometown of Houston today, we're having a luncheon together. Pretty cool to have somebody I've looked up to, mentored me, she's been one of my biggest supporters. That's been pretty awesome and surreal.

A ton of phone calls, thousands of emails and text messages. I spent the last two days at SEMA at Las Vegas, you can't walk three feet without stopping and talking to somebody. It just shows that our fans are so loyal and they are so supportive of our sport, it's pretty neat.

This may be a little in advance, but how much hungrier does this make you to want to add championship number three and four and as many as you possibly can?

I definitely want to strike while the iron's hot. We've got such a great program. It does make me more hungry. I didn't think I could want anything more than I wanted the 2014 championship. But this year when we came out, I made a decision that I was going to play with all the heart that I got. I drove so much better this year than I drove last year. I drove good last year, but this year I drove even better. I really stepped up to the plate, and so did my guys. We struggled so much with the two new rule changes with the fuel and the tire this year.

Next year the rule changes are going to be even more intense with going to fuel injection, having a 10, 500 rpm limiter, shorter wheelie bars. The rules are absolutely crazy. Having said that, I feel like I have the smartest and best guys in the business on our side. So I know our off-season is going to be full of a lot of hard work and testing. I feel like we can crawl our way back up to the top, and definitely it's going to make us more hungry to prove that we can do it over and over again.

For the first time in the history of the NHRA, with you winning your championship and Antron winning in Top Fuel in the same year, this is the first time we've had two champions that are of a diverse nature. Your accomplishments on the track obviously speak for themselves. But being a female racer, do you not like that term? Does it discount? Are you just a racer?

I've always just wanted to be a racer. That's exactly what I am. I'm not just the best female Pro Stock driver, I'm the best Pro Stock driver right now because I have the best team and we won the championship again. The female aspect of it, it's a question I get in every interview that I do. It's just part of the program. It's of interest to the fans, it's of interest to the media. It's awesome because it's a male-dominated sport.

We're able to succeed in it regardless of gender, regardless of race for Antron (Brown). I think it's awesome. It just goes to show what people are capable of. It doesn't matter where you're from, the color of your skin, what gender you are, what religion you are, we're racecar drivers. That's what I've strived to be. I think the more successful we are on the racetrack, the less people are going to look at the girl aspect of it.

Having said that, you play the cards that you're dealt. I think it's awesome and it's interesting. I'm proud to be a part of the female movement with Alexis (DeJoria) and Courtney (Force) and Brittany (Force) and the other ladies out there who are competing and doing wonderful in our sport. It's really neat. It's a double-edged sword. I don't know how to properly answer that question. But I'm proud of it. I'm proud to be a female racer. I'm proud to have the records that we have for females in our sport. My goal is to continue to strive to be the best drag racer in the world. I've got a long ways to go to catch Angelle, but that's my next goal. We'll see how it goes.

Next season is going to be awesome. We're going to have four cars, myself, Jeg Coughlin, Vincent Nobile and Drew Skillman. So I think the talent level of those drivers is just awesome. I think all of us are going to get better because of the opportunity of working with each other. It's no secret that Jeg is probably the best driver that Pro Stock has ever seen. To be able to race alongside of him, bounce things off of him, it's going to be great. We raced a couple races together this year. Since then he raced at Indy was his last race. I talked to him on the phone over the weekend. He helps me in certain areas.

When he came to race for us, I helped him get familiar with the racecar, clutch pedal setup, whatnot. I think we can make each other better. Vincent and Drew, they're both talented drivers. I think next year is going to be wonderful. I'm very optimistic about it. Our goals are definitely high. We want to do better than we did the year before. We were able to do that in 2015. We were able to better ourselves from '14, which looking at our season in 2014, you might think that would be hard to do. Definitely after this season, it's going to be very hard to get better than that. That's our goal, that's what we strive for. I'm excited about the changes and the new teammates. I think the sky's the limit with this group of people.