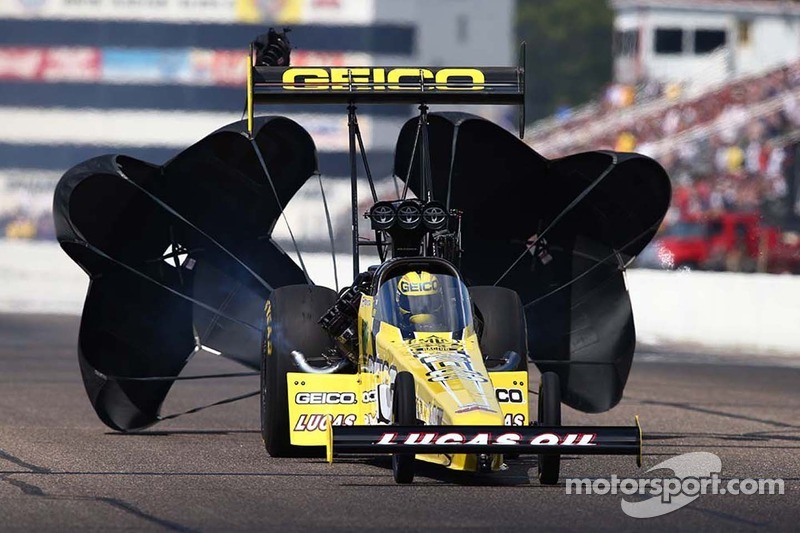 This weekend in Pennsylvania, the countdown continues at the Auto-Plus NHRA Nationals

READING, Pa. – John Force powered to the first three-second run of his standout career and raced to the qualifying lead in Funny Car Friday at the 29th annual Auto-Plus NHRA Nationals at Maple Grove Raceway.

Force, a 15-time world champion, drove his Castrol GTX Ford Mustang to a run of 3.987 seconds at 323.50 mph for the first three-second run in John Force Racing history, also giving him a share of the points lead with Matt Hagan. If it holds, it would be the fourth No. 1 qualifier of the season and 144th in the career for Force, who won last weekend in St. Louis.

On the same qualifying pass, Force’s daughter, Courtney, had her own spectacular pass, running 4.025 at 329.42 in her Traxxas Mustang, giving her the No. 2 qualifying spot and the fastest run in NHRA Funny Car history.

“Dad keeps one-upping me,” Courtney Force said. “My guys are stoked that we ran 329. We’re all going to make copies of the time slip. The run felt unbelievable. When I got out at the top end, they told me my dad ran in the threes. I was like, ‘Well, what did I run?’ When they told me it went 329, I said, ‘I’ll take it!’”

Defending world champion Jack Beckman is currently in third after a run of 4.034 at 318.99 in his Valvoline/MTS Dodge Charger. Hagan is a spot behind after going 4.035 at 319.45 in his Magneti Marelli/Rocky Boots Dodge Charger.

Lucas paced the Top Fuel category with a 3.772 at 314.90 in his GEICO/Lucas Oil dragster. Lucas, who is currently fourth in points, will claim his third No. 1 qualifier of the year and 11th in his career if it holds. He was paired with points leader Shawn Langdon as the final pair of the second qualifying session, and Lucas was able to edge out Langdon’s 3.776 at 325.14 in his Al-Anabi Racing dragster.

“I feel like there’s more left in it, but I’m really proud of the team,” Lucas said. “The team has a lot of confidence right now and it’s starting to show. I feel like every run we make, each one is getting a little better. This track, it’s just phenomenal. It’s so cool to come up here and race. You just feel good when you come up here.”

Following Lucas and Langdon in the third position is seven-time world champion Tony Schumacher, who powered his U.S. Army dragster to a run of 3.778 at 323.97. Lucas’ teammate Brandon Bernstein took the fourth spot after a pass of 3.788 at 324.44 in his Protect The Harvest/MAV-TV dragster kicked off the second session.

In Pro Stock, defending world champion Johnson took command during the second qualifying session, going 6.579 at 210.34 in his Team Mopar Dodge Avenger. Johnson, who was the No. 1 qualifier last weekend in St. Louis, is seeking his fourth No. 1 qualifier of the season and 32nd of his career. He is also hoping for a late-season surge for a possible second straight world championship, as Johnson is currently sixth in the points standings.

“Everybody loaded them up and went for it tonight,” Johnson said. “We know we have to gobble up all those little points, so we’re putting it on kill about every time out. We’re just going to try to make perfect runs every time out now. Hopefully we can continue and just have a good day on Sunday.”

Jason Line took his Summit Racing Equipment Camaro on a run of 6.584 at 210.64 to take the second spot. Points leader Mike Edwards is third in his Interstate Batteries/I Am Second Camaro after going 6.585 at 209.95.

Ray ran a 6.857 at 193.38 on his Sovereign Star-Racing Buell to take initial top spot in Pro Stock Motorcycle, also making a major improvement from his first qualifying session. Should that run maintain the top spot, it would be the third No. 1 qualifier for Ray, who is currently fourth in points.

“The first pass we were a little behind the eight-ball,” Ray said. “We missed some things, but that second run was a stout number. I couldn’t be more excited. This is a very historic event and I really needed those points for the Countdown. I definitely feel good about (Saturday). We need all the help we can get. I’m definitely not out of it, but we need some breaks to go our way. But making a run like we did was really encouraging.”

Hector Arana Jr., who is tied for second in points, is currently second after going 6.886 at 195.19 on his Lucas Oil Buell. Points leader Matt Smith qualified in the fourth position after the first day of qualifying, sending his Viper Motorcycle Company Racing Buell down the track in 6.912 at 193.49.

Championship drama heating up with visit to Maple Grove