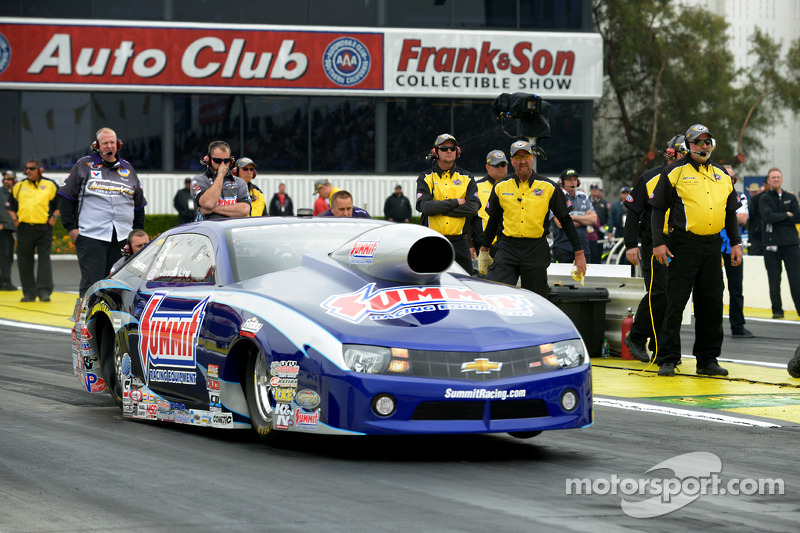 Line hopes to secure a win at the famous zMAX Dragway this weekend in Charlotte.

Mooresville, N.C., April 9, 2014 – Jason Line is a mere 15 points outside of first place in NHRA's Mello Yello Drag Racing Series Pro Stock standings. The two-time series champion in the extremely close and competitive category isn't near satisfied, though. As the driver of the brilliant blue Summit Racing Chevrolet Camaro prepares for the fifth event of 24 on the 2014 schedule, he has a goal – not just for himself, but for the Summit Racing team: to run at the front.

In true KB Racing manner, Line is a relentless competitor and is not easily deterred – and he certainly does not see this weekend's NHRA Four-Wide Nationals, a once yearly spectacle of speed that takes place on a four-lane dragstrip, as any kind of an obstacle. 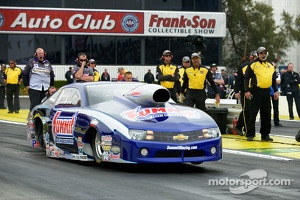 The unusual format and starting line procedures haven't proven difficult for Line in the past. He was a finalist as recently as 2012 and was runner-up in 2010 at the first Four-Wide event held at the facility. Line has regularly been quick and fast at zMAX Dragway. He was the No. 1 qualifier at the four-across spring race held there in 2011 and 2012, and he currently holds the track record for speed at 213.91 mph (also recorded in 2012).

For Line, "running at the front" doesn't necessarily mean moving into the No. 1 spot in the standings, particularly at this early stage of the game. The season is long, and the points lead will likely change hands several times before it's all said and done. But the horsepower-hungry Line wants to be amongst the cars that run the quickest. Always.

"The Summit Racing team is hungry," said Line. "It is certainly more fun to race at the front, and to be honest, that's our job. We need to get back there. Everyone on this team is very motivated. We want to be the best, and there has been a lot of amplified effort towards that.

"This racetrack just seems to suit the Summit Racing team. Four-wide is quite a way to race, and it changes everything, but we tend to run good there. It's a challenge, but it's one we've handled well in the past."

4 - Final round appearances made by Line at zMAX Dragway heading into this weekend, most recently at the fall race in 2012 when he went on to win the event.

5 – total No. 1 qualifying performances by Jason at zMAX Dragway, including two earned at the spring Four-Wide event