Mooresville, N.C., – Jason Line and his Summit Racing team have started the 2011 Full Throttle Drag Racing season in tremendous fashion, winning three of the first six races contested. As a result, they come into this weekend’s NHRA Summer Nationals in Topeka, KS leading the highly competitive Pro Stock division by 50 points over teammate Greg Anderson. Even so, the 2006 champion is approaching this race with a unique blend of realistic optimism.

“As well as our Summit Racing Pontiac has run this year, I certainly believe we could have our best showing ever in Topeka this weekend,” said Line. “I know Heartland Park has not been a good track for us in the past, but as quickly as things change in our world that means little going in to this weekend. I’m not about to say that we’re definitely going to win, but I do feel that we will be better in Topeka than we have been in the last few years, and that all three of our cars should be in contention. Having said that, it will be up to this KB Racing team to make it happen, and I know we can do it.” 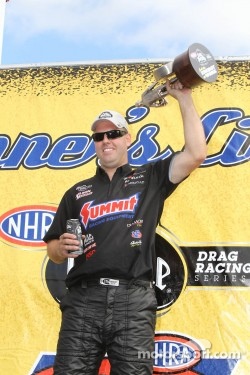 Located on the outskirts of the capital city of Topeka, Heartland Park is a multipurpose motorsports facility that has been hosting NHRA national events since 1989. Although this will be Line’s eighth appearance in the Sunflower State in his “factory hot rod”, his competitive history at HPT dates back to the track’s infancy, when the young Minnesotan raced there in the sportsman ranks. As one of only two tracks on the Full Throttle tour where he has yet to reach the final round, the Minnesota native is more than ready to add it to his ever-growing list of successes.

“I’m not quite sure why we haven’t done better in Topeka,” said Line. “It just seems that the last few years, that particular racing surface was not particularly suited to the way we run our cars. I do feel that we have identified and addressed some of the areas that have given us problems in the past, which leads me to believe our performance will improve this year. Of course, our competitors have also been working on their programs, so we’ll have our work cut out for us.”

Coming off a tremendous weekend in Atlanta that saw both Summit cars advanced to the final round at the sponsor’s race, Line looks to continue his torrid pace in the capital city, giving full credit to his team for their impressive start.

“We’re off to a tremendous start this year, and I attribute that to the people we have working on these Summit Racing Pontiacs,” said Line. “Every member of this KB Racing team is focused and working hard, and even though we’re not where we want to be in terms of performance, we’re gaining on it. We’re heading into Topeka in a much better position than we were a year ago, and hopefully we can use that to maintain this forward momentum.

“I’ve raced at Heartland Park Topeka since the first event held there, when I made it to the semis against Al Corda in my stocker, so I think it’s about time I left there with the Wally. We’ve already shown earlier this year that we’re capable of winning back-to-back races, and there’s no reason we can’t do it again this weekend.”