They had to wait one week to complete the Atlanta event but for the John Force Racing team they left on a positive note.

COMMERCE, GA ---- The NHRA rescheduled the 33rd Summit Racing Equipment NHRA Southern Nationals after rain washed out last weekend’s event after only four pairs of Pro Stock cars made passes last Friday. Contesting the race on Mother’s Day weekend at Atlanta Dragway proved to be a tough task for John Force Racing but John and Brittany Force tightened up their Mello Yello point positions with some early success on Saturday. 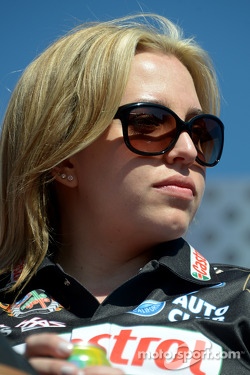 For rookie of the year candidate Brittany Force the loss of half of the qualifying runs was a setback but added to the drama for the Castrol EDGE dragster team. For a few minutes in the final session Force was on the outside looking in but like a racer beyond her years she focused and raced into the show for the sixth time this season. In her two qualifying runs yesterday Force posted a quick enough time to qualify No. 9 and face veteran Clay Millican. Force outran the Parts Plus dragster to earn her second round win of the season, 3.892 to 3.937.

“Getting that win in the first round was exactly what this Castrol EDGE team needed. Coming from Houston where we didn’t qualify and being able to get in the show this weekend was big. We were the No. 9 qualifier after only two qualifying passes so we were happy about that,” said Force.

In the second round she was faced with racing the No. 1 qualifier Shawn Langdon. The pair came up through the Lucas Oil sportsman ranks together racing in Super Comp beginning in 2006. It took a near track record run by Langdon, 3.791 seconds, to trailer Brittany Force and advance to the semi-finals.

“I used to run Shawn Langdon in Super Comp so it was pretty cool to be running against him in Top Fuel now. It was a couple of sportsman racers up in the pros. It really makes it seem like we are a big family out here doing what we love and what we have a passion for. I lost in the second round but that just makes me more ready for Topeka.”

John Force came out of the box with a strong run in the first session of qualifying on Friday. At the end of the lone qualifying day he was also No. 9 qualifier like his daughter in Top Fuel and like her to won in the first round on Sunday.

Force was on the receiving end of a lucky break when rookie driver Chad Head inadvertently rolled the lights triggering a red-light start and handing the win to the 15-time champion. This was the first time Force had ever faced Head in eliminations and he was pleased to see how Head was establishing himself in a tough Funny Car category.

“Chad Head is a good racer. His dad (Jim Head) is a good tuner. That Funny Car has been tough all year. They put up great numbers and we were lucky to get that round win. Sometimes that is what you need,” said Force.

Force’s luck ran out in the second round when he faced No. 1 qualifier and 2011 Funny Car champion Matt Hagan in round two. Force was able to move up in the Mello Yello point standings and he is only three points out of the Top Ten. As Force was staging he took a moment to adjust his position in the Castrol GTX Ford Mustang just as Hagan was rolling his Magnetti Marelli Dodge into the stage beams. When Force realized he was on the clock he jumped in and staged his Ford Mustang, recording he best reaction time of the weekend a strong. 043 seconds. That was not enough to outrun the Summit Racing Equipment NHRA Southern Nationals finalist.

“I nearly screwed myself up against Hagan. I was trying to get up in my seat and when I looked up he was staged. I used almost all of my seven seconds. I wasn’t trying to screw anybody but I almost screwed myself. I race everyone straight up. I talked to Hagan at the top end. I was glad to go some rounds today and we’ll get in that top ten and do some damage,” said Force.

The first round woes continued for Courtney Force’s Traxxas Ford Mustang. The second year driver was upset by veteran Del Worsham in the opening session. Force grabbed bonus points in the first qualifying session as the quickest Funny Car and then made a solid pass on Friday night. In the opening session on Saturday her Traxxas Ford Mustang uncharacteristically smoked the tires as she was pulling away from Worsham.

“It is tough to get back into the groove of racing when you don’t get a full race. Only having two qualifying sessions is tough on everybody. We made two great passes in qualifying and picked up some qualifying bonus points,” said Force.

“We were in the top half of the field. We just struggled getting this Traxxas Ford Mustang down the lane in the first round. I am ready to get to a race where I can get some more seat time. This is still just my second year so that seat time is important. I can learn more about the track when I get more runs in qualifying. I am looking forward to getting four qualifying passes in Topeka and going rounds on Sunday there.”

Robert Hight and the Auto Club Ford Mustang were not able to capture the magic that propelled them to the final round last season at the NHRA Southern Nationals. A dropped cylinder ended his day early against eventual winner Johnny Gray. This was the second race in a row Hight has fallen to Gray in the first round. Prior to these two races Hight had a commanding 9-4 career record against Gray. Unfortunately Hight is 3-5 versus Gray in first rounds now. In all other rounds Hight has a dominating 6-1 record including a 3-0 final round record.

“We dropped a cylinder at the hit and that really did us in. We made a good run in qualifying in the first session on Friday. Glad to get this one behind us and we’ll head to Topeka. We are still trying a few things and we’ll get this Auto Club Mustang sorted out,” said Hight.