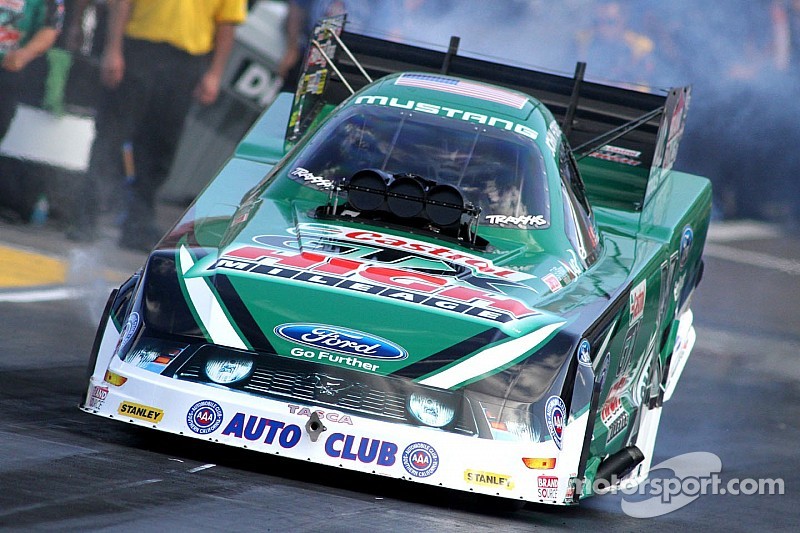 The thunderous sounds of the 8000 horsepower Castrol GTX High Mileage Mustang resonated off the scenic mountains of Morrison, Colorado as John Force once again claimed the No. 1 qualifying spot at the Mopar Mile-High NHRA Nationals.

As the fans packed stands a Bandimere Speedway, they were treated to an awesome spectacle and witnessed history as the 16-time NHRA Mello Yello World Champion smashed both ends of the track record with a 4.049 second run at 318.39 mph.

“I got a great race car and some days I forget about that. And yeah, we have to chase corporate America, it’s what it’s all about or you can’t be here. But, without a good race car, you aren’t going to be here anyway or least on the level to be competitive. It takes money to compete and I’ve got that race car now and I’ve got more energy and more fire,” said John Force.

After blazing the track record and securing the number one spot yesterday, John Force made two more qualifying runs today to see if they could improve on what was already a stellar run from Friday night. As the temperatures increased today, the track conditions were not as favorable and traction became a major issue not just for John, for other drivers as well.

On the first session today, John’s Castrol GTX High Mileage Funny Car was on a great run until is lost traction near the finish line. The fans in the stands got to see the seasoned veteran wrestle his stampeding Mustang away for the centerline and the wall and keep it in the groove. The result was less than stellar 4.216 second run at 277 mph.

“It got lose but we’re playing the heat and seeing what we can get away with. Jimmy (Jimmy Prock, crew chief, Castrol GTX High Mileage Mustang) has his game face on. We did set both ends of the track record last night and the bottom line, we’re going after this Western Swing and see if we can start here in Denver,” said John Force.

John Force: 'We trucked on down Bandimere Speedway today.'

John Force will face Jeff Diehl in the opening round on Sunday but he doesn’t take any opponent lightly. “There’s a whole bunch of other kids that are just as bad as us and they can whip you. Right know though, we got a race car that goes down the track, even when it’s hot. We trucked on down Bandimere Speedway today and even smoking the tires on the first run, we were second quickest for that session,” said John Force.

The last time John Force was in the finals at Mile-High NHRA Nationals was 2011 when he defeated Matt Hagan. The reigning NHRA Mello Yello Funny Car champ has won here seven times and with his recent trip to the winner’s circle two weeks ago in Norwalk, he’s like to keep his winning streak going while adding victory 141 to impressive list of stats.The Auto Club team is on the other side of the ladder from John Force and if race day goes according to the numbers he will get a shot at finally outrunning Force. In qualifying they ran beside each other every run. Force picked up eleven qualifying points and Hight picked up five as the second quickest car in two sessions and third quickest in the last session. The 2009 NHRA Mello Yello Funny Car champion knows he will have his hands full on race day.

“We have a consistent race car but it is a little temperamental. We are working on a couple of things but we will get them all handled. Mike Neff is not the kind of crew chief that is going to do a lot of experimenting or testing. We are going to go out there and run hard and see what we can do. I felt good all weekend and I feel good going into tomorrow. Everyone one of these Funny Cars can go rounds. There are no easy rounds,” said Hight, Mopar Mile High Nationals winner in 2010 and 2005.

Hight will go into eliminations as the No. 2 qualifier. In the ten races that Hight has competed in at Bandimere Speedway he has been the No. 1 or No. 2 qualifier four times. In the first round Hight will race veteran Todd Simpson. The only time these two drivers have crossed paths was the Mopar Mile High Nationals in 2011 with Hight getting the win light.

Courtney Force raced her Traxxas Ford Mustang to qualify No. 7 after four sessions at the Mile-High NHRA Nationals in Denver. She made runs at 4.174 seconds, 4.111 seconds, 6.034 seconds and 4.165seconds to go to the top half of the field with lane choice on race day.

“We’ve had three consistent qualifying runs out here at Bandimere Speedway. Its great being out here, but it puts up a challenge for these crew chiefs. Ron Douglas is doing a great job giving me a great car to drive down that race track. We experimented a little bit in Q3 and it didn’t work out to benefit us. We came out in Q4 and we were looking for a little bit better run, but we were able to get it down there anyway,” said Force.

Currently No. 7 in points, Force will take on Del Worsham in the first round and try to move up in the Funny Car point standings. She is 2-8 against Worsham in previous events, but won the last time the pair met up which was this season at Epping.

“I’ve got a great crew chief that wants to push this car and see it flying down there and I love that about Ron Douglas. It really gets me excited going into the race tomorrow. We’re going up against Worsham again. He’s always a tough racer for me personally, but we’re going to give him all we can and hopefully tomorrow we can have a fast race car and go some rounds here in Denver,” said Force.

Brittany Force and her Castrol EDGE Dragster will race from the ninth qualifying spot. The sophomore Top Fuel driver and 2013 NHRA Auto Club Rookie of the Year will face a familiar rival, Khalid alBalooshi, in the opening round. Brittany Force has raced alBalooshi a total of four times in eliminations and defeated in him earlier this year in Topeka in the second round.

Drag racing in Denver is different

Todd gets his first NHRA win since 2008