CHARLOTTE, NC --- Robert Hight and the Auto Club team continued their streak of Funny Car dominance winning for the fourth time in a row this season with their first win at the Four-Wide NHRA Nationals today. This is just the 7th occasion for a Funny Car driver to win four in a row in NHRA history. Hight defeated Cruz Pedregon on a hole-shot, 4.074 to Pedregon’s 4.070 in the final as both drivers drove away from Ron Capps and John Force. 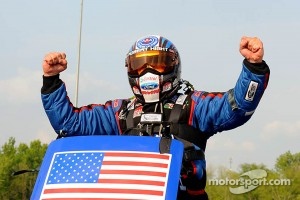 “I saw the win light on the wall but I am not sure that is even all programmed right especially for the final. The other two rounds there are two win lights. I wasn’t getting too excited yet but Eric Lane, our back-up crew chief, he got on the radio and he was all excited. I knew I won by the sound of his voice,” said Hight, the Funny Car points leader. “This class is so tough just getting one win is tough. Racing those three guys in the final, Cruz, Capps, Force, those guys are all Hall of Famers. They are guys I grew up watching. They all have more wins than me. Just to be out there racing those guys and to actually beat them is unbelievable. To win one of these races is tough but to win four in a row is stuff that you don’t even dream about. I don’t see why we need to stop here.”

The last time a driver won four in a row was John Force in 1994 where he went on to win five race consecutively. In two weeks Hight will compete at Royal Purple Raceway Park at the O’Reilly Spring Nationals, site of his first Funny Car win where he will be vying for his fifth win in a row.

Only four other drivers have ever won four in a row Force, Pedregon, Kenny Bernstein and Don Prudhomme. The in-season Funny Car record for consecutive wins is five which Prudhomme earned at the start of the 1976 season and Cruz duplicated in 1992 Force has won five in a for twice in back to back season, 1993 and 1994. The total record for consecutive wins is seven in a row by Prudhomme when he won the last two races of 1975 and then the first five of 1976.

For Hight the win was also the second win in a row from the No. 1 qualifying position. In Las Vegas Hight became the first winner from the top spot at The Strip at Las Vegas Motor Speedway.

“In Funny Car it is kind of the kiss of death to qualify No. 1. You look back at my record as a No. 1 qualifier and it isn’t that great. In Vegas we pulled it off and then to come here and get the No. 1,” said Hight. “You start thinking this is getting a little tough. Jimmy Prock and my team stuck together. That 4.01 (second) blast in the first round got a lot of people’s attention.”

In qualifying Hight only made one full pull to the finish line. His 4.074 second pass on Saturday morning was enough to grab the top spot. In the media center Hight was asked if he was nervous going into eliminations with only one good run under his belt.

“I wasn’t concerned at all. I have a lot of confidence in my team and what we have been doing. We were on the good side of a tune up. That is an easy thing to fix. (Jimmy Prock) saw the clouds this morning and he got excited. He was able to step all over it. We were really close to a three second run there. We ran 320 mph and I don’t know what I ran in the final because we just missed backing that up for a national record. We were like three tenths off.”

Hight just missed setting the NHRA national speed record. His opening round run today of 4.014 seconds at 320.81 mph was a head turning pass. It also out ran his 317.19 mph back-up needed to secure the record.

“In a Funny Car the biggest thing I get is the noise and when it is running right and revving up to 8200 rpms at a thousand feet. That is music to my ears and that is when I know it is going on a good run. It is really flying. We took a lot of wing off my Mustang for first round. When it is running that fast it feels like it doesn’t have a lot of down force and it just is kind of skating at the top end. That is a cool sensation.”

After the first round run Hight advanced to the final on the strength of his second round run at 4.185 seconds. It was not a picture perfect run but it was enough to trip a win light.

“It was really running good in the second round but it welded the clutch. It was running better than the 4.07 yesterday. It just pulled the tires off. That was a hairy run. It really started spinning really hard and with four wide you just keep your foot in it. It is moving all over the place and the engine sounds like it is going to blow up. I got the win light and Jimmy looked at the data and said he could fix it. He said no matter what lane we go in he can fix it and he did. It was flawless and it didn’t spin a bit in the final.”

In the final John Force launched right after Hight and was right with the leaders before his Castrol GTX HIGH MILEAGE Ford Mustang smoked the tires at about half track. He crossed the finish line with a time of 6.814 seconds.

“As a driver, it wasn’t where I wanted to be- I wanted to win, but our car is making a lot of progress getting to the final set of cars here at four-wide. Robert Hight, boy, even when they outrun him by a hair, he still gets them on the Christmas tree,” said Force, the inaugural Four-Wide champion. “I think he might be the best out here on that tree. You know what I’m sayin’? He doesn’t fail. At the end of the day, we got five finals, we got five wins. I got one, Mike Neff will be there next and so will Courtney (Force).”

Mike Neff opened the Funny Car eliminations with a commanding run of 4.084 seconds to be the quickest Funny Car of the second round quad. Unfortunately, in the next round Neff fell to Ron Capps and John Force as his Castrol GTX Ford Mustang blew up at the top end.

“We were happy with our first run today and then our second round- we felt good about our set-up and everything, but it just seemed like when the car left it kind of pulled me over towards the centerline,” said Neff. “I got out of the groove and it spun the tires. It’s a little disappointing to go down that way because we actually did feel pretty good, but I’m excited to see John and Robert in there and hopefully one of them can pull off a four-wide win today for Ford, Castrol, Auto Club, BrandSource, Mac Tools, Freightiner and Traxxas.”

For Neff it was another strong performance but a winner’s circle has continued to elude the driver and tuner.

This marks the fifth race in a row BrandSource has given away a 55” flat screen TV to a lucky fan and JFR has also given away three sets of front loading washers and dryer for being the No. 1 qualifier.

Courtney Force entered her first Four-Wide eliminations this morning holding onto the No. 12 spot. The quartet of Funny Car drivers Force was included in also contained Jack Beckman, Cruz Pedregon and fellow rookie Todd Lesenko. Force qualified 12th and had third lane choice. Ron Douglas, crew chief of the Traxxas Ford Mustang chose the lane one. Lane choice played a huge part in this weekend’s results, but unfortunately the new team is also still getting settled into a competitive routine of their own.

“First round we were out ahead of everyone and a little ways out it dropped a hole and just kinda slowed my car down so it lost a lot of ET and mph because of that. The guys went around me so we lost first round,” Force said.

Despite the rookie’s first round loss, she continues to maintain a positive outlook on her future in the Traxxas Ford Mustang Funny Car.

“I feel good looking at our 60-foot and 330-foot incrementals from today and a couple of the qualifying runs. I feel like we have potential for a good racecar, but we’re just working out the kinks. I have a great team that’s standing by me. I think we’ll get it together and we’ll try it out again in Houston. We’re going to be testing here tomorrow so maybe we can learn something from that and get it fixed,” added Force.