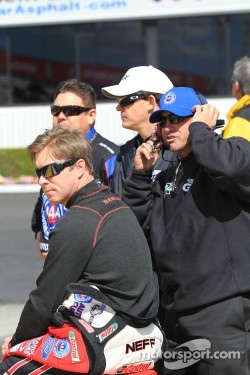 It was the second win in a row for JFR in 2011, Robert Hight won the season opening NHRA Winternationals, and the fourth overall going back to John Force’s championship clinching wins at Las Vegas and Pomona at the end of 2010.

“This is just a great day for our whole team. We needed this to keep the Force string going,” said Neff. “This is four in a row for team Force. It feels good. Fortunately I have a great Mustang. It is the car John drove last year and I just got in it. Now it is just a matter of not messing it up as a driver. That is the hardest part for me.

This was Neff’s first final round and win at the NHRA Gatornationals as either a driver or crew chief. Neff was crew chief for Scotty Cannon and Gary Scelzi. His previous best at the Gatornationals was two appearances in the semi-finals with Scelzi.

Neff is pulling double duty as crew chief and driver but he is not carrying the load by himself. He was quick to spread the credit for the team’s success to his crew and teammates.

“I am mentally drained. Losing an hour of sleep last night didn’t help me either. We have so much help with people looking at the track like (track specialist) Lanny Miglizzi and (crew chief) Bernie Fedderly. I’ve got guys like (crewmen) Danny (Hood) and Jon (Schaffer) in the pits helping me. They help carry the load and they do a lot of the hands on stuff. The hardest part is the mental side. That mental drain just kind of wears you down over the course of the day. It is all worth it now.”

Neff didn’t know he would be back in the driver’s seat until the end of January. For the unflappable Neff the return to the seat was a welcome diversion but also a mentally taxing endeavor. When he was asked if he could slip back into the crew chief role if Force suddenly reversed field Neff was eager to make his driving plans clear.

“I want to give it a run all year now. I love tuning and that is what I will be doing for a long time. This driving deal might just be a one year deal for me. I am trying to make the most of it. When I drove a couple of years ago I was disappointed with my results,” said the seven time NHRA national event finalist driver. “I just felt like we didn’t achieve what I would have wanted to achieve. I made some mistakes driving. For whatever reason I just felt kind of unsatisfied. It is important to me that I want to be a good driver. That is what I am really trying to work on. This win means more to me than the other one by far. This is just a great, great day here.”

With the win Neff moved into sole possession of the Full Throttle points lead. He became the 37th different points leader in funny car class and he is the sixth different JFR driver to lead the funny car points. He joins a list led by John Force, Robert Hight, Ashley Force Hood, Tony Pedregon, and Gary Densham.

For the crew chief turned driver he improved his final round record to 2-5 and he has now won his last two final round appearances. He is 2-5 versus Cruz Pedregon. Ironically, Neff’s first touring job was working on Pedregon’s McDonalds Oldsmobile in 1992 when Pedregon won the funny car championship.

He opened the day with a first round win over friend Jim Head. Neff dispatched fellow Ford driver Bob Tasca III in the second round and he defeated Jack Beckman in the semi-finals before outrunning the two-time world champion Pedregon in the final.

While Neff was extending the JFR win streak his teammates were battling to maintain their positions in the Full Throttle top ten point standings. No. 10 qualifier Robert Hight had the toughest draw in the opening stanza racing against teammate and legend John Force. Hight made his best lap of the weekend, a session quickest 4.079 seconds in route to first round win. Hight dropped his next round race to Jack Beckman when his Auto Club Ford Mustang went up in smoke at half track.

After his first round win over Force Hight told the near capacity crowd,

“That is what we have to do. We have to quit messing up. Our team was behind this run. (Crew chief) Jimmy Prock and (assistant crew chief) Eric Lane were great. Now my team gets to put some of these Mac Tools to work. It is tough when you have to race the boss but now he is going to tell me to go out there and get this win now.”

At the top end after his first round loss Force was philosophical but not concerned by his slow start for the 2011 season.

“I make (Hight) president and now he is sending me home every week. It ain’t no good if we have to race each other in the first or second rounds. We need to stay away from each other and get everyone up in the top half. Jimmy said OK and then he runs a 4.07,” said Force.

“I thought good as long as one of these Fords wins. My son-in-law is my new president. At the end of the day he whipped me in Pomona and I had to fight my way back here. I am just excited because he is still in and Neff is still in. (Co-crew chiefs) Dean Antonelli and Ron Douglas were taught by Austin Coil, the very best.“

When Force looked back on some of his personnel changes from the past two seasons, the winningest driver in NHRA history doesn’t know how to evaluate their success.

“I don’t know if I am lucky or smart. I keep having to make changes amongst the teams and move my drivers and crew chiefs around. Mike Neff proved that he could win when he won Pomona (in 2009). To see him come out here and win is great,” said the 132-time winner.

“He was on his game all day. The car was consistent. He has Danny and Jon working with him and these kids are working hard for him. They are working like Austin and Bernie. The car isn’t missing a lick. Not only is he doing great as a crew chief but also a driver. He was on his game every round. I was really proud. He was under a lot of pressure. He showed he can do it. He is in the game up in the points. I am not worried about Guido and Ron Douglas and my team. We know how to win and we just have to get our deal jiving. I made some good calls. All our sponsors Castrol, Ford, Auto Club, Mac Tools, and BrandSource get the payday.”