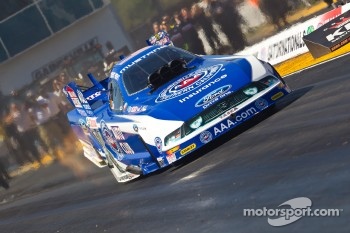 LAS VEGAS --- Robert Hight did something on Sunday that no other Funny Car driver has ever done. He drove his Automobile Club of Southern California Ford Mustang into the winner’s circle of the 12th annual SummitRacing.com NHRA Nationals for the second time in the events history. In the eleven previous installments there were eleven different winners including Hight in 2007. Hight credited his team for putting him into position to get his 20th career win today.

Hight’s Auto Club Ford Mustang recorded elapsed times throughout the day that were unbelievably consistent. In the first round Hight defeated Jim Head with a 4.157 second run. In the second round Hight’s 4.157 second pass was too much for Jack Beckman. In the semis Hight used a reaction time advantage and an ET of 4.155 seconds to trailer Cruz Pedregon. Jimmy Prock stepped up the performance in the finals with a 4.149 second pass.

“My crew guys were paying attention every round to the other nitro teams and we prided ourselves on being the first nitro team to fire our engines every round. We were under the gun this weekend. We were the first nitro car in the staging lanes. Good job to the Auto Club team. To show you how tough Funny Car is this is the 12th year of the SummitRacing.com Nationals and there have been eleven different winners before I repeated today. That shows how tough it is to get one of these wins in a Funny Car. We have to keep it going though.

Hight was thrilled with the win as well as the way he went about getting the 199th Funny Car win for John Force Racing. The win combined with his win at the season opening Winternationals earned him multiple wins for the season. Hight was won at least two races every year of his career. Hight’s 20th career win also ties him with Whit Bazemore for 8th place all-time in the Funny Car category.

“We had Jim Head in the first round and he was right there. That even makes it feel better when you can get a win like this and have it be the third of the year for us at JFR. You can’t forget that John Force finished last year with two wins so that is five in a row. In this day and age with this competition that is awesome,” said Hight. “To show you how tough Funny Car is this is the 12th year of the SummitRacing.com Nationals and there have been eleven different winners before I repeated today. That shows how tough it is to get one of these wins in a Funny Car. We have to keep it going though.”

“We go to the Four Wide race in a couple of weeks. This was the 199th career win for John Force Racing in Funny Car so nothing would be better than getting 200 there in Charlotte. That is another Bruton Smith track and we love their facilities. They are top notch and the best. It is just awesome. NHRA did a great job with the track this weekend to get this live TV deal off.”

In the final Hight pulled up beside Johnny Gray who on paper he had a decisive performance advantage over. Hight and crew chief Jimmy Prock knew these races are not run on paper.

“I don’t know how much confidence there is in our pits because it is not getting any easier. It is just a lot of hard work is really what is paying off for us,” said the three time winner at The Strip at Las Vegas Motor Speedway. “If you let your guard down just one little bit then you are going to get beat. I had close side by side races every round. Johnny Gray stepped up in the final and made his best run of the weekend against us. If you look at it on paper you think back it off a little bit, be safe, go down the track and get the win. We would not be in the pressroom right now if we would have done that.”

we prided ourselves on being the first nitro team to fire our engines every round.

One of the quickest drivers to secure his first 100 round wins, Hight secured his 198th, 199th, 200th and 201st round wins with his victory in the Summit Racing.com Nationals. All his round wins have come at the wheel of the Jimmy Prock-prepared Automobile Club of Southern California Ford Mustang he drives for John Force Racing, Inc. It took John Force 94 starts to win 100 rounds and 136 starts to win 200. Hight won 100 rounds in his first 67 starts. He won his 200th round in his 138th career start.

Hight’s win over two-time Full Throttle world champion Cruz Pedregon in the semi-finals, his 200th round win, was a classic Pedregon Racing versus John Force Racing battle. Hight executed an extraordinary reaction time of .033 to defeat Pedregon’s quicker 4.152 with a 4.155 second run.

“(Getting 200 round wins) shows what kind of equipment I get in and the team I have around me. People always ask me if I feel a lot of pressure because of the team I am on. I say ‘No because it makes it easier for me as a driver because you just go out there and you know that the car is right.’ That makes it easier for the drivers. Hats off to John and the team he has put together.”

Hight consistently gave credit to his crew in the pressroom. The NHRA announced that due to a tight TV schedule with the ESPN2 live broadcast the turnaround time was shorten to 55 minutes from the usually 75 minutes. Hight’s Auto Club crew was at the top of their game today and that performance gave Hight confidence and better equipment.

“I think it just pumps everyone up and gets them going. A lot of this whole sport is about blowing and going. That is why Full Throttle is such a perfect sponsor. You just need to get up. When my team is up I am up and it is a great atmosphere. “

“You always need extra time. That is what is cool. Once we get started then we have some time sit around my guys are not sitting around they are double checking everything. Like (Top Fuel winner) Antron (Brown) said earlier you cannot have these cars too perfect. We have to give ourselves time to double check and fix any little issues. There are a lot of things that can go wrong with one of these cars so giving yourself some extra time it doesn’t hurt.”

When my team is up I am up and it is a great atmosphere.

Hight had to carry the JFR banner for the last half of eliminations after team leader John Force lost in the second round to former JFR teammate Tony Pedregon. Force’s Castrol GTX High Mileage Ford Mustang made a solid 4.259 second run but Pedregon’s 4.314 second pass combined with his .043 second reaction time was too much for the defending event winner.

Force will stay in the Full Throttle top ten point standings in ninth place and is only one round of racing (20 pts) from 6th place.

In the first round Mike Neff’s Castrol GTX Ford Mustang was pulling away from Johnny Gray’s Dodge Charger when his left parachute deployed. As the chute blossomed Neff’s chances of winning two races in a row deflated as Gray passed him at the finish line. Neff’s time of 4.287 second was barely bested by Gray’s 4.254 second run.

“We had some issues this weekend. We hurt a piston yesterday on the second run. We tried to make a few changes and make that better today,” said the 2010 Gatornationals winner. “At 300 feet it put a cylinder out and then right before half track we had a chute fall out. It was a bad run. Unfortunately if that chute wouldn’t have fallen out I still think we would have won the race. I wish I would have had another shot at it. It was kind of like how my gambling luck has gone this weekend.”

As the chutes were billowing behind his Castrol GTX Ford Mustang Neff was not sure what was going on and initially thought his Mustang was spinning the tires as it travelled down The Strip at Las Vegas Motor Speedway.

With the win Hight moved back into the points lead and has 48 point lead over second place Cruz Pedregon.