HIGHT BLASTS TO No. 1 at FOUR-WIDE

CHARLOTTE, NC --- For the second consecutive race and third time this season Robert Hight and his Auto Club Ford Mustang were the quickest Funny Car on the property, posting a time of 4.074 at 317.19 mph to secure the No. 1 qualifying position. Hight edged out provisional No. 1 qualifier now No. 2 qualifier, Ron Capps by two hundredths of a second. Hight was not qualified before he made his pass in the opening session on Saturday. 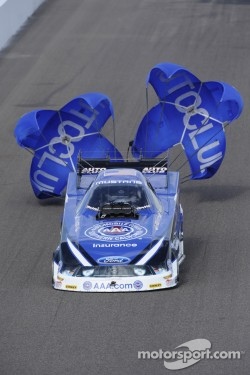 “It was a long night last night. That was not a position we have been in this year. My Auto Club Mustang has been running really well. It was comforting knowing we were on the slow side of it. (Crew chief) Jimmy Prock has no problems trying to make more power and make it go faster. That is easy for him. If we were on the other side where we were fast and trying to slow it down I would really be nervous.

I would have a little more confidence if we would have made more than one good run going into tomorrow. We were a little slow out there in the last session, but Jimmy will fix it for tomorrow. We definitely have to get on the other side of it and make the thing faster. If we can do that I have a really good feeling that this Auto Club Ford Mustang could be low ET every round just like it was in the first run today.”

For Hight, getting to Sunday’s eliminations will be the culmination of three busy days in Charlotte that had the three-time 2012 winner moving from sponsor to sponsor and event to event.

“I am looking forward to it tomorrow. Four-Wide is exciting. We have had a lot of things going since we got to Charlotte. We made a trip over to Lionel to sign some die-casts and we spent a whole day at Freightliner. We just took delivery of four new Cascadia trucks. All our truck drivers are fighting to get one of the new trucks. We got to see how the trucks are built and every ten minutes one of them rolls off the end of the line. We got to see everything start to finish. It was a very, very cool tour.”

Hight is also looking forward to showing off his racing skills to fellow drivers from the NASCAR side of the motorsports globe. The Sprint Cup drivers will be competing at Texas Motor Speedway tonight and many have already expressed interest in flying back to Charlotte and checking out NHRA action at zMax Dragway.

“Looking forward to tomorrow because when we were at the Auto Club 400 a few weeks ago a lot of the NASCAR guys were talking about hopefully getting the race run in Texas finished up so they could all fly in here tomorrow to watch some Four-Wide racing. They will get to see the greatest show on earth which is Four-Wide racing at zMax Dragway.”

With a streak of three wins in a row on the line, Hight did not let the fact that his Auto Club Ford Mustang only made one pass during qualifying. He is not over confident, but his recent success winning the past three races have him comfortable his crew chief and crew will give him a good car.

“If we were coming off a couple races where we were struggling then I would be a lot more nervous about only getting one run. You might think one run wouldn’t be enough. Jimmy Prock does have a great handle on things and he’ll get this thing fixed for tomorrow.”

“One thing that was really cool was when we stayed after to test after Las Vegas, Jimmy decided to stay over until Tuesday because the weather forecast was better. It was a little warmer then and we made a really good run in the heat and that is really not his style. He likes to go out there and give it everything it’s got to see what kind of number he can put down in crusher conditions. I think he played it really smart and I believe doing that and getting that run helped us with that 4.07 you saw earlier today. It was similar conditions.”

“I haven’t looked at the weather for tomorrow. I was so nervous to just get today done and get in the show. I didn’t even look forward until tomorrow until we were in. Whatever it is, it is. We have run well in all kinds of conditions and I really, really believe he has such a good handle on this thing that really when we get on the other side of this thing it is only three rounds which is a lot easier than four rounds. I am looking forward to tomorrow. You get second chances in the first and second rounds.”

Mike Neff also made some dramatic moves today in his Castrol GTX Ford Mustang. The driver and tuner made the quickest run of the final session picking up three qualifying bonus points and grabbing the No. 3 qualifying position.

For one of the busiest tuners on the property the Four-Wide format keeps Neff on his toes during the qualifying and especially eliminations. In eliminations he’ll have first pick of his lane over Blake Alexander, Johnny Gray and Alexis DeJoria.

“The thing with the four-wide now going into eliminations, just like I said all weekend, it’s so fast- paced when you get up there because the pairings are cut in half so you’re not able to watch the number of cars run. Just everything goes so much faster. For me, making my decision, I have a lot less time before I have to go back and get in the car and get ready to go, I don’t have as much time to watch the cars so that kind of makes it a little more difficult. Then from the driver’s point of view, you got a couple more staging bulbs to watch and it takes a little more concentration. It’s just something a little different than you’re used to,” Neff said.

“We got off to a slow start, just couldn’t get it to run like we wanted it to. It was just slow. Today on the last run we made some pretty big moves and the track got hotter and it finally made a run like we were hoping for so we’re definitely excited about that going into tomorrow. All in all, the event’s turning out ok.”

For the team leader and owner, today was a great day for JFR when you consider all four Funny Cars are qualified and none of them will be in the same quartet of Funny Cars in the first round. Force is No. 7 in qualifying and will square off with Capps, who will have first pick of lanes, and Tony Pedregon and Bob Bode.

“Anytime you get them all qualified it’s good. We’re leaving here with Robert’s Auto Club Ford Mustang with low ET and top speed, Neff’s right there in third, I’m 7th and Courtney’s in the show with her Traxxas Ford Mustang,” said Force the winningest driver in NHRA history. “So, that’s the job, to make the show. Now the job is to win it and stay in the top 10. But, it’s a four-lane road and it’s going to be tricky. No. 3 lane is really tricky out there. NHRA is trying to keep it dressed, but it (track rubber) is coming up, so you wanna stay away from that lane and I hope my kid doesn’t get it.”

As a rookie, every race is a learning experience, but this weekend for Rookie of the Year candidate Courtney Force it has been learning at a hyper-speed. Between trying to get used to the unique staging elements to just improving behind the wheel of her Traxxas Ford Mustang, the youngest Force was pleased with her qualifying effort, No. 12 at 4.151 seconds.

“The four-wide has been a little overwhelming, but it’s not been as bad as I thought it was going to be. If you know what lane you’re in, you know what light to look at so I’ve just been trying to focus on myself and not so much on the other guys out there. I’m trying to keep my normal routine,” said Force. “So far, it’s been working out for me. We got qualified at this race; not as well as we would have liked, but we had a malfunction on one of the runs with the wires so that threw us off and lost us a run.

“On that last run our 60-foot was out ahead of everyone, our 330-foot was ahead of everyone, but it spun the tires and that’s where we lost it. I think we learned a lot from that and I think we can use it first round tomorrow. It’s been a great experience. Bruton Smith built an amazing track. It’s a challenge, but it’s definitely one of the most exciting races on the tour.”

In her first Four-Wide Nationals Force will be racing against Cruz Pedregon, Todd Lesenko and Jack Beckman. Her Traxxas team will have the third pick of lanes after Cruz and Beckman select their preferred lanes.