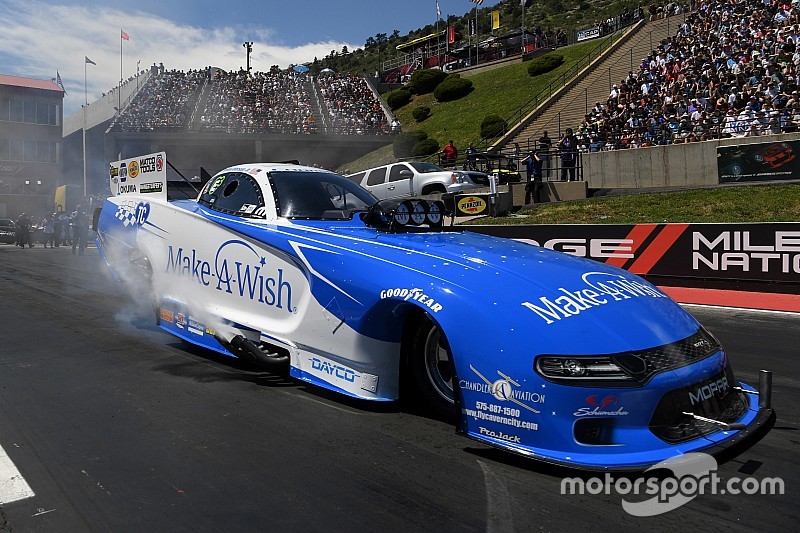 Johnson reached the finals with wins against Jeff Diehl, Jack Beckman and Cruz Pedregon. Tasca, who has reached the final round at three of the past four events, beat Jim Campbell, Ron Capps and No. 1 qualifier and points leader Robert Hight to earn his 15th career finals berth.

Said Johnson: “We made a great run last night – my quickest and fastest ever on the mountain – and it gave the guys confidence. I knew going into today we had a good racecar and my guys did a great job.

“We’re a much better team now and we’ve grown so much as a team, so it’s good to get it done. It wasn’t easy, but we finally got a couple breaks and we finally got it done here. The race has a lot of prestige and it’s so much different than all the rest we run all year. You want to win the unique ones, and this is definitely the most unique of our whole tour.”

Torrence maintained his dominant form in Top Fuel, picking up his eighth win in the past nine races after going 4.044 at 270.21 in the final round in his Capco Contractors dragster to beat Clay Millican’s 4.126 at 267.64. Torrence, the defending champion and points leader, won for the second time in Denver and 35th time in his career.

To get there, Torrence, who qualified No. 1 in Denver and has already clinched his spot in the Mello Yello Countdown to the Championship, beat Richie Crampton and Brittany Force, while Millican edged Doug Kalitta, defending event champ Leah Pritchett and Jordan Vandergriff to advance to his fourth final this season and 19th in his career.

Torrence, who tied Don Garlits on the NHRA’s all-time wins list, declared: “I don’t believe I’ve realized what we’ve been able to accomplish over the last couple of years, and when you’re in these moments you need to relish them and enjoy them because they don’t last forever. We’ve been able to maintain that consistency and the team we’ve assembled, we’ve been able to have these guys together for six years continuously. They’ve made the right calls and decisions, and they’ve given the crew chief the right car time and time again.”

Pro Stock veteran Anderson won for the second straight year in Denver, picking up his first victory of the season and 92nd in his career after going 6.950 at 196.96 in his Summit Racing Equipment Chevrolet Camaro to beat Matt Hartford’s 6.965 at 196.96. It marks Anderson’s first victory since this race a season ago and also fourth career win in Denver, as he picked up round wins against Fernando Cuadra, No. 1 qualifier Richard Freeman and Deric Kramer to reach the finals.

Hartford advanced to his fourth career final round and third this season with victories against Alex Laughlin, Val Smeland and Jeg Coughlin Jr.

“It’s been a year since I’ve been able to win a race, and the class is just tough,” Anderson said. “It says a lot about the class and what it’s about, so I’m proud.

“The racecar was great, just like it was a year ago out here. Obviously, my Summit Chevy loves this racetrack and loves racing at a mile high. It feels wonderful to get the job done and everybody did a great job. They were flawless today.”

Hines picked up his sixth win in eight races this year by going 7.174 at 186.67 in the final round on his Screamin’ Eagle Vance & Hines Harley-Davidson FXDR to beat teammate Eddie Krawiec’s 7.222 at 186.38. Hines, who extended his points lead, put together an impressive result in the debut race of the new FXDR, beating Cory Reed, Hector Arana and defending world champ Matt Smith en route to the win.

Krawiec reached the final round with victories against Karen Stoffer, Jerry Savoie and defending event winner Hector Arana Jr., but there seems to be no stopping Hines in 2019 after he earned his class-best fifth win in Denver and 54th career victory.

“Rolling out this new FXDR, it’s been so much work these last few months,” Hines said. “Bringing that motorcycle here, we didn’t know what quite to expect, but we put them both in the final round.

“You’ve got to have the full preparation and make sure your mind is right coming to these national events. Everybody in the class can step up at any time, and it seems like my bike has been in the right place at the right time in the right round. We just ride the wave when we can.”