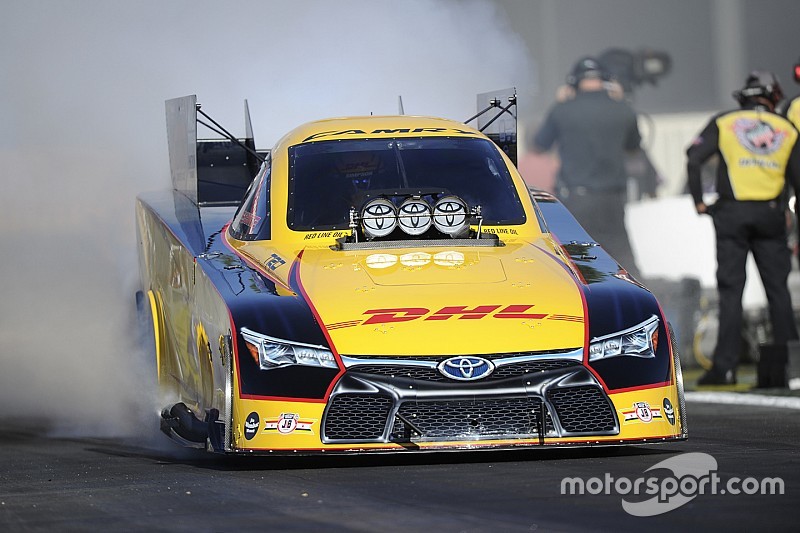 Fresh from claiming two major championships in the 2015 NHRA Mello Yello Drag Racing Series, Toyota Motorsports is increasing its involvement with one of the teams that’s helped them make it to the top.

Toyota Motorsports and Kalitta Motorsports have acknowledged an extension of their partnership in NHRA drag racing. Toyota has worked with the team for several years, giving both technical and marketing expertise to the Ypsilanti, Michigan-based Kalitta team that this year won the heavily contested Funny Car championship with Del Worsham, one of only three NHRA drivers to secure titles in both Top Fuel and Funny Car.

Worsham and teammate Alexis DeJoria both drive Toyota Camry floppers in the series; before returning to the driver’s seat Worsham was DeJoria’s tuner as she entered the Funny Car ranks with Kalitta Motorsports.

Now all four Team Kalitta entries will have Toyota Racing Development (TRD) technical support at their disposal. “After winning the NHRA Funny Car World Championship with Del Worsham and Kalitta Motorsports, we look forward to extending our long-term relationship to also include both of the team’s Top Fuel cars for the 2016 season,” Toyota Motorsports marketing manager Paul Doleshal explained.

The additional technical support could help Jim Oberhofer, crew chief on Doug Kalitta’s car and vice president of operations for all of Kalitta Motorsports, whose stated goal in his job has always been to see Doug Kalitta earn a Top Fuel title. “We are prod to be representing Toyota with all four of our Kalitta Motorsports teams,” he said. “We look forward to working with everyone at TRD, as we have seen the positive difference they’ve made with our Funny Car program, in helping make Del a world champion and Alexis a championship contender.”

Toyota first partnered with Kalitta Motorsports in 2006, when the late Scott Kalitta drove a DHL Toyota Camry Solara as he returned to Funny Car racing. Since the Kalitta/Toyota relationship began 10 seasons ago, the team has delivered 10 victories to the manufacturer, together with this year’s Funny Car title. In 2015 Toyota swept the nitro divisions, as Don Schumacher Racing’s Antron Brown earned the Top Fuel title for the second time with Toyota partnership.

Toyota’s record in Top Fuel has been exceptional; since 2010 the manufacturer has claimed five of six TF titles and last season, Toyota drivers earned wins in 15 of 24 races, together with nearly half of the No. 1 qualifiers in the Top Fuel class.

“We’ve had a relationship with Toyota for several seasons,” said Doug Kalitta, “and I am excited to be able to partner with them for all of our teams going forward. Toyota and the technology they bring to the track is the best, and I’m thrilled to be able to utilize it on our Top Fuel program.”

Todd admitted, “This is something I’ve wanted to happen for a while. I have been able to get to know the TRD staff as they work really closely with our two Toyota Camry Funny Cars. I’m excited to represent Toyota and I think the information that they will provide will help us challenge for the 2016 Top Fuel championship.” Todd finished second in the 2014 title chase.