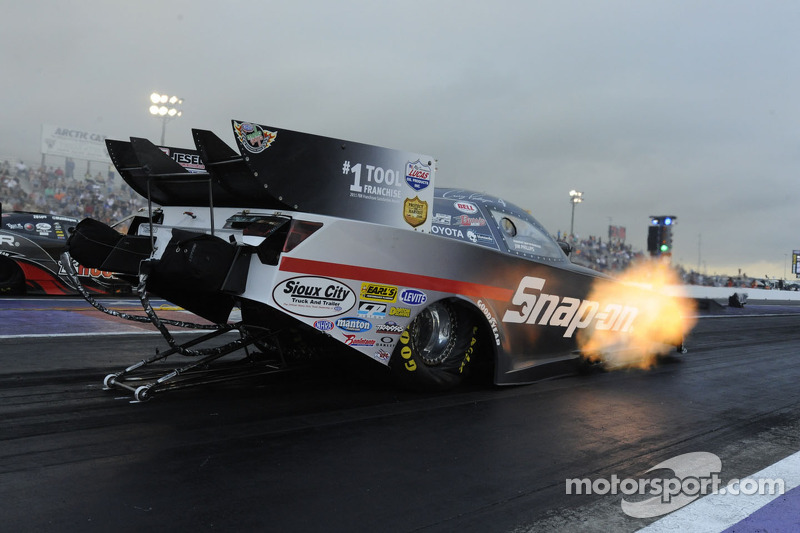 Pedregon made the quickest run in the class and shattered his own track record during Friday’s second qualifying session with a performance of 4.073 seconds at 307.37 mph in his Snap-on Tools Toyota Camry. If the effort holds through Saturday’s two qualifying sessions (1:45 p.m. and 4:45 p.m.), it would be Pedregon’s third No. 1 qualifying position of the season and 53rd of his career. Sunday’s eliminations start at 11 a.m.

After a three straight first-round losses coming into the weekend, Pedregon, who fell to third in points during his recent slump, was pleased with the turnaround on Thunder Mountain on Friday.

"I consider it an honor to come back here and break that [track record from two years ago]. This track is awesome,” said Pedregon, a two-time winner in 2013. “It was still daylight when we ran; I was waiting for it to cool off a bit but conditions were great. I knew someone was going to run quicker than my 4.09 and I'm just glad it was us that did it. I'm actually surprised that more cars didn't run quicker.”

Reigning world champion and Mopar Mile-High NHRA Nationals event winner Jack Beckman was second in his Valvoline/MTS Dodge Charger with a 4.097 at 309.91, setting the Bandimere Speedway track speed record. Tim Wilkerson was third in his Levi Ray & Shoup Ford Mustang with a 4.114 pass at 302.21.

Kalitta powered his Mac Tools dragster to a leading performance of 3.889 at 310.13 during the second of two qualifying sessions on Friday. If his time holds, it would be his sixth No. 1 of the season and 37th of his career. Kalitta, who is seeking his first win of 2013, would also claim the No. 1 spot for the second straight race and third time in the past four events.

“We’re trying hard and love running here at Bandimere,” Kalitta said. “We just hope it holds through tomorrow and we stay No. 1. We gave it all we have and we’re real happy it stuck.”

Khalid alBalooshi was second in his Al-Anabi Racing dragster with a 3.924 second pass at 313.95 and rookie Brittany Force made a big jump to third in her Castrol Edge dragster, posting a 3.926 at 309.56.

In Pro Stock, defending Mello Yello world champion Johnson made a stunning run in the second qualifying session, posting a leading performance of 6.949 at 198.23 in his Team Mopar Dodge Avenger. If it holds, it would be the second No. 1 qualifier this season and 30th of his career. Another No. 1 qualifier in Denver would give Johnson his fourth straight No. 1 qualifier at the track and fifth in his standout career.

“In the first run, we didn’t get all the grip we wanted to but the sun went down and we did better," said Johnson, who has won four times on Thunder Mountain. "We’re very happy the way things are going and we hope we can keep the Mopar out front tomorrow."

In Pro Stock Motorcycle, rookie Adam Arana made the quickest run of the first session of Friday’s qualifying on his ProtectTheHarvest.com/MAVTV Buell with a 7.267 second pass at 182.62. If the run holds through Saturday’s two qualifying sessions, it would give the PSM newcomer his first career No. 1 qualifier.

“We made an awesome hit,” Arana said. “I nailed all the shift points and the bike ran perfectly straight. I actually thought we’d be better in the second session but the bike didn’t shift into sixth gear."

Beckman hopes for another strong run at Mile-High Nationals

Johnson, Torrence, C.Pedregon and A.Arana qualify No. 1 for Mile-High Nationals