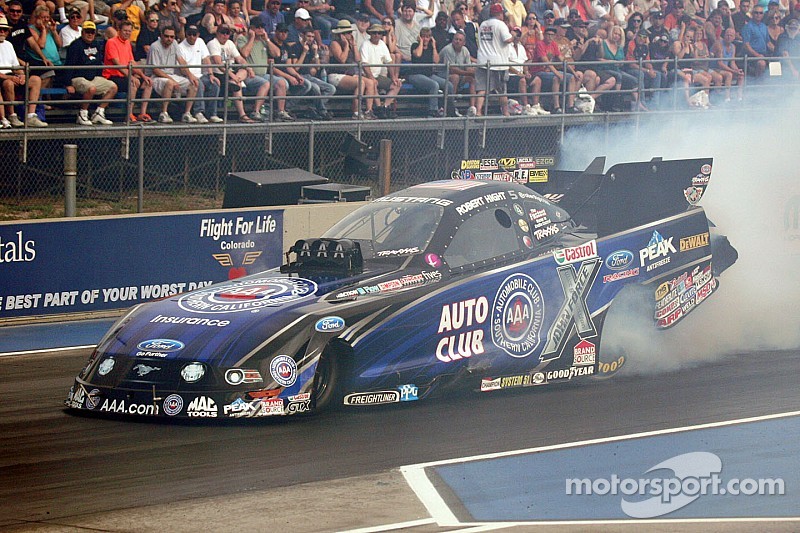 After opening qualifying with a tire-smoking pass that dropped him to 17th position, Hight rebounded on the day’s second attempt and powered to the No. 1 position with a performance of 4.085 seconds at 313.29 mph in his 10,000-horsepower Auto Club Ford Mustang.

Hight was the first car out in the second session and says he was surprised that the elapsed time stayed at the top after the remaining cars made their runs.

“Given we messed up the first run to come out and go 4.08, it was pretty awesome,” Hight said. “It shows that [crew chief Mike] Neff has a great handle on this car and he can make it do what he wants. It was an unbelievable run and exactly what we needed to do.”

Hight is hoping to turn his fortunes around at Brainerd this weekend. The veteran driver has never won or earned a No. 1 qualifying position at the scenic Minnesota dragstrip. He says on the second run he was determined to keep his car in the groove.

“When you are not qualified you aren’t as amped up,” Hight said. “You are making sure you drive the car down the middle of the lane and give your team the best opportunity for a good run. That was my focus to keep it right down the middle and we did that.”

Top Fuel points leader Kalitta earned the top spot with a 3.812 at 322.96 at the controls of his Mac Tools dragster. He is seeking his sixth No. 1 qualifying position of the season and fourth at Brainerd.

“It was cooling off and with the four cars behind us anything could’ve happened,” Kalitta said. “I was real happy with the run. It was nice and straight. On the first run it dropped a cylinder and smoked the tires so it wasn’t really going anywhere. My guys made the right changes and [crew chief] Jim [Oberhofer] is definitely on his game this year tuning this thing. I am real proud of him.”

Kalitta has two career wins in three final round appearances at Brainerd and is hoping to keep some recent momentum going at this event following his second victory of the season two weeks ago in Seattle.

“This is a great event for the Kalitta family,” said Kalitta, who won the Lucas Oil NHRA Nationals in 2005 and 2003. “We’ve had good luck up here over the years. It would be great to get a win on Sunday here.”

In Pro Stock, Johnson was quickest in his Magneti Marelli / Team Mopar Dodge Dart, covering the distance in 6.614 at 208.04.

“The conditions got a little dryer and that helps the Pro Stock cars so we absolutely murdered it in the first 330 feet on that run,” Johnson said. “Hats off to the team. They pulled that one off. I just pulled the levers and the parachute.”

With a successful Western Swing, Johnson moved to second in the points standings and entered this event only 32 markers back of the series leader, Erica Enders-Stevens.

“We’re in Countdown mode right now, trying to get every single point we can,” Johnson said. “The first run tomorrow could be the best conditions of the weekend for our class, so it will be close.”

Enders-Stevens, who sat out the last two races to prepare for the upcoming six-race NHRA Mello Yello Countdown to the Championship playoffs, qualified second with a 6.630 at 207.69 in her Elite Motorsports Chevy Camaro. Local favorite Greg Anderson, a native of Minnesota and three-time winner here, qualified third in his Summit Racing Camaro with a 6.632 at 208.26.

Qualifying continues Saturday with sessions at 1 and 3:30 p.m. to set the fields for Sunday’s 11 a.m. eliminations.