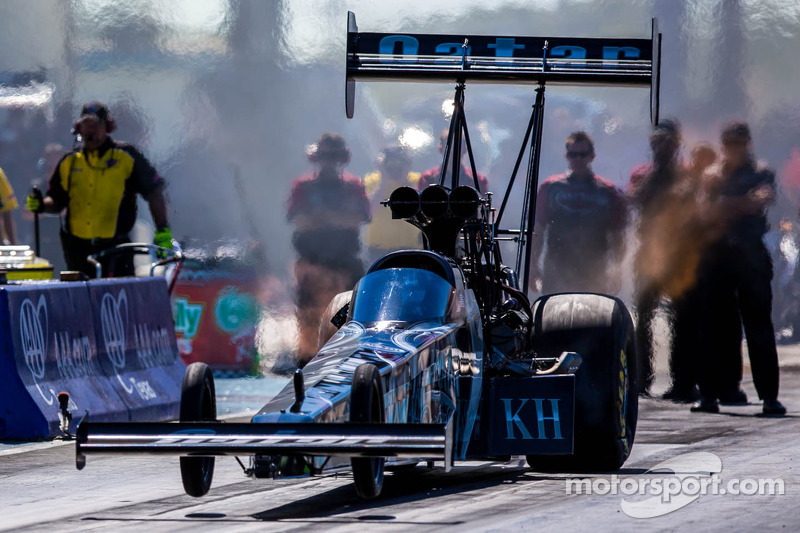 Langdon’s story book season began by winning the prestigious Winternationals in Pomona, just 20 miles from his childhood home in Mira Loma, Calif., and ended with another Pomona victory in the NHRA Finals, capturing the title at the same track he first attended as a toddler. Those wins were just part of a brilliant campaign that saw the Al-Anabi Racing Toyota driver lead the series in victories (seven), number one qualifiers (seven) and win-loss record in elimination rounds (54-17, .760%). In addition to the wins at Pomona, Langdon also was victorious in some of the biggest events on the schedule, including the U.S. Nationals, the Toyota Summernationals and the Traxxas Shootout. The championship was the third in four years for Al-Anabi Racing and the fourth straight for a Toyota Top Fuel driver.

“I'm just so proud of the team and everything that they were able to do coming out of last year where it wasn't quite up to their expectations and we finished fourth,” said Langdon. “They were very determined this year to get that number one on the Al-Anabi car. Just to see the hard work and dedication that went into it. There wasn't a guy that left work early. Everybody stayed late. Everybody put in an A-plus effort throughout the year. So I'm just so proud of the team.

“It's slowly starting to sink in. Every time I look at that trophy, it's just a great feeling. I still just kind of look at myself as that little kid that's racing junior dragsters. I'm just very thankful to be out there and I just enjoy what I do. We're just going to enjoy it for a little while and then we'll get back to the shop to start coming up with a game plan for next year.”

Langdon’s championship was among a number of NHRA highlights for Toyota in 2013 with three Toyota Top Fuel drivers finishing in the top four. Antron Brown, winner of the 2012 Top Fuel title, came back strong to finish as the series runner-up – giving Toyota its first-ever one-two in the championship. Brown won four races during the season and made a late-charge to finish second overall. Morgan Lucas wasn’t far behind, earning a career best fourth-place finish with two victories and three number one qualifiers.

Khalid alBalooshi registered one victory and qualified for his first Countdown to the Championship playoff appearance on the way to placing eighth overall. Brandon Bernstein overcame a back injury that forced him out of the car in mid-season to place 12th.

In Funny, Cruz Pedregon led the way for Toyota with a fourth-place finish after winning four races and having four number one qualifiers. Pedregon has now finished in the top four in each of his last three seasons and in four of the last six, including winning Toyota’s first NHRA Funny Car title in 2008.

Del Worsham also qualified for the Countdown and finished in eighth-place. Alexis DeJoria improved to a 12th-place finish in her sophomore season, while Tony Pedregon and Chad Head would place 14th and 15th. Despite racing just a partial rookie season, Head earned his first number one qualifier and advanced to his first-ever Funny Car final in just his third Funny Car event at Charlotte in April. He also advanced to the finals at Reading late in the season. He’s expected to run a full season in 2014.