Larry Dixon - 2002 NHRA Top Fuel Champion In 1988, Larry Dixon went to work for drag racing legend Don "The Snake" Prudhomme. He cleaned, worked on the car, and cleaned some more, in hopes of one day being able to hop in the driver's seat once ...

In 1988, Larry Dixon went to work for drag racing legend Don "The Snake" Prudhomme. He cleaned, worked on the car, and cleaned some more, in hopes of one day being able to hop in the driver's seat once Prudhomme retired. In 1995, Dixon got the chance, even with most of his experience coming from the pits, and little in the form of driving time. Dixon earned his first NHRA POWERade Top Fuel title in 2002. Prudhomme earned four championships as a Funny Car driver, and this is his first as a team owner. In this championship Q&A session, Dixon talks about what's changed since clinching the title, what it was like to take it away from the retiring Kenny Bernstein and what is on tap for the 2003 campaign. 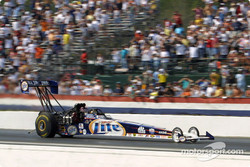 Q: How do you feel about winning your first NHRA POWERade Top Fuel championship?

Dixon: It's an overwhelming feeling and a wonderful sense of accomplishment. Having a lifelong goal and actually being able to achieve it makes you feel great.

Q: You've been working for team owner Don Prudhomme for 15 years. How does it feel to finally bring him a Top Fuel title?

Dixon: I don't feel like I brought it to him. I feel like I was one piece of the puzzle of the team that he assembled. I'm proud to be a part of the championship team and especially with Snakes' team. When I went to work for him in 1988 as a crew member, I thought that I would have a really good shot of being part of one of his championships. I didn't think it would take this long, but it certainly makes me appreciate it that much more. It is not easy to achieve and you certainly can't buy it.

Q: How sweet was it to avenge the 2001 runner-up finish to Kenny Bernstein in the championship chase?

Dixon: I feel fortunate that we were able to go back and battle him. For one, both of our teams were running good, for two, I am very happy he didn't retire after 2001. I really wanted to be able to race him for it. It feels pretty satisfying to be able to beat that team. They are a strong team and they make you work hard for it everyday.

Q: Will you miss going up against Bernstein week after week?

Dixon: When I pull up to the starting line, it is going to be next to a red car with Tim Richards tuning it and a Bernstein driving it. In my world, there isn't anything that is going to change except for the fact that you are going to have a kid in the car who is hungry. He wants to prove to himself and everyone in the world that he deserves the job. It might be a tougher battle next year. It just might be.

Q: Are you ready to be the leader of the category?

Dixon: I feel that we were the leader in 2002 but come the Winternationals, everyone has the same amount of points and we have to go back out there and race everybody for the same goal, which is winning the next championship. The 2002 championship is almost history. It doesn't give us any provisionals, we still have to go out there and earn our keep and earn our spot. As far as me personally being the leader of the category, I don't think I have earned the right to be that person. People like John Force and Snake have been around the sport for a long time, they raced for a long time and have been very successful. They have earned the respect from everyone else. I haven't been around long enough to be in that position. Would I like to? Yes. But I am a long ways from that. I am far from it and I am still working to achieve it.

Q: Will there be any changes to the Miller Lite team next year?

Dixon: One of our guys left at the end of the season for personal reasons and John Collins is coming over from the Blue Skoal Funny Car to replace him. Team wise, I think we are very stable. (Assistant crew chief) Donnie Bender pretty much runs the team and as far as the work on the car. Dick LaHaie hopefully will stick around as long as we make it fun for him and we work hard for him. Car wise, it is always a constant that we are going to try and make the car quicker and more consistent. I think everybody from No. 30 in the points all the way up to the No. 1 in points share those two goals. We aren't any different. LaHaie has a few things that he believes that will help that.

Q: Were you worried at any point of the season that you wouldn't be able to pull off the championship?

Dixon: I think that (the DNQ) at St. Louis proved to everybody something that we already knew. It is very hard to run one of these cars. Did I lose faith in anybody or everybody involved in our team? Not a chance. The same guys that got us a DNQ there are the same people that won us nine races this year. I was confident that we could go to every race and run hard. If you put enough of those races together, then you are going to be able to win a championship. There wasn't anyone jumping overboard at St. Louis, those kinds of things happen. It's more of a big deal in NHRA than in NASCAR because there are no provisionals. Jeff Gordon at Homestead had to use the first provisional of his career. If he didn't have a provisional, he would not have made the show and people would have gone nuts. It's not like that in our sport. Whether you are first or last in the points, you still have to go out there every time and prove yourself to be in the elimination round. To be perfectly honest, I believe that after four sessions of qualifying, if you can't be one of the quickest 16 cars, you don't deserve to be in the show.

Q: Do you think it is more satisfying to win a championship with a family to support you?

Dixon: There was a point in time when the only thing I would have ever cared about was winning races and trying to win the POWERade title. But you get married, you have kids and I still love racing to death but I also love my family to death. They help you out when you have bad days and they are there to share it with you on the good days. Yes, it is much more satisfying having my family around and having them to share it with. It's not a fun party if you are the only one who shows up.

Q: What was the defining moment of the season?

Dixon: There were too many good moments to try and pick the best one out. Winning at Pomona to start the year, winning at Gainesville and winning on Father's Day in Columbus were all great moments. Winning at Las Vegas when we clinched the whole deal. I don't think that any one of those moments is better than the other. They are all great moments. The start we had is a dream deal. You always want to have starts or finishes like that or an entire season like that. You know as a competitor, it is never going to last. It just doesn't happen. I am very aware of that. I just tried to enjoy the moment while it was out there and I think everyone else on our team did too.

Q: Do you feel any different now that you are a champion?

Dixon: I don't get as greasy as I used to get. Do I feel any different? No. I think that doing well out at the race track has afforded me to be able to take care of my family the way I would like to. I used to live three blocks from the beach in California and we sold that house to move to Indianapolis so I could be closer to the car and the team. I enjoy what I am doing. People think I am nuts for moving but I love racing and I want to be where the racing is at. I have been that way since I was a little kid. I am still the guy who likes going to the shop and working on the car and hanging with the guys and taking care of my family. I hope it hasn't changed.