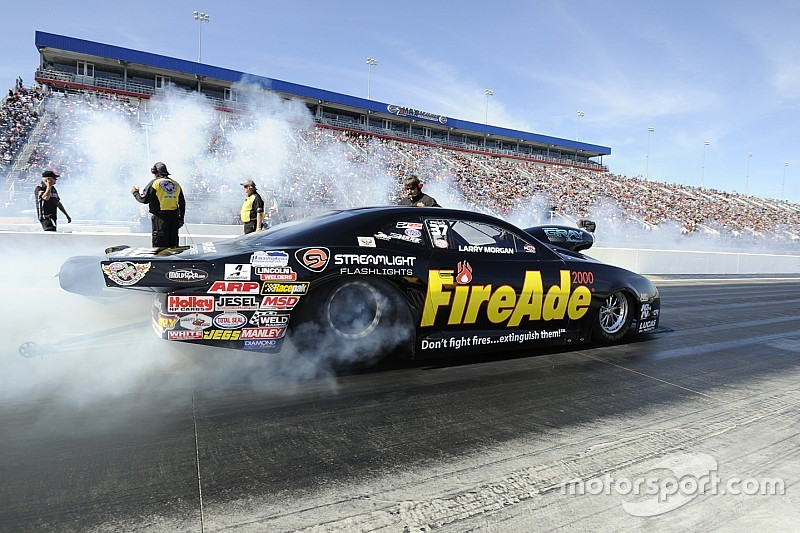 Larry Morgan is set to make his 600th career start this weekend.

He coined a phrase that had application to National Hot Rod Association (NHRA) foibles so many years ago that it’s become populous lexicon: “You can’t fix stupid.” Larry Morgan said this about drag racing’s most popular format as its officials seemed to meander through difficulties of their own making.

Both of them have survived well, with NHRA experiencing another fine, competitive 2015 season of drag racing and Morgan about to make his 600th professional start at Old Bridge Township Raceway Park in Englishtown, New Jersey this weekend.

A change in manufacturer

Morgan, who has always gone it his own way in Pro Stock drag racing, tried a different tack for the 2015 season. After racing a Dodge for many years, then a Ford Mustang when that manufacturer took steps to return to its glory days in Pro Stock, Morgan changed manufacturers for 2015 and is driving a FireAde-sponsored Chevrolet Camaro SS and using Gray Motorsports engines, lessening his personal workload by a ton.

The result is the Ohioan’s first victory since Las Vegas 2009, achieved at the Four Wide Nationals in Charlotte, the sole four-by race on the NHRA calendar and his current sixth place in the points tally as the season stretches through its second quarter. Results to date make Morgan confident as he hits race No. 600, more confident than the veteran has been since shortly after he joined the Pro Stock ranks in 1987 driving an Oldsmobile for California businessman Bob Panella.

Morgan’s first victory came at the most prestigious race on NHRA’s calendar, the 1989 U.S. Nationals, where he beat legendary racer Bob Glidden in the final round. Morgan rightfully is proud of that U.S. Nationals win in just his third year of professional cometition. He was also victorious that particular 1989 weekend in one of NHRA’s race-within-a-race Pro Stock Challenge contests and, by doubling back finally achieved a gift of a Rolex watch he coveted from his team owner, Panella. He still wears it proudly today.

Taking on the top guns

In fact, Morgan has made a career of being a “giant killer”. Even over the past couple of years, where a dearth of development dollars held him back and stopped him from joining the Countdown to the Championship playoffs, Morgan still had a propensity to take out better funded drivers - often No. 1 seeds that he was racing from the No. 16 position - due to his off-the-line capabilities. That hasn’t changed.

And today is the start of an all-important race weekend for Morgan, his sponsor Ron Thomas of FireAde and Gray Motorsports, who build Morgan’s Chervrolet Camaro and prep it alongside Johnny Gray’s pair of family-run cars for sons Shane and Jonathan Gray.

“I’ve been blessed to be hooked up with Ron (Thames) and Johnny Gray,” Morgan enthused. “Johnny’s kids look after me like I’m their dad and I feel good about that. We have a good chance of winning every time we run and it makes you want to get to the racetrack.

“I’ve had a lot of good people I’ve been hooked up with over the years to get to 600 races,” Morgan conned. “I’ve been around so long, there have been a lot of people who have helped me.” To get to 600 races is “quite a feat,” he realizes.

As he becomes only the third driver to reach 600 professional races this weekend, Morgan has no intentions of slowing down. He’s got his sights set on all-time leader John Force (who hits 668 races at Englishtown) and second-place Warren Johnson, who compiled 649 NHRA pro races on his Pro Stock resume.

And no, he still hasn’t found a way to “fix stupid” but he doesn’t plan on quitting racing or talking straight anytime soon. “I know I’m going to last longer than Force does,” Larry Morgan challenged the 16-time Funny Car champion.