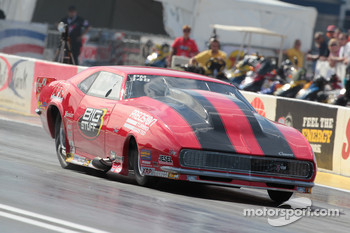 LAS VEGAS – What is the definition of a successful season? That is a question that has mystified many athletes throughout time and in all forms of competition.

That is the question that’s on the mind of driver Brad Personett as the NHRA Get Screened America Pro Mod Drag Racing Series makes its second stop of the 2011 season at The Strip at Las Vegas Motor Speedway for the SummitRacing.com NHRA Nationals, April 1-3.

Do you measure success by wins? Personett had two wins last season, one in Las Vegas and the other at the prestigious Mac Tools U.S. Nationals in Indianapolis. Do you measure it by success in the late stages of the season? Personett’s two wins, along with a runner-up finish in Norwalk and a No. 1 qualifier in Charlotte, N.C., all came within the final four races of the season. Do you measure it in speed? Personett’s ’68 Camaro had the top speed at all but two events in the 10-race season schedule and set the national speed record at 255.39 mph at Lucas Oil Raceway at Indianapolis.

But many drivers, including Personett, feel that the highest measure of success is whether you’re holding that championship trophy at the end of the season. For Personett, a third-place finish in 2010 was just good enough to give him a taste of what he really wanted: An NHRA Get Screened America Pro Mod Drag Racing Series world title.

“We started out rough last year and before we knew it, the season was over,” Personett said. “The teams we run against are so competitive that if anybody gets a leg up, they can walk away with it. Every round counts in this series and you can’t give any away. I feel good about where our car is at this year, but I wish we were a little further than we are. There is no room for error if you want to win the championship.”

With such a highly competitive class this season, Personett knows that there will be many new and old contenders fighting for that world championship at every round of every race this season.

“You could be No. 1 qualifier and go up against the No. 16 car and they could beat you,” he said. “Joe Baker, Mike Knowles, any of those guys are competitive and someone you wouldn’t want to line up against. There is no one in the whole lineup that you can take for granted. You have to be on your A-game every time you go to the starting line.”

You need to come with your guns loaded and be prepared. No more being under prepared. You can’t have any bumps in the road.”

As the NHRA Get Screened America Pro Mod Drag Racing Series makes its first of two stops this season at Las Vegas, Personett expects some close racing and exciting action.

“You may not see the performance you saw at Gainesville, but the weather in Las Vegas, along with the air, can change all the time,” Personett said. “I mean, you’ve got to be ready for any hiccups or crazy weather conditions. We only have 10-races in the season. You need to come with your guns loaded and be prepared. No more being under prepared. You can’t have any bumps in the road.”

Featuring the world’s fastest and most unique doorslammer cars with an extremely diverse collection of vehicles, including ’63 Corvettes, ’68 Camaros, ’67 Mustangs, ’68 Firebirds as well as late model cars, the NHRA Get Screened America Pro Mod Drag Racing Series offers something for every kind of hot-rodding enthusiast.

The SummitRacing.com NHRA Nationals will also be part of the 60th anniversary celebration of NHRA. Legendary Drag Racing team owner Roland Leong will be on hand to sign autographs, meet fans, and participate in the festivities.