Jason Line accepted the challenge and rose to the occasion powering the blue Chevrolet Camaro to the 66th final round of his career and his 32nd Pro Stock victory.

POMONA, Calif., February 9, 2014 – Jason Line had a lot on his mind coming into the 54th annual Circle K NHRA Winternationals, the first race of 24 in NHRA's 2014 Mello Yello Drag Racing Series. With Summit Racing teammate Greg Anderson on the mend but out for the first six races following heart surgery, the Mooresville, N.C., based driver would be racing for the first time without his team leader. Line, however, accepted the challenge and rose to the occasion, powering his bright blue Summit Racing Chevrolet Camaro to the 66th final round of his career and his 32nd Pro Stock victory. Line will leave Auto Club Raceway at Pomona with the points lead. 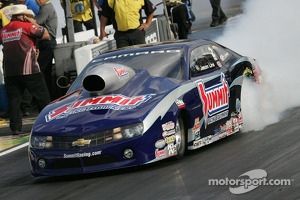 "It’s a huge deal to start off the year like this, and I didn't want to lose to an 'ugly Dodge,' " joked Line. “But in all seriousness, this is a big deal for the Summit Racing team and our Chevrolet Camaros. We worked hard over the winter, and I think we really made some progress. The sport is crazy competitive right now, but we're certainly off to a good start.

"The KB Racing team was great this weekend. We all pitched in and worked together, and Jimmy Alund [who will drive Anderson's Summit Racing Camaro for the first six events] was a great help as well. He’s a very capable guy and was certainly an asset to us this weekend, there’s no question."

Line, tuned by crew chiefs Rob Downing and Tim Freeman, had a strong car from the start with his Summit Racing Camaro – remarkably, the same car that he crashed in testing late last season – and entered eliminations as the No. 3 qualifier based on a best time of 6.514-second at 212.63 mph. Although first-round opponent Matt Hartford was nearly psychic at the starting line with a .004-second reaction time to Line's .051, the charging Chevrolet did its job. Line tripped the finish-line timers with a 6.548 at 211.43 to shut down his opponent's 6.615, 209.30.

The final round with Denver, Colo., resident V. Gaines was familiar for Line, who beat his friendly rival in the 2006 Sonoma final but fell to him in 2008, when Gaines took the title. The two were nearly identical as they launched from the starting line, but Line, with a .003-second edge, made his best run of the day to get the win. Anderson was watching and cheering his team on from a hospital room in N.C.

"I talked to Greg this morning, and he gave me strict instructions," said Line, who joined the KB Racing team, a group that now owns 104 event titles, in 2004. "When I finally get to talk to him tonight, I'm pretty sure he'll be happy with me. This is really cool, and I'm glad Greg is getting better. I'm forever indebted to him for giving me the opportunity so many years ago that nobody else would have."

Capps rebound but another Dodge body takes a hit at Pomona