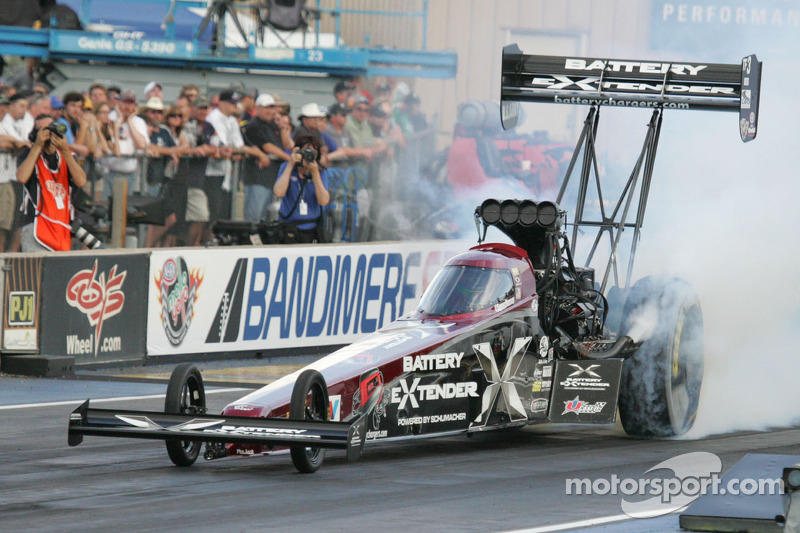 In a thrilling final round, both Johnson and Gaines powered their Mopar Dodge Avengers in a repeat of last year’s final in Denver. Johnson’s performance of 6.989 seconds at 196.87 mph took down the Colorado native’s 7.015 at 196.67 in the final round. It marked the second straight Pro Stock victory for Johnson in Denver, fourth in five years and fifth overall for the Greeneville, Tenn. native who also made his seventh straight final round appearance on Thunder Mountain.

“Winning this weekend was very important to me because it was the 25th anniversary of Mopar’s sponsorship of this race,” said Johnson, who was also the No. 1 qualifier. “It’s been a great marriage between Mopar and the Bandimere family, and I can’t think of a better way to acknowledge and honor that relationship than with a win.”

Johnson outran points leader Mike Edwards in the second round and then Rickie Jones in the semifinals to reach the final round against fellow Dodge Avenger campaigner. Johnson and Jeg Coughlin also clinched spots in the Countdown to the Championship, joining Edwards in the class.

“My crew is the reason that we’ve had all of this success for the last seven races here,” said Johnson. “They are just so determined to win it every year. I have to thank them and the man upstairs.”

In Top Fuel, Massey claimed his third victory of the season and 13th of his career, defeating Houston winner Bob Vandergriff in the final round in his 8,000-horsepower Battery Extender/Schumacher Electric dragster. Massey covered the distance in 3.974 at 309.27 to knock off Vandergriff’s C&J Energy Services dragster, which went 4.029 at 304.67.

Massey, who won for the second time in Denver, remains third in the Mello Yello Top Fuel points standings. Massey outran Clay Millican, Mike Strasburg and points leader Shawn Langdon to advance to the final round. Langdon and Tony Schumacher also became the first two racers in the class to qualify for the Countdown to the Championship.

“I was very surprised to see my DSR teammates Tony Schumacher and Antron Brown not running up to their full potential this weekend,” Massey said. “But again, that just shows you just how tough racing on the mountain is, and I'm sure that both teams will be very tough once we return to sea level at Sonoma. The key to winning here today was to tune smart and drive smart, and that’s exactly what we were able to do.

“We didn’t have the power that we wanted during qualifying, but this isn’t a horsepower race. I was surprised that there wasn’t as much tire smoking in eliminations as was expected. The key to winning here today was to tune smart and drive smart, and that’s exactly what we were able to do.”

This is the third win of the season for Pedregon in four final round appearances. Pedregon, who was also the No. 1 qualifier and set the track E.T. record (4.073), picked up his 33rd career win. It is also his second win at Denver, winning 20 years after his first victory at Bandimere Speedway (1993). He moves to second in the points standings.

“I got asked what the most gratifying part of the weekend was and I’d have to say that it was breaking our own track record and having low E.T. in three of the four rounds,” Pedregon said. “In the first round we ran a 4.17 but we weren’t trying to. I didn’t care if it ran a 4.30; as long as we did not smoke the tires. We were on a three-race first round slide so this couldn’t have come at a better time.”

Pedregon, who re-set his own track speed record at Bandimere in qualifying, beat Todd Simpson, 2009 Denver winner Ron Capps and 2002 Denver champ Del Worsham to advance to the final round. Pedregon, a two-time world champion, moves to second in points with his second win at Denver, winning 20 years after his first victory at Bandimere Speedway (1993).

“This was a good race to come back and run well, and it takes a little pressure off in Sonoma and Seattle,” Pedregon said.

In Pro Stock Motorcycle, Gann’s ended a nine-year winless drought with his first final-round appearance since 2010, earning his fifth career victory. Gann went 7.351 at 181.08 on his Pirana Z Racing Buell to knock off points leader Hector Arana Jr. and his final round time of 7.376 at 182.11 on his Lucas Oil Buell. Gann’s last win also came in Denver in 2004.

“It was a long drought, but if you give up the fight you’re never gonna get out of that drought,” Gann said. “This is a big win. My bike has always been fast but I’ve had problems that have plagued me. I’m the heaviest rider out here and I make my own clutches so I have that to deal with. Being up here on the mountain, with fat people like me, you can only move so much mass so hard but we found a way.”

Gann beat Angie Smith, Steve Johnson and three-time world champion Andrew Hines to reach the final round. He moves to the No. 10 spot in the point standings. Arana Jr. became the first rider in the class to clinch a spot in the Countdown for the Championship.

Johnson, Torrence, C.Pedregon and A.Arana qualify No. 1 for Mile-High Nationals

Antron Brown zeroes in on season turnaround at Sonoma