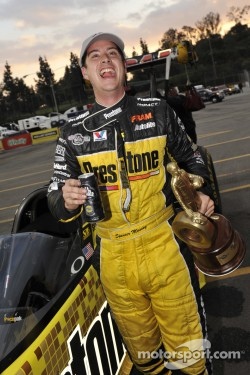 “It’s awesome to come off any race as the winner much less two in a row,” Massey said. “Winning four-wide was great and winning Vegas was fun so obviously we have lots of momentum heading into a track that is kind of close to home. We’ll have lots of friends and family out so it’s going to be a great weekend.”

Not only has the Texas native won two events in a row, he’s won three out of the first five races this season and is the national speed record holder thanks to his 332.18 mph performance during the final round at the circuit’s most recent event in Charlotte, N.C., that held off his hard-charging teammates, Antron Brown and Tony Schumacher.

“We’re not trying to set the world on fire, but somehow we managed to just set the national record and win the race,” Massey said. “It’s awesome to set the speed record. We’re the fastest team out there in NHRA Drag Racing thanks to (crew chiefs) Todd (Okuhara), Phil (Shuler) and my guys and it should stick for quite a while. The number one goal for us is to keep going rounds and winning races. We came so close last year and we want to make sure we get it done this year.”

“Its’ still early in the year and we still have the Countdown to the Championship, so I don’t want to use up all of my luck in the beginning of the season but, there are ups and downs throughout the year and right now we’re on the upside,” Massey said. “We’re not going to win every race, even though we’d love to, it’s just not going to happen. I’m hoping we ride this for a while and then hit another stride toward the end of the season during the Countdown. I know we have everything we need to go one more step this season and win the championship.”

Massey isn’t the only Texas native in Top Fuel ready to race for the Wally trophy at Royal Purple Raceway. Steve Torrence, who earned his first career No. 1 qualifying position two weeks ago in Charlotte, is looking to ride his own wave of momentum into Houston. Torrence is working to earn his first career NHRA Full Throttle Drag Racing Series event win, while seven-time world champ Schumacher is hoping to end his 28-race winless drought and Brown is looking to close the gap on point leader Massey.

John Force Racing driver Robert Hight, who is riding a four-race win streak heading into Houston, has dominated Funny Car competition all season long and leads the championship point standings in the 7,000-horsepower class. His JFR teammate Mike Neff trails in second place while Jack Beckman, Johnny Gray and John Force round out the top five. Rookie Courtney Force is in ninth and defending world champion Matt Hagan is currently outside of the top 10 after a DNQ in Charlotte.