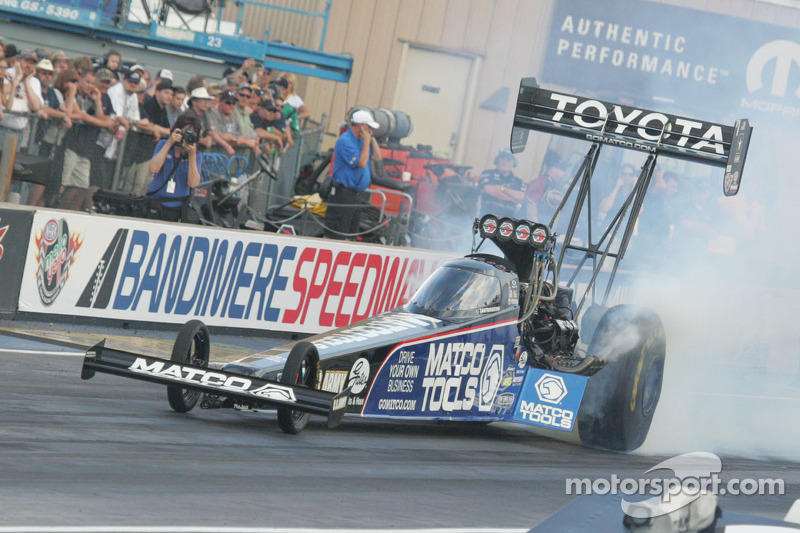 to Atlanta on hot streak but with some short-term memory

Successful drivers and crew chiefs in any form of motorsports share exceptional memories for nuances of tracks, weather conditions and past performances.

Antron Brown and his Matco Tools Top Fuel dragster team led by crew chiefs Brian Corradi and Mark Oswald have impeccable abilities of recall except when it comes to after leaving a track, win or lose.

"One thing I really love about our team is that it doesn't matter what we did before our first qualifying run, it only matters how we end up in qualifying," said Antron, who has won 44 NHRA event titles including 28 in Top Fuel with three of those coming this year for the Mello Yello Drag Racing Series points leader.

"It matters how much we grow with each run. We'll have problems at every race, but we'll grow from it. We get our car into a zone that's ready to race on Sunday."

That plan won't deviate when the Matco Tools team arrives Friday at Atlanta Dragway in Commerce, Ga., for the 34th running of the NHRA Southern Nationals.

They will file in their memory banks that they have won the past two Mello Yello titles and return to the storied track as the reigning event winner. Momentum has been building since winning two of last year's last four events when the 2012 Top Fuel world champions fell one spot short of repeating.

Over the past 10 events, including six this season, the Matco Tools team has advanced to seven championship rounds and won five of them.

"It feels good that we're in stride right now," Antron said. "You go into a race with confidence when your car's running good. The main thing is we know what our team is always capable of. We know we have a really good chance of winning every race if we do our jobs right."

It certainly helps confidence when you arrive at a track that carries special memories.

"It's always been a good race track for me," said Antron, who began competing in Top Fuel in 2008. "I distinctly remember winning there on the U.S. Army bike when I beat Andrew Hines in the final (2006). I remember getting my second Top Fuel Wally (with David Powers Motorsports) when I beat Tony Schumacher on a holeshot (in 2008, a season when his future teammate at Don Schumacher Racing won 15 of the 24 event titles). That was a huge deal because that was the era when no one was beating Tony."

Even without his Atlanta successes - five event titles in six championship rounds - Atlanta would be a special place for Antron on the 24-event Mello Yello pro tour.

"It reminds me of one of the old school race tracks that I grew up at around New Jersey. When you go there it's the history and environment that brings you back to when you were a little kid. The stands are really close to the track and the a lot of old-school drag racers who up. It makes me feel like where it all started for me, and I can just think about going fast and then going faster."