Mike Neff is nothing if not unconventional.

In an age of motor racing specialization, the current Full Throttle points leader, the Funny Car favorite in this week’s 14th annual O’Reilly Route 66 Nationals, is the epitome of versatility as both driver AND crew chief on the Castrol GTX Ford Mustang.

On straight-line tracks like Route 66 Raceway, where fans have come to expect raw, unbridled horsepower, zero-to-315 mile per hour acceleration in four seconds, V-8 engines that pump out 1,000 horsepower per cylinder and over-the-top personalities, Neff is quiet and introspective; prone more to finesse than brute force.

There is definitely more to do when you’re doing both (jobs).

Moreover, in a sport in which only 11 individuals have won pro races from both sides of the cockpit, he is the only one to have done so first as a crew chief – then as a driver. The others – Frank Bradley, Jim Dunn, Dale Emery, Leroy Goldstein, Leonard Hughes, Connie Kalitta, Dick LaHaie, Ed McCulloch, Mark Oswald and Dave Settles – enjoyed their initial success as drivers before later developing their crew chief skills.

Nevertheless, just because Neff does it differently, doesn’t mean his way isn’t the right way.

Winner of three races this year and runner-up in three others, the 44-year-old with the Hollywood good looks has been the Full Throttle points leader for all but three races, a remarkable accomplishment considering his relative lack of experience as a Funny Car driver.

This week’s event will be only his 59th as a pro driver. By way of comparison, boss and teammate John Force is appearing in his 576th race. Ashley Force Hood, in whose stead Neff is racing this season, made 92 appearances in a Funny Car before she decided to step out of the car, at least temporarily, to start a family.

“There is definitely more to do when you’re doing both (jobs),” Neff said of his current situation. “I have such a great team. Jon Schaffer, my right hand man, he pretty much runs the crew. He oversees all the maintenance, day-to-day, and with Dan Hood (Ashley’s husband) and Bernie Fedderly making sure nothing falls through the cracks, everything runs smooth(ly). {{ 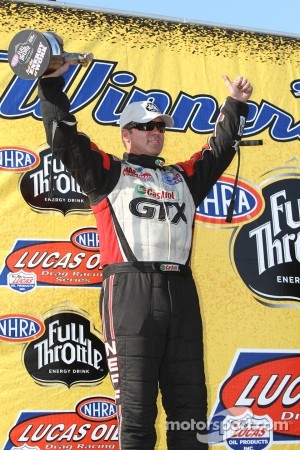 “My team does 99% of the work on the car,” he said. “With all of them involved, it makes it a lot more manageable. I’m getting better at it. I’m getting in better shape, physically, because it’s a long day, especially when it’s hot out there. It wears you down.”

For the competition, it hasn’t been so much a wear down as it has a beat down.

Neff hasn’t started his Castrol GTX Ford from the front of the pack all year, but that’s about all he hasn’t done. In 10 races, he’s qualified no higher than No. 3 and no worse than No. 7, a picture of consistency.

The 2008 winner of the Auto Club’s Road to the Future Award as the NHRA Full Throttle Rookie of the Year, Neff is just the latest in a long line of drivers Force has developed through his “Next Generation” initiative, a program that now has been expanded to include crew chief development.

In fact, Neff is one of seven John Force Racing drivers to have won as many as four events in the primary series and one of four to win the Road to the Future.

It’s an opportunity the native California never thought would come his way. He already had won a world championship as crew chief to driver Gary Scelzi when Force began to ask about his driving ambitions.

At first, Neff thought the 15-time champion was joking, but Force assured him he was not. So, Mike Neff, who had no previous competitive driving experience, made the move to JFR where he was paired with veteran John Medlen. Nevertheless, after following up his Rookie-of-the-Year season by winning the season-ending 2009 Auto Club Finals, lack of sponsorship parked his Ford and Neff went back doing what he does best.

As crew chief to Force, he returned the now 62-year old icon to prominence and dominance with six wins and five runner-up finishes on the way to the 2010 Funny Car championship.

Now, he’s trying to become the first crew chief to win the title with three different drivers: Scelzi, Force and, who would’ve thought, himself.