Neff goes into Las Vegas race day no. 2 with championship on line

Mike Neff has said all season long all he just wants is a chance at the end of the season to win the Full Throttle Funny Car championship. After two days of qualifying at the 12th annual Big O Tires NHRA Nationals in Las Vegas Neff goes into race day as the No. 2 qualifier and with a strong Funny Car that can go rounds. On Saturday his Castrol GTX Ford Mustang was not at the top of its game but for the crew chief and driver there is no concern. 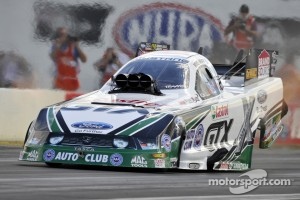 “I would have liked to have gone down the track today. I was on a real good run on that first run. It kind of got out of the groove a little bit and came loose. Tonight it was on another good run and I had some kind of malfunction. That kind of messed things up,” said Neff. “Naturally it is always nice to get down the track on Saturday going into Sunday. I see what the issues were so I feel pretty good about tomorrow. We’ll straighten out a couple of things and we’ll be in good shape.”

“Honestly it is the same for me when it comes to being in the lead or trying to catch someone. Right now none of us can afford to make any mistakes. I can’t afford to make any more some than them,” said Neff. “When you are leading you are feeling the pressure more because you have something to lose. This is just another race and you go out there to do the best you can like you always do. I have been on both sides of that fence.”

As the only person pulling double duty as crew chief and driver in Funny Car championship contention Neff has to look at his championship challenges from two points of view. For Neff the crew chief the battle with Rahn Tobler, Ron Capps’ crew chief, and Todd Smith, Jack Beckman’s tuner, for the points lead is an 8,000 hp chess match. It is a battle that Neff has looked forward to and succeeded at in the past.

“This is what it is all about. This is everything. You work all winter long getting ready for the next season and you get through 21 races at this point. You want to have a chance at the end. That is all I have ever asked for. I want to be in contention and have a chance to win the championship. This is awesome and exciting. I feel good about that,” said Neff, the crew chief for the Castrol GTX Ford Mustang.

On the driving side with only four seasons behind the wheel, Neff is battling two veterans that are also looking for their first Full Throttle Funny Car championships. While he has won the most races over the past two seasons, nine races, including the past two Mac Tools U.S. Nationals, Neff knows that going against Beckman and Capps is a tough challenge.

“Ron Capps is one of the best drivers out there. He has been doing this for a long time and so has Beckman. They are two great drivers. I have to bring my ‘A’ game. That is what makes it so tough doing both. You have to do both jobs right at the same time on the same day. That is the hard part,” added Neff.

Neff will have a tough first round match-up with Countdown competitor Jeff Arend. He has a 9-2 record over the DHL backed veteran and anything can happen on Sunday.

Courtney Force had a successful day wrapping up qualifying. The lead “Rookie of the Year” frontrunner for Auto Club’s Road to the Future award made a great pass straight down the race track at 4.091 to finish the day in the No. 6 spot.

Force is running a hot pink Traxxas Ford Mustang Funny Car body for the month of October to bring awareness to breast cancer.

“Being out here running the hot pink Traxxas Ford Mustang is extra added excitement in Vegas. I really hope we can go rounds tomorrow. It would be really important not only for our team, but also to bring awareness to breast cancer. I’m having a lot of fun running this pink body. Qualifying went great for us today and we have a consistent car,” said Force.

Force tied with Jack Beckman and Matt Hagan in the first session of Saturday qualifying when all three cars ran an identical elapsed time of a 4.091. Force ended up second-quickest of the session and claimed the two bonus points up for grabs based on speed. Force posted a 313.51 mph against a 309.06 (Beckman) and a 307.09 (Hagan).

“Today we picked up two points because we had the higher speed against Hagan and Beckman. I’m happy. We’ve got a consistent race car and I think that is the most important thing you need going into race day,” said Force.

Force had already picked up one bonus point for being the third-quickest of the second session during Friday’s qualifying, giving her three total for the weekend.

The hot pink Traxxas Ford Mustang went up in smoke on the last qualifying pass, but still managed to hold the No. 6 position. Force will take on Jim Head in the opening round on Sunday.

At the start of qualifying today, Robert Hight was not yet in the show, having made two attempts on Friday that left them below the No. 12 qualified position; the cut off for being able to keep your best time going into Saturday. Hight stepped up to the plate with two great runs in his Auto Club Ford Mustang Funny Car and made a solid pass to go to the top at the end of the day.

Hight went right down the track on his first attempt at qualifying today, posting a 4.121 at 311.70 mph. He backed up that run with an impressive 4.074 at 317.27 mph, leaving him in the No. 3 spot by the conclusion of qualifying and earning him two valuable bonus points.

“It’s definitely a step in the right direction for us. We’ve been lucky to make one good qualifying run. We’ve made three here. If the track wouldn’t have been so bad last night I think it would have been four good runs,” said Hight.

The driver and President of John Force Racing will have lance choice over Paul Lee in the opening round on Sunday. He is 1-0 against Lee in their only previous match-up.

”It’s nice to have lane choice for a change. We’ve not been doing well. It’s a step in the right direction and I think it’s something to work on for tomorrow. Late in the day, I hope we’re still in it because there’s a lot left out there (on the track). My guys have worked hard and I’m proud of them,” said Hight.

John Force driving the Destination Force/Castrol GTX HIGH MILEAGE Ford Mustang, based on the comic book written by his daughter Ashley Force Hood had to use his super powers to race into the program on his last attempt at The Strip at Las Vegas Motor Speedway. The 15-time champion had his back to the wall but he and his Dean Antonelli Danny DeGennaro tuned Mustang rose to the occasion posting a 4.108 second pass and grabbing the No. 10 qualifying position. Force will race veteran Jack Beckman in the first round with the chance to help out his teammate Mike Neff in his championship pursuit. Last season Force lost to Jack Beckman in the first round here.

“I am excited about tomorrow. I’m driving this super hero car and in the book I come back and save people today I had to save myself. If I didn’t make it I was going to drive across that freeway out there and put her in the sand,” said Force. “I didn’t want to face the fans and all my sponsors like Castrol, Auto Club, Ford, Traxxas, Mac Tools, BrandSource and especially Ashley if I didn’t make it. I wanted to put this Funny Car in for Ashley. She worked so hard on this design. This car is a bad hombre.”