SEATTLE, Wash. – In 10 trips to Pacific Raceways as either a Funny Car crew chief, driver or both, Mike Neff has enjoyed uncharacteristically little success. He’s won just seven total rounds, only two in three appearances as a driver for John Force Racing, Inc. 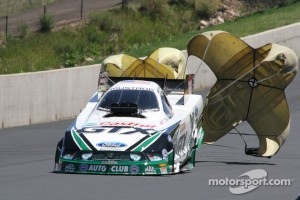 In fact, Seattle is the ONLY track in the NHRA Full Throttle Series on which Neff never has advanced a car to the final round. Driver Gary Scelzi, with whom he won a championship in 2005, raced into the semifinals in 2004. Neff never would have believed that, eight years later, that still would be his best result.

Nevertheless, the current driver AND crew chief on the Castrol GTX® Ford Mustang is determined to change those dynamics this weekend in the 25th renewal of the O’Reilly Northwest Nationals.

If he can do so, the former motocross racer also has an outside chance of joining teammate Robert Hight as a confirmed qualifier for the NHRA’s Countdown to 1 playoffs which begin in September.

A two-time world championship-winning crew chief (he won with John Force in 2010), Neff most recently has excelled in the dual role that this week sends him into the season’s 15th race in fourth place in Full Throttle points.

“Drag racing is all about making adjustments,” said the 45-year old with the Hollywood good looks. “It may be the same track, but the conditions that you have to deal with are never the same. We have a good car and I feel good about our chances this week.”

Neff adopted a little different tactic this year in preparation for the six-race Countdown that pays a whopping $500,000 champion’s bonus.

Last year, he dominated the regular season, going to the final in half the regular season races. He finished 215 points ahead of his nearest rival, a margin that, by rule, was reduced to just 30 points entering the playoffs. Eventually, he finished fifth as Matt Hagan won the title.

“Last year, for whatever reason, we just lost the handle in the playoffs,” Neff said. “It happens. So this year we’ve been kinda racing under the radar. We’ve been trying some things. Some have worked and some haven’t but as long as you’re Top 5 (entering the Countdown), I think you’ve got a good shot.”

The points will be adjusted after the Labor Day Mac Tools U.S. Nationals at Indianapolis, a race in which Neff is the defending champion.

“We’re just trying to improve in areas where we might have been a little weaker last year,” said the eight-time tour winner and 2008 NHRA Rookie-of-the-Year. “Nobody accumulated more points than we did last year, but now, the championship is just based off six races and you have to try and plan so your program is strongest in those last six races.

“The tricky thing about racing,” he said, philosophically, “is sometimes it just doesn’t work the way you want it to. So, you work on your weaknesses and try to get better. The thing is, if it was easy, everybody’d be winning.”