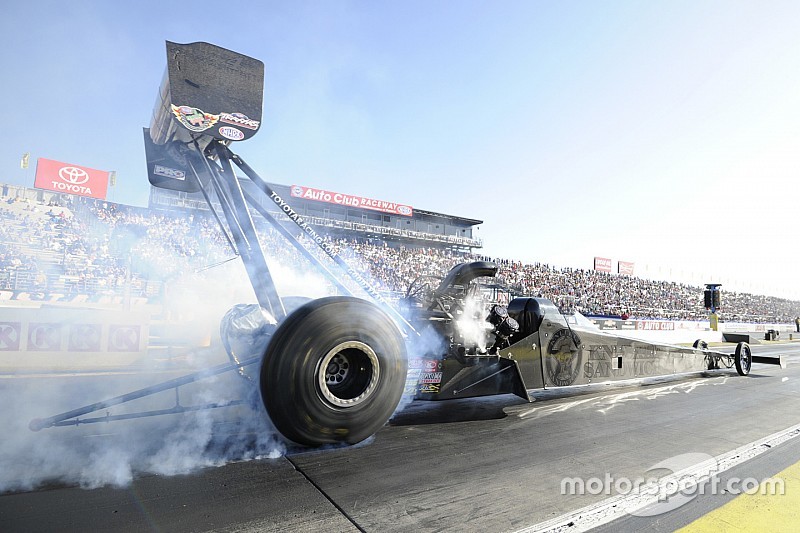 The National Hot Rod Association is attempting to enhance competition for the finale of its 24-race Mello Yello Drag Racing Series season to try and push the championship deciders go to the last day of the finale.

Each NHRA season begins and ends on the Auto Club Raceway at Pomona dragstrip, and it is the culmination of the six-race Countdown to the Championship which starts right after the most prestigious event on the calendar, the Chevrolet Performance U.S. Nationals. This event held on Labor Day Weekend at Lucas Oil Raceway in Indiana, marks the end of the 18-race ‘regular’ season, after which the top 10 in points in NHRA’s four pro categories – Top Fuel, Funny Car, Pro Stock and Pro Stock Motorcycles – become the only drivers eligible for the championships.

However, NHRA has revealed that in the Finals at Pomona, each winner in these four categories will garner 150 points, with the runner-up earning 120. Semifinalists will secure 90 points each, while second round finishers take 60 for making it through the first round. All first-round finishers will claim 30 points each.

These adjustments to points tallies mean that a total of 191 points is available to a single racer at the Auto Club Finals. Each driver or rider who makes at least one qualifying attempt gains 15 points.

The “little” bonus qualifying points have been adjusted too. Whereas at all other races, the top three qualifiers in each session earn three, two and one point each, at Pomona’s final, first earns four points, second earns three, third takes two points while the fourth-place qualifier will gain a single point. That means a single driver or rider can amass as many as 16 qualifying points in the season finale.

Additionally, NHRA is returning to having all 16 elapsed times serving as the qualifying basis in each of its four professional categories. Qualifying at all 24 races will use the quickest 16 elapsed times at the end of each of four qualifying sessions, where it was only the top 12 ETs counted after Friday’s time trials until now. (There are five sessions at the US Nationals).

NHRA is also amending the Countdown to the Championship playoff of six races, beginning at zMax Dragway outside Charlotte. At the close of the regular season, the top 10 drivers/riders in each category 2,100, while positions two through 10 continue to have their points reset in 10-points increments from 2,080 to 2,000 points.

To keep these six Countdown races from becoming a runaway, should a participant eligible for a championship fail to qualify at a Countdown event in which two qualifying sessions were not completed, said driver or rider will be guaranteed a qualifying position in that particular event’s 16-car/motorcycle field.

That particular driver or rider will be inserted into the ladder in the position of the non-championship-eligible participant with the least amount of points entering the event. First-round earnings will remain with the original qualifier, despite not being in that particular race’s eliminations. Round points go to the Countdown participant while qualifying points remain with the bumped qualifier, someone who is ineligible for the Countdown.

“We believe these changes for the 2017 season will increase the level of competition in all the NHRA Mello Yello Drag Racing Series categories,” noted Graham Light, NHRA senior vice president of racing operations. “The points-and-a-half up for grabs at the Auto Club NHRA Finals will bring a heightened level of excitement for the fans and the racers at the conclusion of the thrilling race season.”