Worsham has advanced to at least the semifinals in six of the nine races this season. In those nine races, Worsham has three wins, a runner-up and two semifinal appearances making him 20-6 in eliminations this year. He won races at Gainesville, Fla., Charlotte and Baytown, Texas.

Worsham has never won at Norwalk. One year ago, he was the No. 6 qualifier; he defeated Tony Pedregon and Jack Beckman before losing to Tim Wilkerson in the Funny Car semifinals. 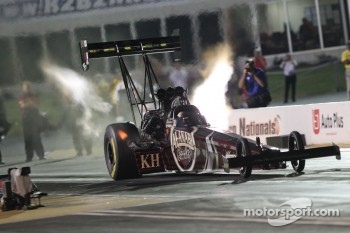 Last weekend at the Thunder Valley Nationals in Bristol, Tenn., Worsham was the No. 6 qualifier; he defeated David Grubnic before losing to Spencer Massey in the second round of eliminations.

When Worsham won his final-round matchup with teammate Larry Dixon in Baytown, Texas May 1, he collected his 400th career round win. He is one of just 17 NHRA Full Throttle Drag Racing Series drivers with at least 400-career round wins.

Worsham is one of only five drivers in NHRA history to lead the point standings in both Top Fuel and Funny Car. The others are Kenny Bernstein, Don Prudhomme, Ed “The Ace” McCulloch and Gary Scelzi.

Worsham joined the Al-Anabi Racing team when it was founded in 2009 after driving for his family-owned Funny Car team since 1990. In 2009 and ’10, Worsham drove the Al-Anabi Racing Toyota Funny Car but joined his teammate in Top Fuel prior to the 2011 season. He competed in 22 races as a Top Fuel driver between 1993 and ’95.

Worsham has 28 wins in his career with three in Top Fuel and 25 in Funny Car; he is one of only 15 drivers in NHRA history to win races in both Top Fuel and Funny Car. Worsham is seventh on the NHRA’s all-time Funny Car wins list. Worsham was the 1991 NHRA Rookie of the Year.

Worsham prior to Norwalk:
“The way this Top Fuel race is shaping up is just what I expected. It shows how competitive Top Fuel racing is. Our Al-Anabi car ran really well in Bristol but not well enough to get it done. A lot of it is timing. I’ve been saying that all season, and it just has to all work out. I’m really excited for Larry and his guys. That’s been a long time coming, and we all knew it was just a matter of time because they’ve been running so well all season. Our car is running well, too, but the timing hasn’t worked out for us in the last few races.

“The level of competition has risen the last three or four races. It’s really at a peak right now. It’s almost like we’re already in the countdown (Countdown to 1 NHRA Playoffs), and I suspect it’ll be like this the rest of the season. It’s nice that we’re into the main part of the season and that we’re racing so often now. We didn’t win last weekend, but we have another chance coming this weekend at Norwalk. So it’s just gonna be this way; I like it.

“I’m still doing it 20 years later because I love the competition. This is what I signed up for, and the Al-Anabi guys have great race cars that are capable of winning any weekend. I’m confident we’ll make the countdown, and have a chance to win a championship. I’ve waited 20 years for this opportunity, and I hope we can get the job done. But for right now, the only thing on our minds is Norwalk, Ohio this weekend.”

2010 NHRA Full Throttle Top Fuel champion Larry Dixon won the Thunder Valley Nationals at Bristol Dragway in Tennessee last weekend. It was his first win of the season, but it was his sixth win when racing on Father’s Day; Dixon’s overall record when racing on Father’s Day is now 27-2. He defeated Rod Fuller, Morgan Lucas, Spencer Massey and Antron Brown on his way to the winner’s circle. 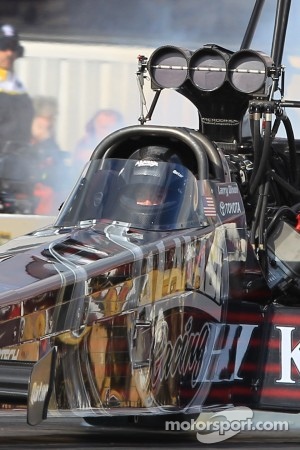 Dixon is the two-time defending champion of the Summit Racing Equipment NHRA Nationals. Last year, he was the No. 1 qualifier; he defeated Troy Buff, Pat Dakin, Tony Schumacher and Antron Brown on his way to the winner’s circle. Dixon set the track record for elapsed time and speed last year. His record elapsed time was 3.780 seconds; his track record speed was 320.43 mph.

Dixon has qualified in the top four at all nine races this season; his average qualifying position is 2.88. He has been the No. 1 qualifier twice this season and 50 times in his career placing him ninth on the NHRA’s all-time No. 1 qualifier list for all classes. He trails eighth-place Don Prudhomme by two No. 1s; John Force and Warren Johnson head the list with 138.

Dixon has advanced to at least the semifinals at five of the nine races this season including the four of the last six races. He has one win in three final-round appearances this season.

Dixon owns the national elapsed-time record. During the first race of the season in Pomona, Calif., Dixon recorded a 3.770-second pass to take the national ET record.

Dixon is one of only four drivers with more than 900 rounds of NHRA national event competition; the others are John Force, Warren Johnson and Kenny Bernstein, who is third with 1,042 rounds. Dixon has 615 round wins in his 916 rounds.

Dixon is one of the only four NHRA Full Throttle Series drivers with 600-career round wins. The others are John Force, Kenny Bernstein and Warren Johnson. Dixon is fourth on the NHRA’s career round-wins list with 615 round wins; Bernstein is third with 681 round wins. Dixon won 62 rounds last season which is his career best and second most ever in Top Fuel; Tony Schumacher won 76 rounds in 2008.

Dixon prior to Norwalk:
“Winning at Bristol doesn’t change how I feel about our Al-Anabi team or car. I’ve always felt great about both, and I guess the only thing that’s different now is that I don’t have to answer the questions about when we’ll win again. We’ve had a great car and a great team all year, and now we just have to go to the next race this weekend and try again.

“I’m certainly looking forward to Norwalk. We’ve won the last two races there, and we have a lot of good data from those races. We’ll just go in there and try our best again. We race 1000 feet at all the racetracks, but what makes certain teams do better at some than others? I really think it has to do with the weather conditions and the time of year we go there. Alan (team manager Alan Johnson) and Jason (crew chief Jason McCulloch) seem to have a setup that works well in warm weather. It’s no different than the setups that Dick LaHaie used in cars I’ve driven in the past. There are tuners that seem to do better in some conditions than others. Dick was known for being able to get a car down the track in not-so-perfect conditions. Alan Johnson and Jason McCulloch have that same knack for success in these types of conditions.

“The conditions seem to have tightened up the Top Fuel pack. There are maybe two or three teams that can run a 3.77 to set a national record. We had some great runs at Norwalk last year and set the track record, but for the next three months, we won’t be at any place that you can set a national record because the conditions will mean best you can run is around a 3.80. So that brings a lot more teams into play; there’s maybe six or seven teams that can run in that range so that brings some really close racing and a lot of cars that are bunched up tight like we have in Top Fuel right now.”