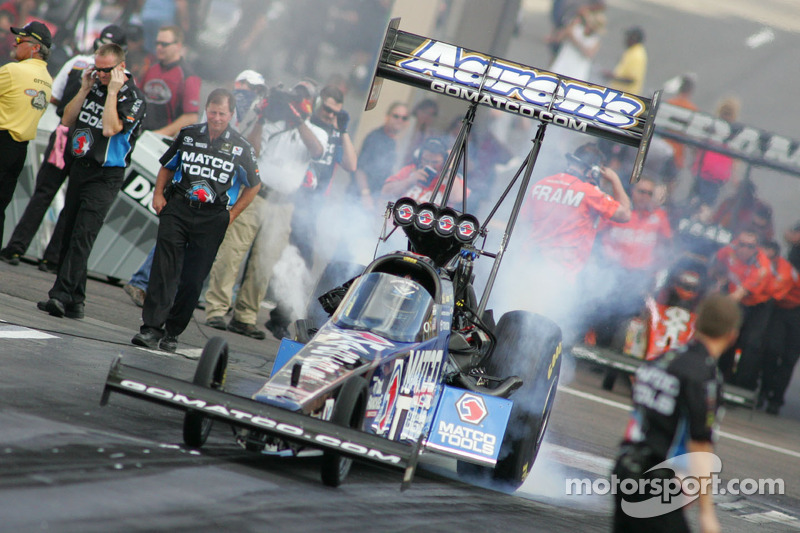 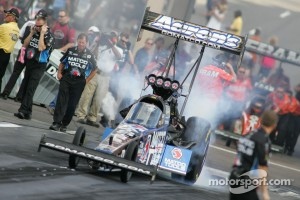 The New Jersey native committed a red-light-starting-line foul against eventual-race winner Del Worsham in the semis and thus was pushed out of first-place in the Top Fuel standings with just one race remaining in the NHRA Full Throttle Countdown to the Championship.

“I feel horrible,” said a visibly dejected Brown. “Given that we ended up smoking the tires, I’m not so sure we would have beaten Del, but you certainly don’t want to give it away at the hit of the throttle.”

After advancing to the finals in Phoenix two weeks ago, Brown seized the points lead from his Don Schumacher Racing teammate, Spencer Massey, as the Full Throttle Drag Racing Series then made its way to Las Vegas.

Brown’s day at The Strip began with an emotional first-round win over his Don Schumacher Racing/U.S. Army Racing teammate, Tony Schumacher. He then disposed of Bob Vandergriff, before losing to Worsham.

“It was tough to have to race Tony in the opening round,” offered Brown. “He’s such a great world champion. But, we had to take care of business right there since he is still in the hunt for the world title.”

With the 2011 season finale forthcoming, November 10-13 at Auto Club Raceway in Pomona, Calif., Brown wants to quickly forget about his Las Vegas experience and focus on clinching his first crown.

He finished the day third in the standings, 14 points – less than a round-win – behind Massey and 12 behind Worsham.

“We definitely have to put this one aside,” he said. “It’s going to come down to the last race of the year which is not that all surprising given how competitive the Top Fuel class has been all year. We’ll just have to re-focus and take it to them in Pomona.”