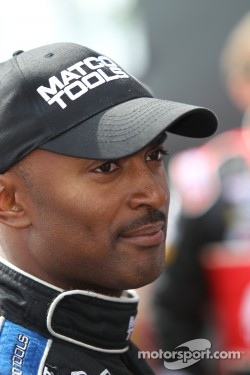 Brown, who arrived in the Lone Star State holding the points lead in the 2011 NHRA Full Throttle Countdown to the Championship, had his three-race winning streak snapped by his Don Schumacher Racing teammate Spencer Massey. With the round win, Massey moved around Brown in the standings.

“It was a tough race with Spencer,” said Brown. “We actually dropped a cylinder on the run. The track was a lot better than we expected.

“But, we’re still in good shape in the Countdown to the Championship. We have a win and a semifinal round finish -- if we do that the rest of the way (four more races), we’ll be just fine.”

After qualifying an uncharacteristic 11th, Brown started final eliminations with a hard-fought win over Doug Kalitta. He then proceeded to dispose of Rod Fuller with a 3.884-second pass at 315.27 miles per hour.

“We were pretty fortunate against Kalitta since we smoked the tires,” said the 35-year-old driver. “But, we came back real strong against Fuller. What was interesting is that Spencer and I had identical elapsed times in that second round. He ended up with lane choice based on a better speed.”

Against Massey, the New Jersey native was able to get off the starting line first, but his dragster quickly began to lose power via the aforementioned dropped cylinder and his teammate marched on by.

“We’ll be leaving Texas with our heads up,” said Brown. “We’ll gear up and get ready for the Auto-Plus Nationals in Reading (Pa.). We’ll just keep doing what we’ve been doing because we’ve been doing really well the last eight races given our four wins and four semifinals. It should be cool at Maple Grove Raceway, so we might see some world records.”