Jamie Allison, director of Ford Racing, accepted the award during the NHRA Full Throttle Series banquet in Hollywood, Calif. on Monday, once the final points were tallied. 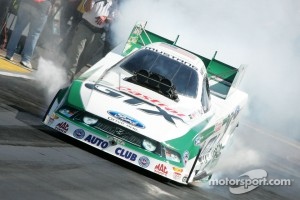 This is Ford’s fourth NHRA Manufacturers Cup award. Besides 1982, the Blue Oval also brought home the title in 1964 and 1965.

“This is a special honor to accept in a special year at Ford,” Allison said. “The Manufacturers Cup is another honor in what has been a truly remarkable year at Ford Racing.”

In 2011, Ford Racing has been celebrating its 110th anniversary. On Oct. 10, 1901, Henry Ford won his first – and only – race, upsetting the most famous racer in the country. Because of that victory, he was able to attract the investors who helped him start Ford Motor Company less than two years later.

Two weeks ago, Ford also clinched its first NASCAR Nationwide Series Manufacturers Championship since 2002 with the Ford Mustang, the model that also drove Ford to the NHRA title.

Points are earned for wins, runner-up finishes and No. 1 qualifiers in Funny Car, Pro Stock, Super Stock and Stock Eliminator.

“Our commitment at Ford to NHRA runs deep and with true dedication,” Allison said. “We are thankful for all teams that wear the Blue Oval with pride, and for those who have helped contribute to this championship.”