Anderson Looking for Redemption with a Strong Finish in Pomona 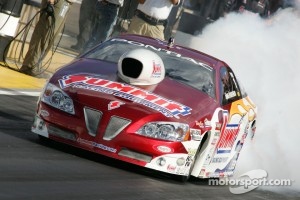 Mooresville, N.C., November 10, 2011 – After nine months and 21 races, the 2011 NHRA Full Throttle Drag Racing season will come to a close this weekend with the running of the Auto Club of Southern California Finals in Pomona, California. As such, this event provides teams and drivers one final opportunity to put the finishing touches on a solid season, or score a redeeming highlight heading into the off-season.

Arriving in the Golden State with five wins in eight final round appearances and two No. 1 qualifying performances, Summit Racing Pro Stock driver Greg Anderson has had another outstanding season, and is assured of another top finish in the championship standings. However, as he is currently locked in a tight battle with several drivers for the second position behind his teammate (and 2011 Pro Stock champion) Jason Line, the four-time champion is ready to maximize every point-scoring opportunity in order to complete a dream season for his team, while providing some redemption for his uncharacteristic showing in this year’s playoffs.

“We have two goals we want to accomplish this weekend in Pomona,” said Anderson. “The first is to somehow find a way to get back around Mike (Edwards) into second place. That would make the Summit Racing team’s season a complete success. With Jason clinching the championship in Las Vegas, we’ve already ensured this will be a great season, but if we can finish 1-2, that would be the total package, the ultimate goal we set for ourselves at the start of every season. If we achieve that, we can feel like we did our jobs, leaving nothing on the table, and giving us a nice shot in the arm heading into the off-season.

“The second objective I have for this weekend is to get back to the winner’s circle. I have been shut out throughout the Countdown, which was the farthest thing from my mind going in to the playoffs, coming in off our big win in Indy. Jason has done a tremendous job, and I’m very happy that he won his second championship – it’s a great thing for Summit and this KB Racing team.

“However, we need to do the things on my car that we were doing before we got into the Countdown, and I need to refocus and do a better job behind the wheel, so we can make amends for our performance over these last few races. It’s right there in front of us – we just have to do a better job of executing, so we can end the year with a great race.”

Fortunately, the straight-line set is heading to a site where Anderson has experienced tremendous success in the past. In 21 previous starts at the Auto Club Raceway at Pomona, he has nine wins in ten final round appearances, which is tied with Warren Johnson for the most by an active Pro Stock driver, as well as eight No. 1 qualifying performances. In addition, having seemingly regained the handle on their race car two weeks ago in Las Vegas, the KB Racing crew comes in to this final test cautiously optimistic about their chances.

“The Auto Club Raceway at Pomona is a very comfortable track for me and I love going there,” said Anderson. “We always seem to perform well there, especially at the end of the year, and I’d like nothing better than to end the defense of my 2010 championship with a win. I have full confidence my KB Racing team is going to give me another great car, and we’ll have a good chance to win the event. Of course, Jason has already stated that he wants to punctuate his championship season the same way, so we know he’s going to be tough, and there are several other cars including Mike (Edwards), AJ (Allen Johnson), Vincent (Nobile) and Erica (Enders) who have all been running well, so we will certainly have our work cut out for us.

“But we are determined to do whatever it takes to show that we should have been in the thick of this championship battle right into this last race. The top spot is gone, so for us No. 2 has become the new No. 1, and we are going to treat it and go after it just as hard as we would the championship. We still have a lot on the line this weekend, so we are going in with guns blazing, trying to find a way to snag that trophy.”

More from
Warren Johnson
IMSA Others