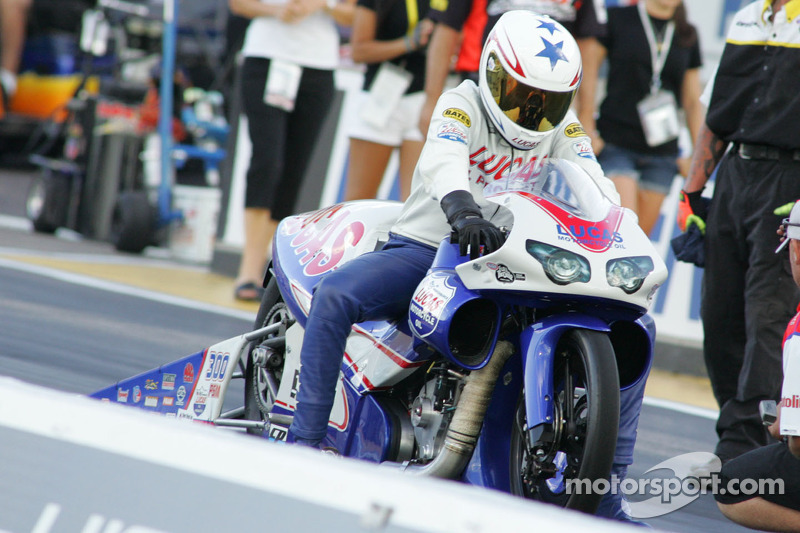 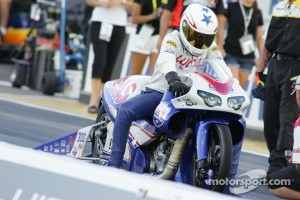 Early in his rookie season, Arana Jr. decided to not worry about anything else and simply have fun. He's been having a lot of fun lately, as his No. 1 qualifier for the Arizona NHRA Nationals earned Saturday at Firebird International Raceway was his sixth of the season and third in a row.

Sunday, Arana Jr. guns for his third victory of the season and second in a row as he takes aim at the Pro Stock Motorcycle championship.

"I'm thinking about the championship, but not that much," Arana Jr. said. "If I think about the championship, it's going to get to my head, and it's going to screw up my riding. I'm just worried about being consistent, hitting my shift points, being a good rider. I know the bike is consistent, so I know if I do my job, we're going to keep going rounds, and we're going to win another race.

Arana Jr. came to Phoenix 35 out of the points lead but knocked five points off his deficit here, thanks to bonus points and the No. 1 qualifier. He was fastest in three of the four qualifying sessions, grabbing the No. 1 spot with a pass of 6.889 seconds at 194.94 mph.

That gives Arana Jr. the track record, as the Pro Stock Motorcycle class ran in Phoenix for the first time. Plus, the bikes aren't slated to return next February.

"We had the horsepower," Arana Jr. said. "It showed in the back half. We just had to have the clutch package together. That's what we did this morning. We got the clutch to hook up and had a .106 60-foot. Everything else came together, and we ran that 6.88.

"I honestly didn't think we were gonna run an .88, but we did, and I'm really proud of that. Even if we were to keep coming to this race track, I think that would be a record that would hold for a while."

"This bike really seems to perform well in the heat," Arana Jr. said. "I don't know why, but it does. It seems like the heat doesn't really affect it, as far as mph. The heat does affect the 60-foot, because the track is greasier. But I think it's an awesome Lucas Oil Buell."

Arana Jr. has reached the finals in four of the last five races, and another good performance on Sunday could go a long way to winning the Auto Club Road to the Future Award given to NHRA's top rookie. He's in a tight battle with Pro Stock driver Vincent Nobile, who happens to be the younger brother of Arana Jr.'s girlfriend, Nicole.

"I wanted to have a good battle with Vincent," Arana Jr. said. "He was running away with it in the beginning, and I was kind of down on myself. But then I was like, 'I'm not even worried about this anymore. I'm just going to go have fun and race.' I was letting it get to me. I threw that out the window, and now I'm starting to do well and have fun."