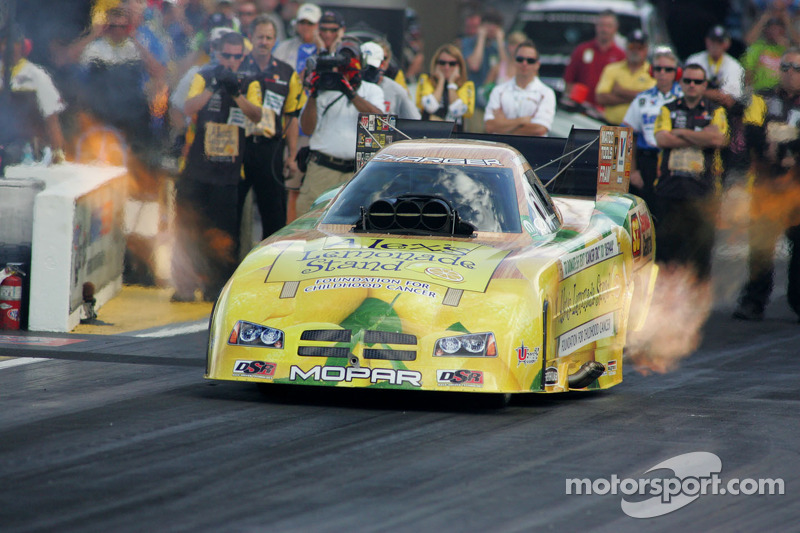 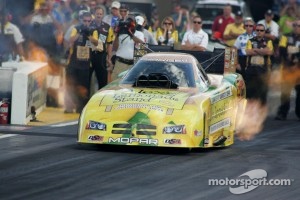 MOHNTON, Pa., September 27, 2011 – Service Central Racing’s Johnny Gray plans to continue his mission to act as “spoiler” from behind the wheel of the “Lemonator” Dodge Charger R/T Funny Car this weekend in the 27th-annual Auto-Plus® NHRA Nationals here at Maple Grove Raceway.

Originally unveiled for the July race in Denver, the Lemonator celebrated the month-long fund-raising efforts by TBC Retail Group’s affiliated outlets (Tire Kingdom, NTB-National Tire and Battery, Merchant’s Tire and Auto Center and Big O Tires) to raise money in the race to find a cure for childhood cancer.

“We’re bringing the Lemonator back because the work Alex’s Lemonade Stand Foundation (http://www.alexslemonade.org/), which is located in Pennsylvania, deserves and will receive our continued support,” explained Gray. “In addition, September is National Childhood Cancer Awareness Month (http://tinyurl.com/44rt3bt), so any further means of getting the word out is a great thing.

“We will have several children and their families at the race this weekend and we hope we can put on a good show for them, maybe even put the Lemonator in the winner’s circle.”

While the Don Schumacher Racing driver has dedicated himself to help in the cause to eradicate childhood cancer, he has also dedicated himself and the Service Central Funny Car to spoiling the chances of the drivers in the 2011 NHRA Countdown to the Championship.

“A lot of the teams in the Countdown earlier in the season took advantage of us while we struggled to establish ourselves,” explained the 58-year-old Don Schumacher Racing driver who qualified second for last week’s race outside Dallas. “Now that we’ve turned things around under the stewardship of Rob Wendland and Dickie Venables (co-crew chiefs), we plan to make those folks pay. We might not be in the playoffs, but we’re going to race everyone as if it was our bid for the championship!”