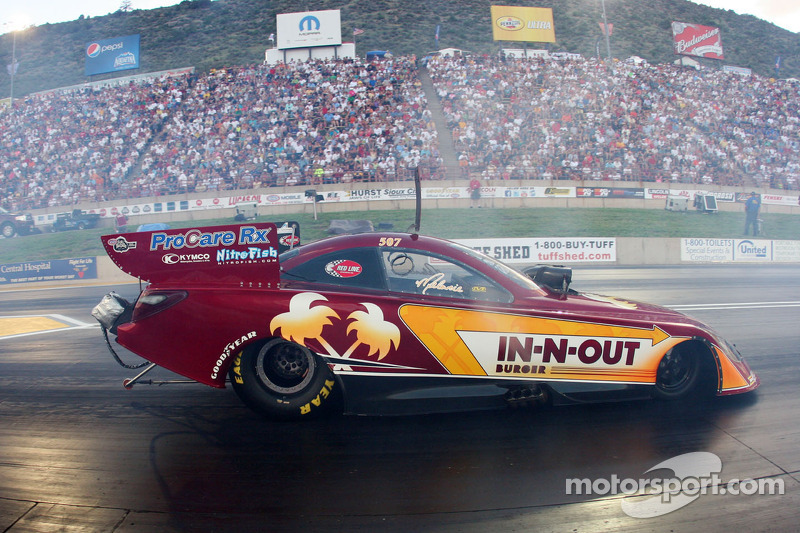 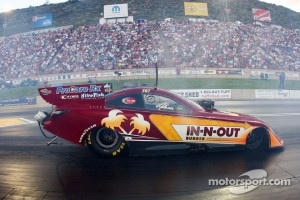 PHOENIX (Oct. 15) – Despite encountering a varied array of mechanical issues during qualifying, Melanie Troxel successfully put the In-N-Out Burger Toyota Funny Car into the field at the NHRA Arizona Nationals on Saturday at Firebird International Raceway.

Shredded blower belts and dropped cylinders seemingly greeted Troxel's team at every turn, but the In-N-Out car will start 14th for Sunday's eliminations after a best pass of 4.364 seconds at 273.94 mph.

"While today wasn't perfect, it was a considerably better day than the one we had on Friday," Troxel said. "Even though we are still having some problems with dropped holes, the belt stayed on, which helped us take care of objective No. 1, get into the field.

"In that Q4 pass it kicked the rods out 150 feet before the finish line, so it didn't run as well as the guys had tuned it to run. But it got us off the bump spot which was important."

On Saturday, track temperatures soared to close to 130 degrees. Conditions aren’t supposed to be much different for Sunday's eliminations, but Troxel said days where anything can happen are ones that stoke her competitive spirit.

"This is one of the trickiest situations we've been in all year," Troxel said. "This is a track that basically we've never ran on. They've made changed to the track surface and we've never run here in this kind of heat. It's difficult for everybody and does level the playing field.

"We're ready for the challenge. I know the guys are pouring over the data and trying to figure out what it is going to take get down the track tomorrow. We're going to be ready for the fight."