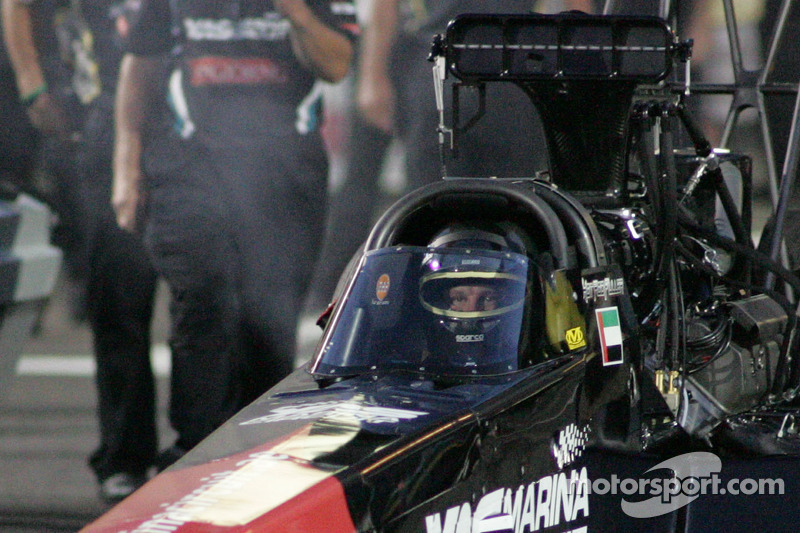 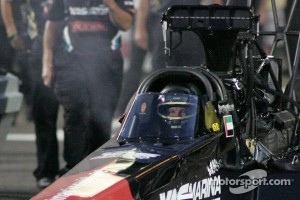 CHANDLER, Ariz. (Oct. 19, 2011) – For Hot Rod Fuller, driver of the Yas Marina Circuit Top Fuel Dragster, the 27th annual NHRA Arizona Nationals at Phoenix Firebird Raceway was an important race. Being Fuller’s second-to-last event for 2011 and taking into account his past achievements at this specific track, the team was really looking for a win this weekend.

With scorching track temperatures in the books, Fuller began the event on Friday with a pass that resulted in early tire smoke, leaving him in the no. 16 spot by the end of the first qualifying session. Luckily, Fuller bolted down the track on his next qualifying shot, posting a 4.007 ET (elapsed time) at over 300 mph, sending him on up into the no. 2 spot.

The Yas Marina Circuit Top Fuel Dragster hazed the tires for both of their qualifying shots on Saturday, causing them to slip to the no. 7 position. Fuller would take on the no. 10 qualifier, Shawn Langdon, on Sunday.

Fuller took the starting line advantage for the first round of eliminations on Sunday, but suffered an unfortunate loss to Langdon when the Yas Marina Circuit Top Fuel Dragster began to drop cylinders just before the finish line. Fuller is 3 - 0 against Langdon in prior events.

“We qualified well and were in the top half of the field. We were really confident going into race day, but these conditions are way different than anything we have ran in all year and just really difficult to figure out. Track temperatures were over 130 degrees and we were a little nervous about that. We were up against a tough car first round, Shaw Langdon, and you know, he made it down the track three times and always is great off the line so for us to be qualifying 7th, it was a hard draw. We knew we would have to be on our game to run well against him,” said Fuller.

“I left on him (had the better reaction time) which is really hard to do against him (Langdon), and was way ahead of him at half-track when the engine broke apart and blew up right before the finish line. He passed me right at the end and beat me by 11 thousandths of a second which is less than two feet, so it was a great race.”

Fuller raced at Phoenix Firebird Raceway as a sportsman racer earlier in his career. From 2004 to 2007, Fuller drove his car into the winner’s circle three times. He won seven rounds of competition to claim the Super Gas title during the NHRA national event at Phoenix in 2004. He then skipped the 2005 event, but returned in 2006 and 2007 with back to back victories in Top Fuel Dragster.

“Our guys have nothing to hang their heads about. We all say we have done well and have been racing well but in drag racing sometimes you do need that little bit of luck to get you through it all and we haven’t had any of that yet. It’s just one of those things that will come around when it does and we’re going to need to capitalize on it when it does, but until then we’re all smiling and looking forward to Las Vegas,” Fuller said.