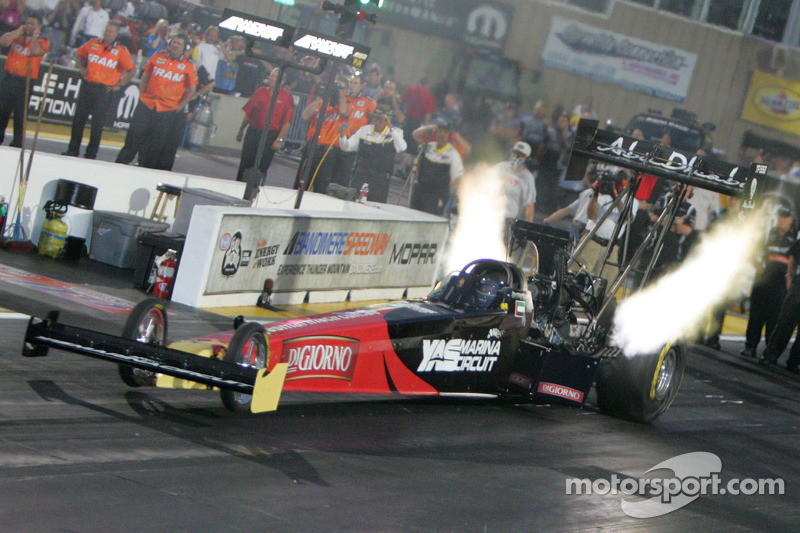 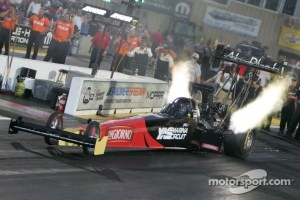 MOHNTON, Pa. (Oct. 2, 2011) – It was a cold and rainy weekend at Maple Grove Raceway in Reading, Pa. for the Auto-Plus NHRA Nationals, Sept. 29-Oct. 2. With track temperatures dropping as low as 60 degrees, most teams didn’t have the necessary data in order for their crew chiefs to make completely confident decisions on the race cars.

Surprisingly, the weekend weather did not affect the completion of four full qualifying sessions. Hot Rod Fuller, driver of the Yas Marina Circuit Top Fuel Dragster, launched hard in his first pass with a 3.854 ET (elapsed time) at 319.14 mph. Fuller smoked the tires early during his next pass and was forced to shut the car off early. By the end of the day Friday, Fuller was set in the no. 10 spot.

Saturday brought even colder weather, but still a couple of great looking passes for Fuller and the Yas Marina Circuit Top Fuel Dragster. Fuller’s third qualifying run marked his career-quickest with a 3.801 ET at 323.19 mph while sending him to the no. 4 spot. The team followed up that pass with an impressive 3.785 ET at 325.53 mph for the final session. This was Fuller’s career quickest and fastest, and shot Fuller up the top of the pack. By the end of the session, Fuller was nestled respectively in the no. 5 position and would take on Clay Millican on Sunday.

The Yas Marina Circuit Top Fuel Dragster smoked the tires on Sunday against Millican, but team members were not discouraged about the overall weekend.

“The track was really cold this weekend and we just don’t have a tune-up for those kinds of conditions. The margin of error on a track like that is just very, very limited. Even when we were in the lanes, there was a light mist, it made the track a little slick and well, it made it difficult for us,” said Fuller.

“We made our career quickest and fastest pass, which says a lot for this team. I’m so proud of all of the Yas Marina Circuit guys, especially with how well we’ve done these last couple of races. We struggled on race day, but we really moved up and we’re running with the top guys after only 8 races all season. You know, that’s nothing to hang our heads about,” Fuller added.

The team next competes in the NHRA Arizona Nationals, October 14-16 at Phoenix Firebird Raceway.