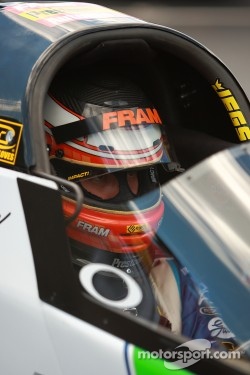 Spencer Massey waits to pull through the tower

LAS VEGAS, October 30, 2011 – Spencer Massey, behind the wheel of his FRAM/Prestone Top Fuel dragster, powered his way into today’s final round of the 11th-annual Big O Tires NHRA Nationals here on The Strip at Las Vegas Motor Speedway and into the lead for the championship.

The 29-year old Fort Worth native’s performance allowed him to go around Larry Dixon and Don Schumacher Racing teammate Antron Brown – who had passed him when he did not qualify for the last race (and those two drivers went to the final round) – to the top of the Countdown to the Championship standings.

According to Massey, he was disappointed by not winning the race, but pleased with the overall results.

“Obviously, I wanted to win, but considering where we’ve come since packing up on Saturday night in Phoenix, we know we’re heading in the right direction,” he said. “If we had said, as we packed up in Phoenix, we’d be runner up in Vegas and leave town with the points lead, we’d have been ecstatic.

“We came to Vegas from Phoenix and spent that Monday testing. Obviously Phil and Todd (Shuler and Okuhara, co-crew chiefs) and the FRAM/Prestone guys figured out what was wrong and corrected it.

“We’re thrilled to be going into the final race of the year in first place with a great chance of winning the championship.”

Massey will take a two-point lead over Worsham into the November 10-13 47th-annual Automobile Club of ¬Southern California NHRA Finals in Pomona. Just behind Worsham are Brown, 14 points out, and Larry Dixon, 44, which means the top four drivers are separated by less than three round wins.

“That final round against Del (Worsham) showed just how close this entire Top Fuel group is – we lost the race by one-thousandth of a second, which is unbelievable,” commented the DSR pilot racing in his sophomore Top Fuel season.

Coming out of the second-starting spot, Massey opened final eliminations with a round-one victory over Ron August Jr. He then collected Rod Fuller in the quarterfinals before besting Brandon Bernstein in the semifinals.

“I can’t say enough about the guys,” he added about the crew which won the Full Throttle Hard-Working Crew Award for battling back after a DNQ to make it to the final round. “They’re the reason we’re in this position atop the standings; they give me a great race car to drive.”