McMillen misses opportunity after another good qualifying effort in Seattle

He bettered his Western Swing performance and reset every personal record along the way, but Terry McMillen finds himself right where he was last season, trailing Kalitta team driver David Grubnic by less than one round of competition for the final spot in NHRA’s Countdown.

McMillen and his Amalie Oil/UNOH/Motor State Distributing Top Fuel Dragster have performed better this season by just about every stat. His team is qualifying two positions better (12.4 in 2010 vs 10.4 in 2011), won more elimination rounds already this season than all of last season and yet he’s still chasing for the elusive last spot in The Countdown to the Championship that David Grubnic currently holds. 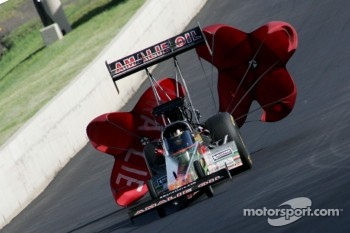 “We missed a big opportunity today,” McMillen said after an opening round loss to Doug Kalitta. “We just couldn’t get a handle on the left lane.”

“I think Richard (Crew Chief Hartman) is making the right call on the tune ups, my driving is getting better and my crew gives me a solid car to go racing with every day. As a team we’re as tight as we’ve ever been right now. I know we can get to where we want to be, but with only two races remaining it’s going to be tough. Those Kalitta guys just aren’t going to pull over and let us go around them.”

The battle for the 10th and final spot will continue in Brainerd, Minn. at the Lucas Oil NHRA Nationals August 18-21.

Can Millican start a winning streak?