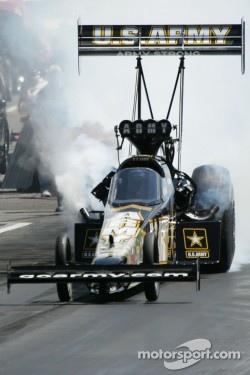 CHANDLER, Ariz., October 14, 2011 - U.S. Army NHRA Top Fuel drivers Tony "The Sarge" Schumacher and Antron Brown finished the first day of qualifying for the Arizona NHRA Nationals second and fourth, respectively, here Friday at Firebird International Raceway. Schumacher, who is still seeking his first win of the season, posted a 3.921-second run at 301.27 mph in the second session, while Brown's best pass of the day, a 3.950-second trip at 306.74 mph, also came in session number two.

"This is a critical weekend for the U.S. Army team if we want to stay within reach of the guys at the top of the standings," said Schumacher. "We need to qualify well and then come out Sunday looking to level everyone in our path."

Schumacher arrived in the Valley of the Sun holding fifth in the standings, 140 points removed from his Don Schumacher Racing teammate, Spencer Massey, in first.

"The rounds of racing are clearly starting to evaporate," added Schumacher. "We need to make every one of them count over these final three races. Of course, we'll also need some help as well, but we still feel we can rise up and win the world championship."

Like Schumacher, Brown traveled to Firebird attempting to bank as many points as he could in an effort to track down Massey, who he trailed by 65 points in second-place.

"That's definitely our strategy for this weekend," said Brown. "We can't let Spencer get away from us. He had a good weekend in Reading (Pa.) a couple of weeks ago, so we have to take care of business here in Phoenix to stay on his tail."