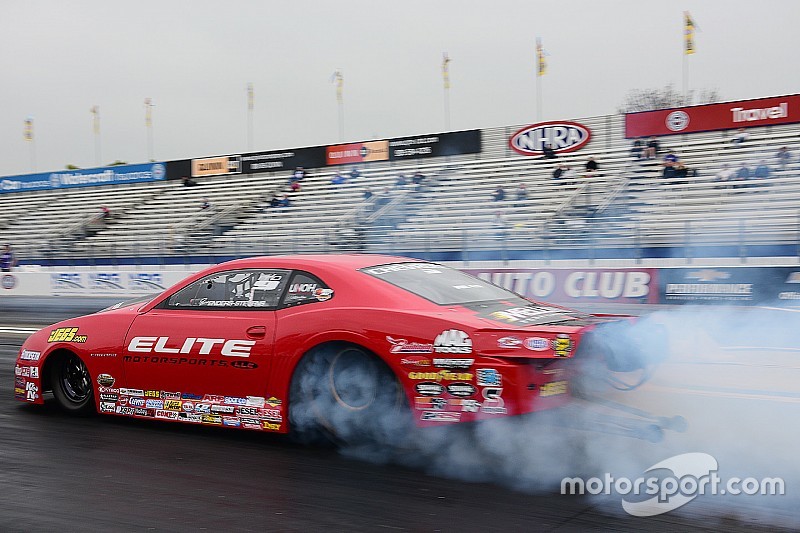 The NHRA has decided to tackle the issue of falling Pro Stock participation by making nine of the races open only to eight qualifiers. Anne Proffit argues that this fails to help the competitors within the category.

For well over a decade, it’s appeared as if the National Hot Rod Association has been allowing Pro Stock to wither, while enticing the nitro classes, Top Fuel and Funny Car, to bloom.

It has presided over a class in which manufacturers have been bowing out, along with sponsors and competitors. Now, the series’ inaction has left a stalwart group in the factory hotrod category, most of them driving the same type of racecar and differentiating themselves through engine-building prowess, chassis decisions and, yeah, money.

NHRA’s senior vice president of racing operations, Graham Light, sent a letter October 3 to all Pro Stock competitors, in which he announced the class would continue participating in all 24 rounds of the 2018 season, but with half the grid places at nine races. The letter was followed a day later by a press release that made Light’s savage block to the knee official.

The manner in which Light composed his letter spoke of the acknowledged challenges NHRA has inflicted on Pro Stock over the past few decades through its failure to update the class. He noted the category has “suffered significant drops in participation over the past 20 years, with participation falling by more than 22 percent since 2010.” The class, he said, has lost more than 50 percent of its competitors in 17 years.

Light claims the series has tried “many approaches” to attempt to bring new blood into the class and give it more sizzle. “To name a few, we tried to get increased manufacturer support and interest; we switched to fuel injection and made other rule changes in an attempt to make the class more fan-friendly and relevant, and we provided increased television coverage.”

The changes were neither user-friendly nor effective. Moving the cars so people could watch the mechanics work was initially met with tool boxes shielding engines. The very quick change to electronic fuel injection [EFI] – from late July 2015 to February 2016 – required skill-sets some competitors lacked – competing became more expensive for the teams, many needing to hire an added data acquisition guy.

As for the added Fox network television exposure, disgruntled Pro Stock racers would argue that’s been minimal and poorly scheduled.

Pro Stock has become a Chevrolet Camaro class, with only a very few Mopar Dodge Darts thrown in - and the top Mopar racer, 2012 champion Allen Johnson, is retiring end of this year. There used to be Ford Mustang models but Ford removed its support for the Mello Yello pro series in 2015, forcing not only Pro Stock but also Funny Car teams to change brands, including the mega-squad of John Force Racing.

Let’s call this what it is: benign neglect. In its push to accentuate nitro-burning Top Fuel and Funny Car classes, NHRA has ignored its Pro Stock competitors to the point of often hiding the class’ paddock from visibility. Bandimere Speedway near Denver is a prime example, where Pro Stock’s garages are at the top end of the track and at least a 15 minute hot-weather hike from the nitro pits.

It’s been suggested by more than one competitor that NHRA consider qualifying segments be shared between Pro Stock and the two nitro classes so that, from time to time, door-slammers are placed between Funny Car and Top Fuel qualifying runs to make raceday eliminations. It would mean a captive audience, with paying fans gaining more interest in the category almost by osmosis. That in turn would be of greater appeal to sponsors (the nitro teams have a propensity for luring away the backers of Pro Stock teams) and generate team interest.

Instead, NHRA plans to make nine of the 24 Pro Stock races eligible to only eight qualifiers. This plan encompasses early- to mid-season races, including the spring Houston event, Topeka, Epping, Englishtown, Bristol, the full Western Swing of Denver, Sonoma and Seattle, along with Brainerd, the penultimate “regular season” contest. “We hope this change in field size at selected events will help increase excitement and fan interest,” said NHRA president Peter Clifford in the press release.

Light, in his note to Pro Stock competitors, stated, “As the sanctioning body, NHRA is charged with making decisions that are in the best interests of the sport of drag racing. Low participation and interest forces us to evaluate the resources being devoted to the category in light of the indicators trending downward.”

If Light, Clifford and the other managers at NHRA are so concerned, why aren’t they looking at promoting the very successful young guns currently racing in Pro Stock that have brought millennial interest to the class –drivers like Erica Enders-Stevens, Tanner Gray, Vincent Nobile, Drew Skillman and Alex Laughlin?

Why isn’t NHRA looking at the meager fields currently racing in Top Fuel and Funny Car as well? These days, it seems only Pro Stock Motorcycle manages to send home more than one or two non-qualifiers at their 16 annual events.

It seems NHRA is the flawed body here, not the competitors in Pro Stock. The sanctioning body ignores this once-popular and successful category in the interest of fast money it thinks it’ll continue receiving from the nitro classes. The diverse innovation and technology inherent in Pro Stock drag racing should not be cast aside.

DeJoria's retirement is a sad loss to NHRA and its fans