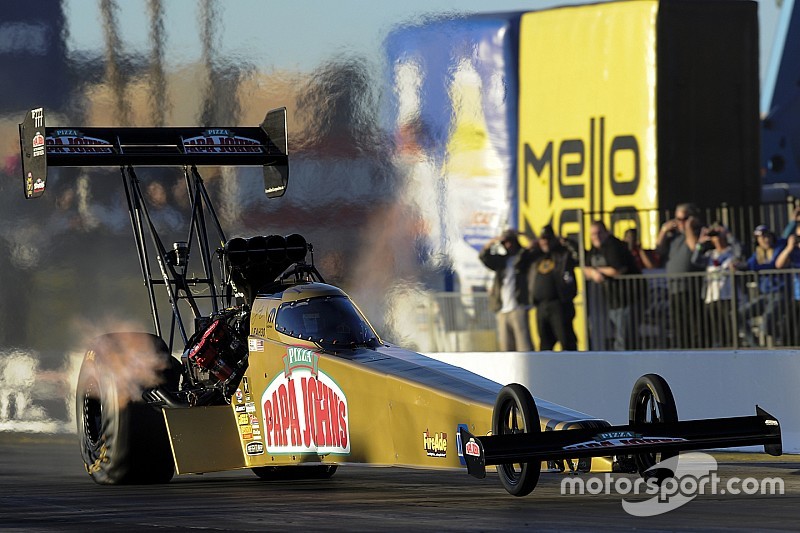 Leah Pritchett, who set an unofficial record in testing at Wild Horse Pass Motorsports Park, has now a done the job “for real” with a sensational 329.34mph pass at the NHRA Arizona Nationals.

When NHRA held its nitro tuneup at the venue just outside Phoenix, Ariz., her 3.654-second pass in Don Schumacher Racing’s Papa John’s Pizza dragster was an eye-opener but didn’t count as a record as it wasn’t achieved on a race weekend.

However, Pritchett has done it again, during the second qualifying session, making the final pass of the day down the 1,000-foot dragstrip in a time of 3.658secs.

The exulted Pritchett said: “This car has been constantly fast and quick and sometimes it’s difficult to understand,” she said. “It’s almost too good to be true but it’s not. This team has given extra attention to detail I’ve never seen before and given me unbelievable confidence in this car. Officially I’m now the quickest in the world - but the other guys are not far off,” Pritchett exulted.

Pritchett, the defending race winner here, and winner of this year’s season-opening race at Pomona, said there was “a world of difference” between a 3.7sec run and turning a 3.65.

“There’s a real sensation of speed; the car gets much lighter,” she said. Every time I get into the car it’s fast but this definitely feels different. I know what to do with how light it feels right now; I know what those fastest times feel like.”

Pritchett was quick to acknowledge the huge part played by the DSR team, which took her in after Bob Vandergriff shuttered his squad not long into the 2016 seasonm, and the chance to learn from her teammates, eight- and three-time champions Tony Schumacher and Antron Brown. The trio dominated the time sheets today with sub-3.7sec passes

“I’m the luckiest person to be here doing this,” she said, “and I’m working really hard at the job. I dream about the things I can control when these expectations are really high. At some point the others will catch up and I’ll make some mistakes.

“We’re focusing on things we can do better, not just what we’re doing now. During the off-season I prepared to beat people like Tony and Antron and pushed myself to be a better driver.”

Pritchett paid tribute to her crew, led by Todd Okuhara, who actually gave Leah Pritchett her first nitro Funny Car test back in 2009.

“I want fans to look at my crew guys, not just me. I always find a way to shed the light on my team,” she said. “Todd has a very level head; he told me he’d make more mistakes than I would but that we had to work together.

“His way of calming me has a lot to do with our performance. He gives me tips and makes me feel like I’m a bigger part of this team. What he puts in the car, what he says it’s going to run, 90 percent of the time the car does that.”

Johnson Jr., Pritchett and Line are No. 1 qualifiers Saturday at Arizona Nationals